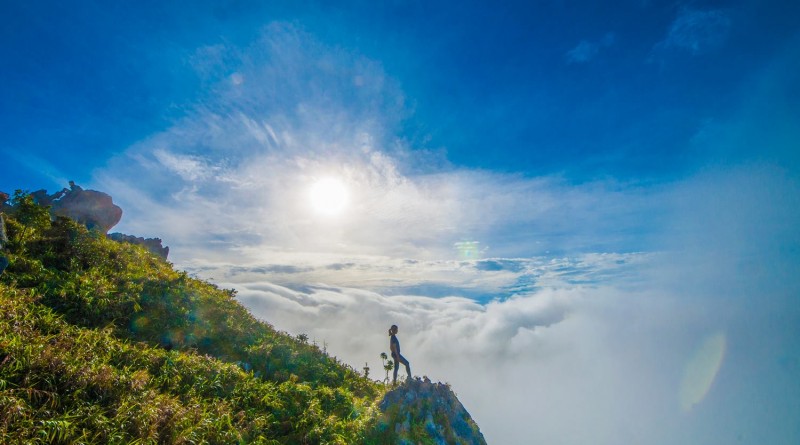 If there’s a prominent rock or outcrop on or near a Philippine mountaintop, chances are people in tights or muddy cargo pants are standing on it, drawing an imaginary bow like Hercules shooting the man-eating birds of Greek mythology.

Popularised in more recent vintage by Usain Bolt to celebrate his world record-breaking sprints, the pose is a global symbol of youth, strength and virility and for the recent visitors to our mountains, signifies conquest: I am Hercules the demigod. I have reached the top, conquered my fears and limitations to finish difficult labours, and there are no bounds to what I can achieve.

That there have been more and more of these photos on social media is testament to the astonishing popularity of hiking in the Philippines. It’s the new badminton, one could say, harking back to the times not long ago when long distance running became the in thing to do instead of smashing shuttlecocks for the freshly empowered new members of the labour force looking for an outlet to spend their time, energy and disposable income. Now, it is no longer enough for runners to pound the city streets on weekends. They are venturing to places where the asphalt ends and eventually end up on mountain trailheads.
The country’s changing demographics are helping to usher in this hiking revolution. The country is at a stage where the working-age segment of the population outnumbers the non-working dependents. This equates to increased spending power — be it for badminton racquets, running shoes and garments, or tents, backpacks and camp stoves. The median Filipino age is 24.4 years. There is a lot of pent up hormones and testosterone in there.

Still, leisure costs money. It used to be that the average Filipino’s definition of a vacation is to crash a relative’s or friend’s home and let the sucker spend for their stay, but with the existential yearning for peace and quiet away from the workplace, as well as the search for a standout activity — such as standing on a ledge beside a cliff — mean that is no longer sufficient, at least for the younger, more active and more adventurous set.

Hiking, or backpacking for people who prefer to spend more time up there in the mountains, seems tailor-made for these. One does not need $1,000 mountain bikes or expensive scuba gear to enjoy the activity. One only needs a pair of trekking shoes worth a few bucks used, and bus fare to get to the trailhead. There are no uniforms to spend for, no balls nor racquets. Tents and other camp gear are optional because the emphasis is on speed and bang for the buck. A destination has to be reached within a day — preferably half a day so that the gang can go on a sidetrip like the beach or some obscure waterfall, and still be home for dinner. There is a sufficient suggestion and thrill of potential danger, without actually having to hang on a rock face by one’s fingertips like freestyle wall climbing, to make it interesting.

The power of the Internet means easier access to the range of destinations available. The country has hundreds of mountains, one only basically has to learn how to get to the trailhead. For a fee, trips, guides, and vehicles can be arranged on social media so it is now entirely possible to be climbing with — or even sharing a tent tonight with — somebody you have never previously met. Still, budget constraints remain and so there is a bias for the near mountains: near Manila, like the Rockies of Mount Maculot where, for a minimum effort, people can take selfies of themselves at sunrise with a stunning backdrop of Taal lake; or near Baguio, where hundreds of people queue up on weekends to have their pictures taken on the modest Gungal rock of the Ampucao-Santa Fe ridge, which the newbies conveniently call “Mount Ulap”.

This accessibility though is sometimes its own worst enemy, when training is eschewed in the rush for instant gratification on the part of the hikers, and tour organisers and other components of the new backpacking economy’s value chain chase profits at the expense of safety. To put it succintly, backpacking is the deadliest outdoor activity in the Philippines, with at least 39 recorded fatalities since the 1970s. More than half were claimed by flash floods. No other sport or outdoor pursuit comes close — not skydiving or BASE jumping, not canoeing, not running or cycling, and certainly not badminton.

I have been privileged to have been part of this hiking boom, and though I was late into the game, I have managed to witness its liftoff from about 11 years ago, the year Filipinos reached the top of Mount Everest for the first time. This pursuit has given me some of the greatest joys in my life, but also some of its worst moments, including when I lost two friends to a backpacking tragedy. As we approach the apex of its popularity, I am one of the few who earnestly believe that there is room for all of us on our country’s mountaintops.

(Blogger’s note: This was originally posted on Cecil Morella’s Facebook page as “Hercules on a mountaintop”, and republished with permission from the author)