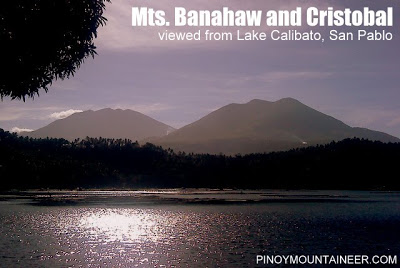 Starting December 2009, PinoyMountaineer.com will report, repost, and review mountain-related news and render some opinions regarding these developments. Blog readers are encouraged to discuss these news and views by commenting.
THE NEWS
Last week, President Gloria Macapagal-Arroyo signed Republic Act No. 9847, which establishes Mounts Banahaw and San Cristobal in Laguna and Quezon as major watersheds and protected areas. The law ensures the protection and conservation of these areas, particularly the forests and the diverse plants and animals they host. The Mts. Banahaw-San Cristobal Protected Landscape covers a total land area of 10,900 hectares in the municipalities of Sariaya, Candelaria, Dolores, Lucban, and Tayabas in Quezon; and the towns of Rizal, Nagcarlan, Liliw, Majayjay and San Pablo City in Laguna.

As provided for in the Constitution, the management and authority of the area will be handled by a Protected Area Management Board (PAMB) which will be chaired by the Regional Executive Director of the Department of Environment and Natural Resources.

MY THOUGHTS
1. I do hope this will go beyond mere document. Look at Pico de Loro and other so-called “protected areas”. I am quite skeptical about these declarations. Even Mt. Pulag is facing illegal logging at the moment even with a very feisty PASU, Emerita Tamiray.

2. Senator Pia Cayetano should climb Mt. Cristobal (I’ll gladly accompany her) before she lumps it in the category of Mt. Banahaw. Senator Cayteno was quoted last March saying, “While it is widely regarded as a sacred place, Mounts Banahaw and San Cristobal have not been accorded due respect and have not been spared from human exploitation,” Cayetano said. The lady senator wants a continued hiking ban on both Cristobal and Banahaw until 2012. While we are very grateful for the senator who continues her crusade to protect the environment, we would like to point out to her that Cristobal’s trails are very clean, was always that way and is so unlike Banahaw’s. The mob doesn’t go there during Lenten Season. Bulk of trash from Banahaw in the past came from the thousands of locals who flock to the mountain, camping there for several days — this is not the case with Cristobal.

3. We applaud Sec. Lito Atienza when he said that the Department of Environment and Natural Resources (DENR) would be stricter in prohibiting kaingin (slash and burn farming) and mining activities. As quoted from Inquirer.net he says: “The law will take effect [all the way] to the barangay level,” he added. “It will prevent further degradation and protect the landscape. It will also ensure that the PAMB will function.” Fotunately, Lito Atienza said both mountains would remain open to hikers and pilgrims “so long as they will take their thrash with them [when they leave]. ” Of course! Regulation, not indiscriminate prohibition, is the key.

4. The status of Cristobal as of now is still open – there is a caretaker in the Montelibano house and there’s a logbook also. I was just there last Saturday. For Mt. Banahaw, officially you have to get a permit from the DENR in Pagbilao, Quezon. However, a lot of groups are still able to climb Banahaw without a permit.

sir gid, i would like to use your picture of cristobal and banahaw together.
thnx a lot sir gid

good tidings to everyone

Thank you for clarifying that Sen. Pia Cayetano never accused the mountaineers of having contributed to the deterioration of the mountains. She knows and understands the discipline of mountaineers because as many may not know, she's a mountaineer herself. May I add that before she sought the passage of the bill creating Mts.Banahaw-San Cristobal Protected Landscape (MBSCPL) into law, she
made sure that all stakeholders, including mountaineers, were consulted. Hence in the law, NGOs and people's organizations now have the opportunity to contribute to the management of the mountains thru membership in the Protected Area Management Board.

And finally, thank you for your offer to help the senator in her advocacies. This is a welcome step, particularly from everyone who shares her passion: protection of our environment, our women and children and improved health care for our generation and the next. Our legislative staff will discuss and find a good time to gather the mountaineering community and hear all your related concerns on
Banahaw-San Cristobal and other mountains.

Are you the one I incidentally riding on the bus-bound to cuenca/maculot early 2009? if yes…I was one trekking late following my colleagues on summit.Nice hearing from you then,anyway got your number.

Happy Holiday's to Everyone,
i organized a climb last april to try climbing mt banahaw and mt cristobal, both during that lenten season, despite of the fact that i already heard that the mountain is still closed…we arrived holy tuesday around 430 am. we stopped in kinabuhayan barangay hall to register. since it wasnt my first try to climb banahaw during lenten season, i wasnt quite surprised about the plethora of vendors…but what astounded me the most were the number of militaries that are in the area. i tried talking to them to allow us to climb but they insisted we can not. I went back to the barangay hall and tried talking to some locals for backgrounds about the closure in the area. To my surprise, there were "allegations" that there were several "mountaineers" that tried climbing and were allowed to, but to later be arrested along the trail and be taken to Lucena to pay 5000 pesos, also, there were "claims" that the locals hear heavy equipment noises during wee hours. Whether there is truth to what they said, i firmly agree with what the host of this site stands, that it is not the mountaineers (and i am speaking of real mountaineers) that is the culprit of the degradation of Mt. Banahaw. But it is likely instead that those who are conducting "irresponsible" pilgrimage during the lenten season. The authority should see it for themselves, it is like a "LUNETA PARK" during that time. To make things worst, garbages were all around the foot of the mountain.
We decided to climb Mt. Cristobal instead. And I will support Gid's stand that the case there is way beyond comparison to Mt. Banahaw. Although, the camp site after the crater and before the summit, somewhat stinks.
Me and my group will be glad to support any reasonable moves from Pinoy Mountaineers for the benefit of Mt. Banahaw and Mt. Cristobal, and any mountain for that matter.