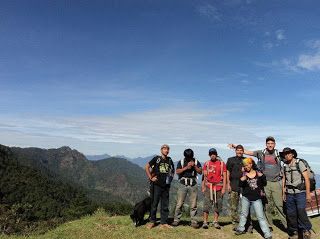 Sagada is a popular tourist destination located north of the Philippines with some 25,000 foreign and local tourists visiting the place in a year especially on the peak months from November to May. What attracts visitors here is attributed to a number of natural attractions found including caves, rice terraces, woodlands, limestone rocks, expansive views of majestic mountains, and waterfalls to add to a cool to warm weather during summer.

Sagada is a landlocked town of Mountain Province with elevation ranging from 1,313 meters above sea level from the lowest level along the Tetep-an Sur Bontoc border and 2,318 masl in Mount Kaman-ingel. It is 415 kilometers from Manila via Baguio, 150 kilometers from Baguio and 18 kilometers from Bontoc, the capital town.

The 9,969 hectare town is enveloped between the main Cordillera and Ilocos ranges. It is bounded on the north by Mt Sisipitan, a tri-boundary of Besao and Sagada municipalities of Mountain Province and Abra province; on the east by Bontoc; Mt Polis, Mount Bessang and Tirad Pass composing tri-boundaries of Bauko, Tadian municipalities and Sagada on the west; and Mt Kalawitan of Sabangan in the south.

The neighboring mountainous terrains of Bauko, Sabangan, and Bontoc towns cradle the watersheds of the mighty Chico River which feeds irrigation water into the lowlands of Isabela and Cagayan Region. Some of the watershed mountain-boundaries in these neighboring towns are Mounts Polis, Nintengley, Tinangdanan, and Babandilaan where this trek shall be.

This 6-day trek attempts to raise awareness on watershed protection including prevention of forest fires which begin early on February-March. Forest burning around the peripheries of Sagada including towns of Bontoc, Tadian, Sabangan, Bauko, and the other provinces of Kalinga, Ifugao, Abra, and Apayao has become a regular occurrence which leaves the mountains black and biodiversity disrupted killing young plants and animals in the forest. Due to the burning heat, rats run down from the mountains bringing more havoc in rice and corn fields. More alarming is the furtherance of depletion and drying up of water sources.

In Sagada, water sources are found in different locations of the town within the 19 barangays including Gosod watershed covering 200 hectares in the northern barangay of Aguid and from the ‘Mission’ waters in the Poblacion area. While water may be abundant in the rainy season, the dry season is a boon to the community as ricefields dry up due to scarcity of water and tourist accommodations experience lack of water. Ensuring the continuity of water supply has much to do with protecting and nurturing the watersheds around the town’s mountain boundaries. This includes planting trees and preventing forest fires.

Sagada Watershed Trek 2011 sends the message that watersheds needs protection to ensure a sound environment and water supply and a cool and happy environment to live in.

As part of its environmental cause, the sponsoring organization,Sagada Night Trekkers with the Sagada Environmental Guides Association (SEGA) shall be co-sponsoring essay writing and song writing contests to youth and school children in cooperation with other agencies. Some proceeds also of the trek shall be used for environmental management to include tree planting and education-information campaigns in schools; and organizing volunteers for barangay-based volunteers for environmental protection especially among the youth.

Sagada Watershed Trek 2011 makes up two packages one can choose from, a 6-day trek with a base camp in Gutang, Balintaugan and a 3-day trek passing through Marlboro, Suyo, Sagada. The trek covers sightseeing, bonfires, sharing trekking stories, caving, spelunking, passing through waterfalls and river trails. It starts a week before the annual Town Fiesta and Festival on January 29 – February 2, 2011.

The 6-Day trek makes a Base Camp in Gutang. Gutang is a sitio of nearby Bauko town. The base camp is located atop a rolling hill near the barangay of Balintaugan. Abundant water is found here making bathing and washing a treat from hours of trekking. From Gutang, one can see a view of the historical Tirad Pass where General Emilio Aguinaldo made his famous escape from the American troops in 1899. 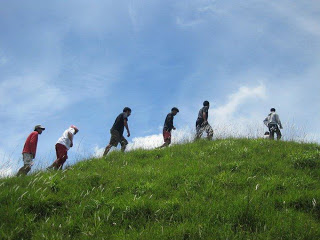 Day 1. Trekking starts from Poblacion Sagada around 8 o’clock to reach Gutang after a 2 hour hike. Lunch is served here along with the setting up of the camp. The rest of the day is spent in visiting Balintaugan and viewing expansive sights of the mountains of Polis, Babandilaan, Nintengley, and Tinangdanan. Night goes swell with bonfire and jamming.

Day 2. This day starts the trek to Mt Babandilaan reaching an elevation of 2,365 meter above sea level. It takes two hours to reach the peak passing through mossy forests. Wild flora and species are found here including the giant pitcher plants. Lunch shall also take place at the peak of the mountain. From Mt Babandilaan, one can see a territorial coverage of the provinces of Ilocos Sur, Quirino and Abra.

Day 3. Mt Tinangdanan with an elevation of 1,719 meters above sea level is a sight to behold. Wondrous and expansive sights of the towns of Besao, Sagada and Tadian can be seen from here. Trekkers shall be passing along the village of Maket-an of Tadian town where fresh water cress is found. Lunch shall be served at the peak of Mt Tinangdanan.

Day 4. After 2-3 hour hiking in open spaces and mossy forests, one reaches Mt Nintengley with an elevation of 1,861 masl which rewards views of Bauko and Tadian municipalities.

Day 5. Mt Polis with an elevation of 1,829 masl rewards the trekker with refreshing views of Bontoc town on the eastern side and proportional heights of Mt Kalawitan located in Sabangan municipality. Mt Polis is located between Mt Nintengley and Mount Babandilaan.

Day 6. A refreshing trek back to town passes through a river trail and waterfalls in different locations- Bakkong, Mapuwa, Payas, Ma-ed, Pagalawa, and Bahi.

This trek covers camping, sightseeing, and caving. From the trail going to Batalao along the Dantay-Sagada Road, trekkers follow a two- hour hike to Marlboro. Why it is called Marlboro is interesting as horses are found on the hills. One is reminded of the popular advertisement of the equally popular Marlboro cigarettes with Marlboro man Darrel Winfield on horseback lighting up the manly cigar. But hey…those horses yonder in Marlboro are slowly disappearing to nowhere?!?

Limestone walls are also a sight to behold. Along the trail, one is treated to a blue mass of soil cascading from a rock which gets naturally pulverized and spreads down the hill making the place called Blue Soil. Camping is set up here with bonfire and jamming in the two evenings. Trekkers follow the trail towards Alab barangay of Bontoc to catch a view of the winding Chico River and have some chats with pocket miners here. Caving follows and trekkers proceed to barangay Suyo of Sagada going to Balangagan Cave. A jeepney ride from Suyo gets the trekkers back to town after caving.

Registration at P1,900/day covers food in the camp, guiding fees, and a trekking certificate; and porter fees separately charged at P500/day. The cost is negotiable atdiscounted rates if in group. Partial payment is collected and the rest of the payment paid on or before the trek. Please take note that advance payment is non-refundable. The cost does not cover transportation fees as plane or bus fares; and meals/lodging fees while in town. The trekker is advised to bring his tent/camping gear.For interested trekkers to join Sagada Watershed Trek 2011, copy paste the Registration Form below, fill in the details, and send to night_treck@yahoo.com.ph. Contact Alwyn Piluden atnight_treck@yahoo.com.ph for more details.

Note: Partial advance payment amounting to half of the total cost is not refundable.

Dear Customer,SPORTS BIKE LTD is one of the
Best Selling Bike Distributor.We are Legitimate
registered Company under licensed number
(06489857).

We have a promo going on now on our best
offer,We ship via UPS, and your ordered items
will get to your door step within 48hrs(Two
Working Day).

If you don't see ur choice here u can ask for full price list ok.

and many many … models available at this
special price.If you are interested please reply Us via mail.

if ganun nga talaga then, wow…