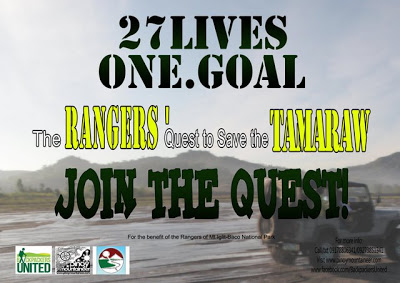 Project Tamaraw: Climbs for a cause
27 Lives, 1 Goal: The ranger’s quest to save the tamaraw

Three exciting climbs will be organized in the coming months under “Project Tamaraw“, a worthy endeavor that aims to raise 50,000 thousand pesos in cash and equipment for the benefit of DENR-Tamaraw Conservation Center Rangers patrolling the grounds Iglit-Baco National Park in San Jose, Mindoro Oriental, one of a few known natural tamaraw breeding areas. Members of the UP Med Outdoor Society and Backpackers United are organizing this event, and I wholly support this endeavor!

The project also aims to increase awareness of Iglit-Baco National park as an eco-tourism site; educating prospective tourists on the importance of saving the tamaraw from extinction, the work the DENR Tamaraw Conservation Program and it’s rangers do, as well as generate extra income for the project, it’s rangers, and the local municipality covered by the Iglit-Baco National Park where the program is based.
The project aims to raise the funds and equipment through a series of charity climbs and awareness campaigns to be held at Mt Talamitam, Batangas, Mt Pulag, Benguet, and Mt Iglit, Mindoro, with a climb organized for each month from December to March.
Proceeds and donations from the charity climbs and sponsors will be used for the purchase/ acquisition of tents, rechargeable lamps, headlamps, bags, and patrol shirts to be used by the DENR Rangers Patrolling theTamaraw breeding areas in Iglit-Baco National Park.
BACKGROUND
The tamaraw conservation project was started during the Marcos administration to prevent the extinction of tamaraws. It is a special project under the Department of Environment and Natural Resources, with its own separate funding and office with headquarters in San Jose Mindoro. The project’s area of responsibility includes the entire hectares covered by the Iglit-Baco National park which has been identified as the primary habitat of the tamaraws.
The project aims to achieve its goals through research and breeding projects; through identification and protection of tamaraw habitats; and conducting tamaraw monitoring activities, such as annual counting and tracking activities.
At the frontline are a group of 27 rangers, some drawn from DENR staff but mostly locals who have volunteered for the task. Theirs is a full time job. Each ranger is required to spend at least 11 days of every month at one of 2 ranger stations found within the heart of the park, either of which is a 3-4 hour hike from the nearest source of electricity or running water. From the stations the rangers conduct monitoring activities, help educate and organize local tribes towards conservation efforts, and go on patrols against poachers, loggers and other activities harmful to the park and the tamaraws.
In return for their effort and dedication, the government considers them contractual government employees which entitles them to the minimum government salary grade and none of the benefits such as tenure, medical and dental coverage or 13th month pay. They are also expected to purchase and maintain their own equipment, including such basics as flashlights, batteries, footwear, and backpacks; all of which are necessary to conduct their work.
To augment their income a lot of the rangers do odd jobs as construction or carpentry hands in the city on their off days. During duty days the weave baskets or make brooms to sell on off duty days. Many of the rangers have been contemplating seeking employment elsewhere but have stayed on the past 5-20 years because no one else will do the job if they don’t.
Project tamaraw is our own chance to make the ranger’s job a little easier; but more important show them that other people also care for the cause they have given lives to.
Project goals:
1) To gather 50k worth of cash and goods, for the benefit of the Tamaraw rangers in Iglit-Baco National park
2) To buy/accquire:
a. 4-6 units, 2-3/3-4 person tent
b. 2-4 units, Self rechargeable solar lamps
c. 10-30 units Head lamps, spare batteries
d. 5-15 units, 30- 40L Bags for use on patrols
e. 27 units, Long sleeved shirts for use on patrols

1 Comment on "[UP Med Outdoor Society] Let’s support “Project Tamaraw: Climbs for a Cause”!"