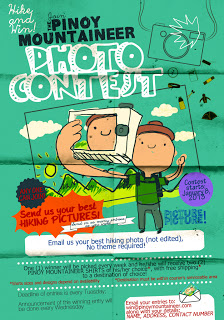 Moreover, as a prize, The Perfect White Shirt will send two PinoyMountaineer shirts to the winner, in his or her nominated mailing address (within the Philippines only). The delivery of the shirts is free of charge to thhe winner.

The contest is open to anyone, anywhere around the world, but the delivery of the prizes is restricted to the Philippines. To avoid conflict of interest, my hiking companions are not allowed to join the contest.

Judging will be exercised by the blogger assisted by up to four co-judges, one of which will be nominated by The Perfect White Shirt. The decision of the judges is final and cannot be questioned.

JUDGING
This is NOT a popularity contest, and having the most number of likes will not garner any points. In fact, the only photo that will be posted each week will be the winning photo. Some of the criteria that will be used include the following:

1. Uniqueness: The ability to convey a novel experience, whether in terms of the place, the time, the fauna or flora, or the people. For instance, cooking rice itself is not unique, but doing so amid G2’s Knife Edge will make the photo remarkable. Following this criteria, jump shots, being very commonly done, do not score highly unless the background is really unique.

2. Human interest: the ability to capture the interaction between man and mountain. Does the photo capture human emotions, like excitement, difficulty, pain, joy, victory, camaraderie, friendship, or even love? It is also possible to achieve this without human presence in the photo. For instance, if you capture a cloud that has taken the form of a heart, the ‘persona’ of the cloud takes on a very human meaning.

3. The ability to inspire: does the photo make you want to go outdoors? Such is the potential of photography that we wish to see and share in this contest. This ‘ability’ is hard to articulate, but involves an intricate formula of beauty, motion, and life.

4. Adherence to the theme: Occasionally, we may announce certain themes for a given week or month, for instance, “Old School Photos”, “Beyond the Philippines”, “Tribal Encounters”, etc. The theme will be announced at the same time that the latest winner is announced.

HOW TO SUBMIT
Email your photo/s to win@pinoymountaineer.com. No other method of submission is allowed. Participants should NOT email photos in the PM Facebook page.

MECHANICS
Each contest week runs from Tuesday to Monday, the first of which will commence on January 8 to 14.  The judging will be held from Monday evening to Tuesday afternoon. The winners will be announced every Tuesday evening on the PinoyMountaineer Facebook page. Winners will be notified by email, and the winning photos posted in the PM Facebook page.

TERMS AND CONDITIONS
1. Photos may be taken at any time and any place. However, there are times when up-to-date photos may score higher points in the uniqueness and human interest criteria. For instance, a mountain photo on New Year’s Eve with fireworks on the background may score highly during January.

2. Edited photos are disqualified. By “edited”, I mean “Any attempt (a) to alter the visual elements and color properties in the photograph to the extent that it is no longer similar to the original, (b) to introduce new elements in the photo that are not originally there, or (c) to remove existing elements in the photo to make it more appealing.” Cropping the photo, changing its file format, modifying the brightness and contrast a little bit, do not constitute “editing” in this sense. This comment is considered part of the Rules and I will incorporate it in the post in PM I will appeal on the honesty on my fellow mountaineers on this note.

3. Photos submitted for a given week may still be considered for the two succeeding weeks.

4. By submitting photos, you declare yourself to be the proprietor of intellectual property rights inherent in the photo, and grant PinoyMountaineer and its co-presentors or sponsors, if any, the perpetual right to post/publish your photos – in its original or modified form – online, in print, or in other media, without any further consent required, nor any compensation thereof.

5. Themes may be set for a particular contest week or month. In the absence of any announcement, however, there is no theme and the other criteria for judging will apply.

9 Comments on "Announcing the PinoyMountaineer Photo of the Week Contest!"

hi S' Gideon, i just sent my entry for this photo of the week contest. hope you like. 🙂

"2. Edited photos are disqualified. I will appeal on the honesty on my fellow mountaineers on this note. "

"2. Edited photos are disqualified. I will appeal on the honesty on my fellow mountaineers on this note. "

anyone who has a dslr or hightech camera will win this contest..