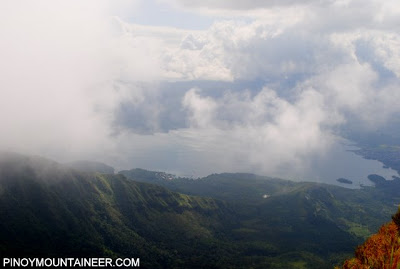 The first featured hiker on our list is Fedor Jagor
(1816–1900), a German scientist and explorer who traveled in the Philippines from 1859-1860. This account, originally in German and later translated in English, is probably the first to describe hikes up Bicol mountains. After Mt. Isarog (Hikes in Philippine History #1), we continue with his account about Mt. Asog, which he referred to with its alternate name, Mt. Iriga.

From the Isarog I returned through Naga and Nabua to Iriga, the ascent of which I at length accomplished.The ascent.The chief of the Montesinos had received daily rations for twenty-two men, with whom he professed to make a road to the summit; but when, on the evening of the third day, he came himself to Iriga, in order to fetch more provisions, on the pretext that the work still required some time for execution, I explained that I should endeavor to ascend the mountain on the following morning, and requested him to act as guide. He consented, but disappeared, together with his companions, during the night; the Filipinos in the tribunal having been good enough to hold out the prospect of severe punishment in case the work performed should not correspond to the working days.

After fruitless search for another guide, we left Buhi in the afternoon, and passed the night in the rancho, where we had previously been so hospitably received. The fires were still burning, but the inhabitants, on our approach, had fled. About six o’clock on the following morning the ascent began. After we had gone through the forest, by availing ourselves of the path which we had previously
beaten, it led us through grass three or four feet in height, with keen-edged leaves; succeeded by cane, from seven to eight feet high, of the same habitat with our Arundo phragmites (but it was not in flower), which occupied the whole of the upper part of the mountain as far as the edge. Only in the ravine did the trees attain any height. The lower declivities were covered with aroids and ferns; towards the summit were tendrils and mosses; and here I found a beautiful, new, and peculiarly shaped orchid.

The Cimarrons had cut down some cane; and, beating down our road for ourselves with bolos, we arrived at the summit a little before ten o’clock. It was very foggy. In the hope of a clear evening or morning I caused a hut to be erected, for which purpose the cane was well fitted. The natives were too lazy to erect a lodging for themselves, or to procure wood for a watchfire. They squatted on the ground, squeezed close to one another to warm themselves, ate cold rice, and suffered thirst because none of them would fetch water. Of the two water-carriers whom I had taken with me, one had “inadvertently” upset his water on the road, and the other had thrown it away “because he thought we should not require it.”

Altitude.I found the highest points of the Iriga to be 1,212 meters, 1,120 meters above the surface of the Buhi Lake. From Buhi I went to Batu.

The Batu Lake (one hundred eleven meters above the sea) had sunk lower since my last visit in February. The carpet of algae had increased considerably in breadth, its upper edge being in many places decomposed; and the lower passed gradually into a thick consistency of putrid water-plants (charae, algae, pontederiae, valisneriae, pistiae, etc.), which encompassed the surface of the water so that only through a few gaps could one reach the bank.

Right across the mouth of the Quinali lies, in the lake, a bar of black mud, the softest parts of which were indicated by some insignificant channels of water. As we could not get over the bar in a large boat, two small skiffs were bound together with a matting of bamboo, and provided with an awning. By means of this contrivance, which was drawn by three strong carabaos (the whole body of men with evident delight and loud mirth wading knee-deep in the black mud and assisting by pushing behind) we succeeded, as if on a sledge, in getting over the obstacle into the river; which on my first visit overflowed the fields in many places, till the huts of the natives rose out of the water like so many ships: but now (in June) not one of its channels was full. We were obliged in consequence to continue our sledge journey until we were near to Quinali.

Blogger’s note: Again, Fedor Jagor failed to see a clearing at the summit of Mt. Asog — too bad for him! But it seems that he has a relatively fast pace as it only took him four hours to reach the summit from the trailhead. Yes, dayhikes were already in done in the 19th century!