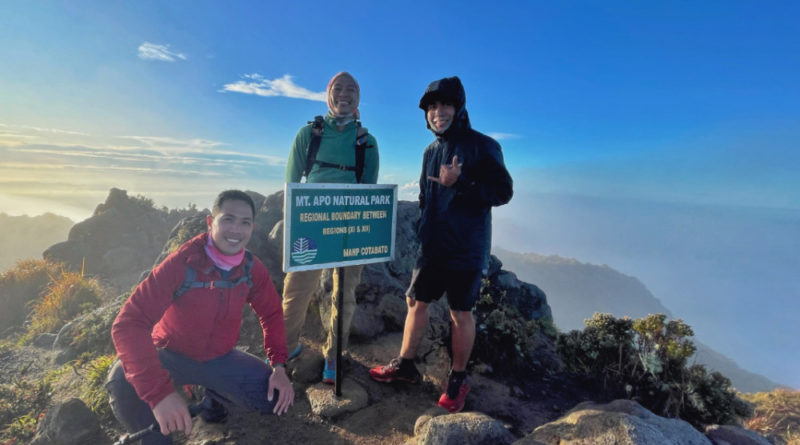 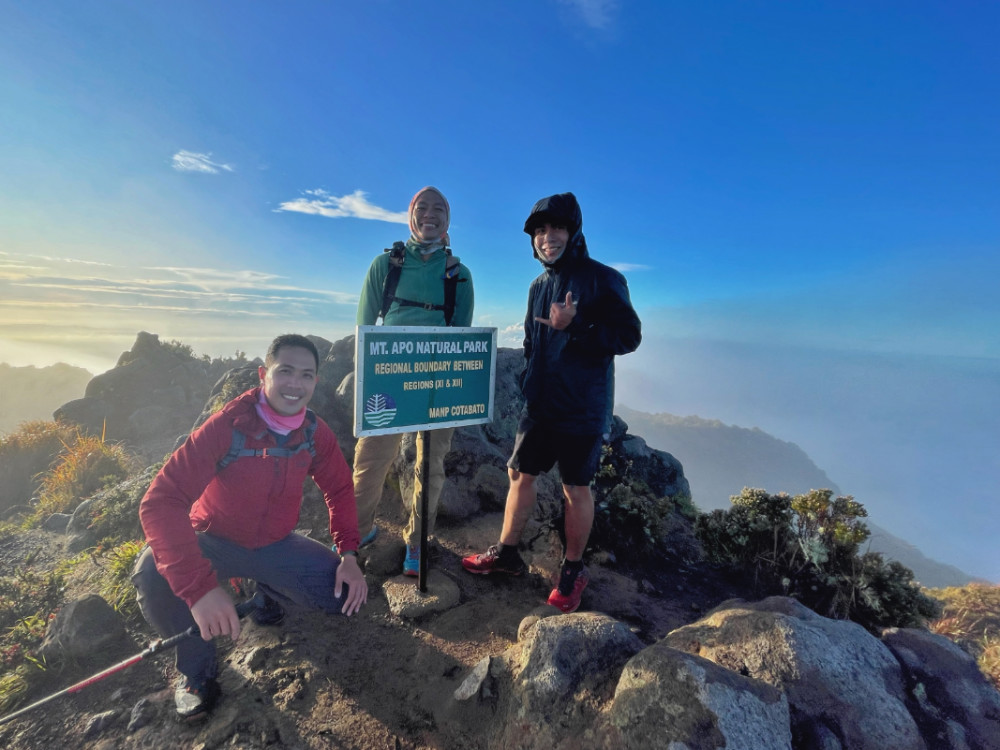 DAVAO CITY – I am so thrilled to be back in the mountains of the Philippines with a successful ascent of Mt. Apo via the Santa Cruz trail on April 24-25, 2022! This is my fifth up the country’s highest peak (2005 -Kidapawan, 2010- Kapatagan-Kidapawan, 2011- Talomo-Apo Traverse, 2014- Kapatagan, 2022-Santa Cruz), and only my first overnight hike in the Philippines since the pandemic started, given that I had been in Latin America for a year. Joining me this time were my longtime hiking buddies Jeshua Sales and Daryl Comagon, and guiding us was Clyde Gingco. 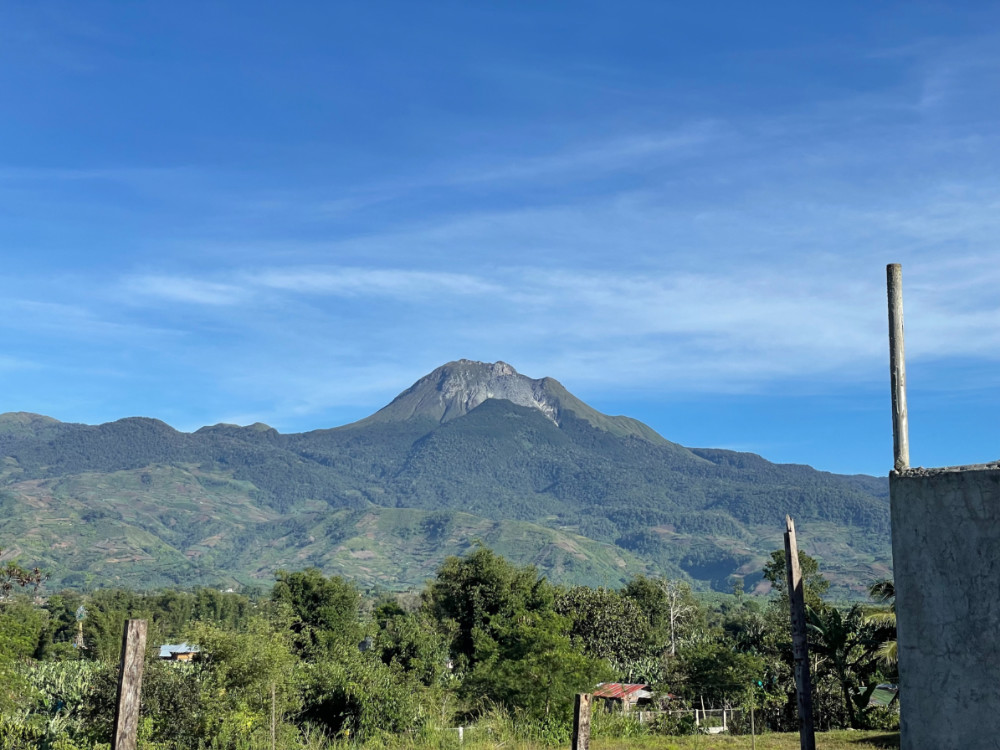 Leaving Davao at around 5:30, we headed to Kapatagan which has its own namesake trail that leads to Mt. Apo. From there we took a small truck to the trailhead below in Sitio Colan. What ensued was about an hour of trekking through there sitios (Colan to Tambis), the entering the lower montane forest that was soon surrounded by tinkaran trees. 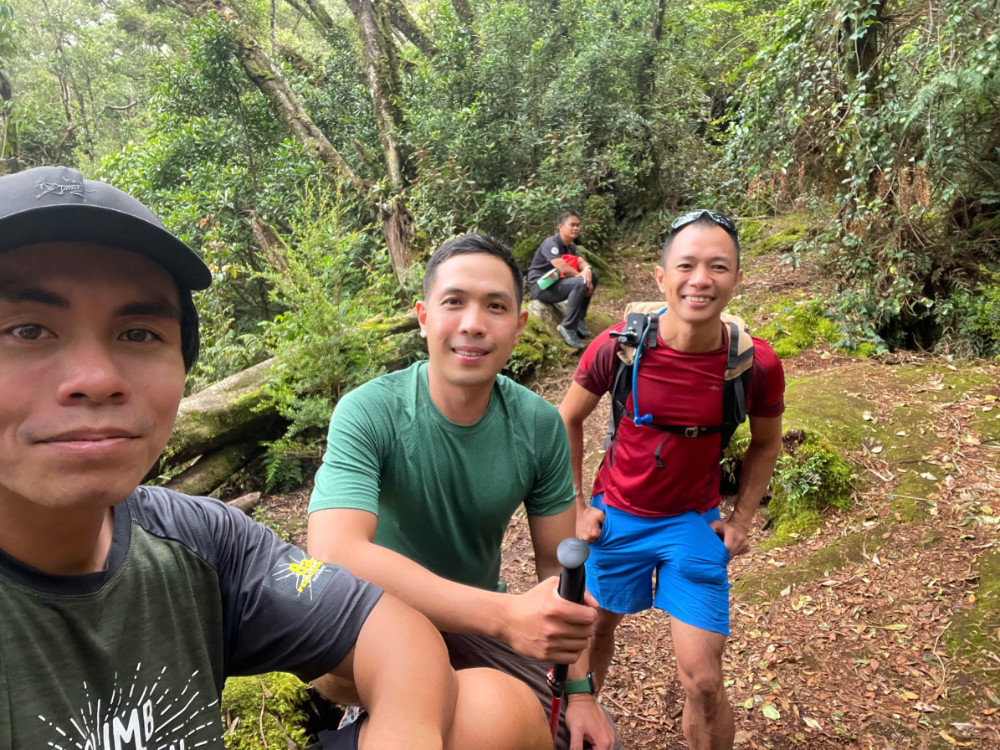 By noontime we had arrived at  Tinkaran Campsite 1, and had quick link there. This campsite is basically the major campsite of the entire Santa Cruz trail, complete with a water source and macaques aplenty. However, given that it’s the high season and the campsite promised to be packed with people, we decided to head further up for about 40 minutes to reach the smaller but much more peaceful Tinkaran Campsite 2 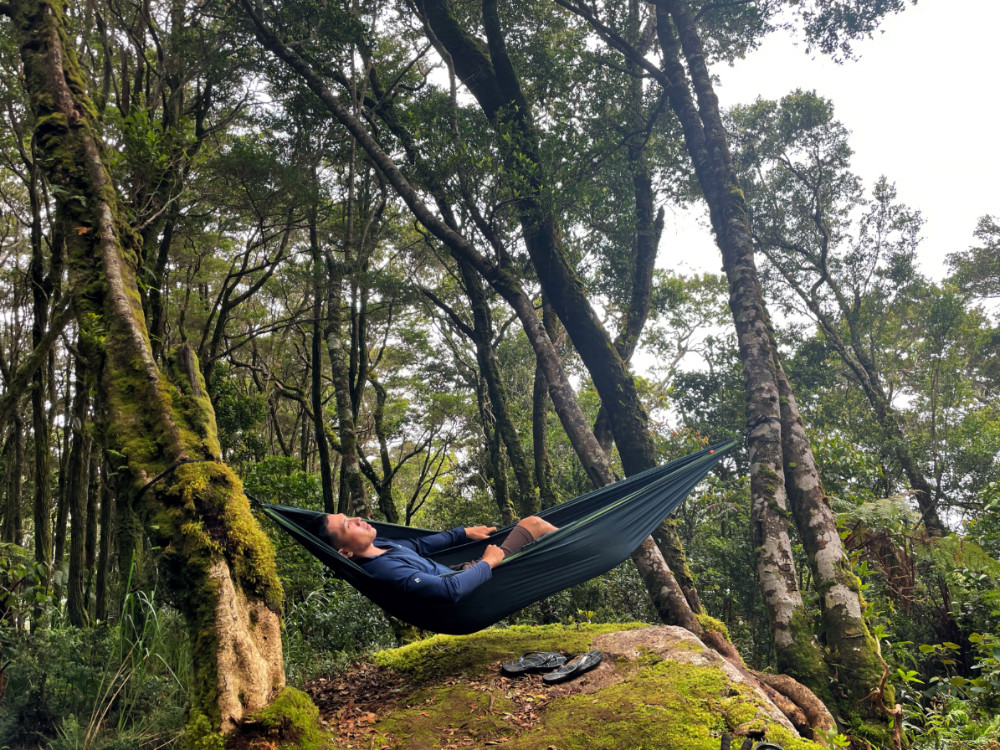 Our decision ultimately proved wise as we had the campsite to ourselves. Since we were already there by 1330H, we had plenty of time to relax and prepare for the early start the following day. 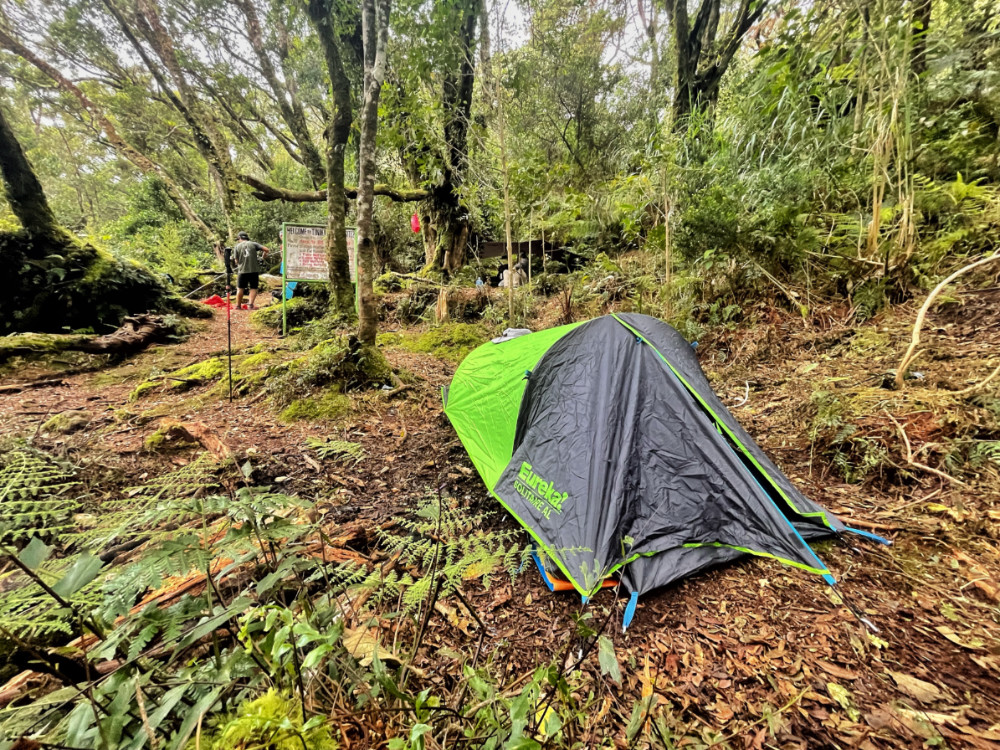 The next day, after quick coffee at 0200H, we began our hike up the summit. The forest line was just 10-15 minutes farther from the campsite and soon we were in the Boulders. Thankfully our guide took us to a trail that allowed us to avoid the traffic and even connect to the Kapagatan trail as it emerges from Gudi-Gudi campsite. By 0526H we were already at one of the peaks that constitute Apo’s large summit area. 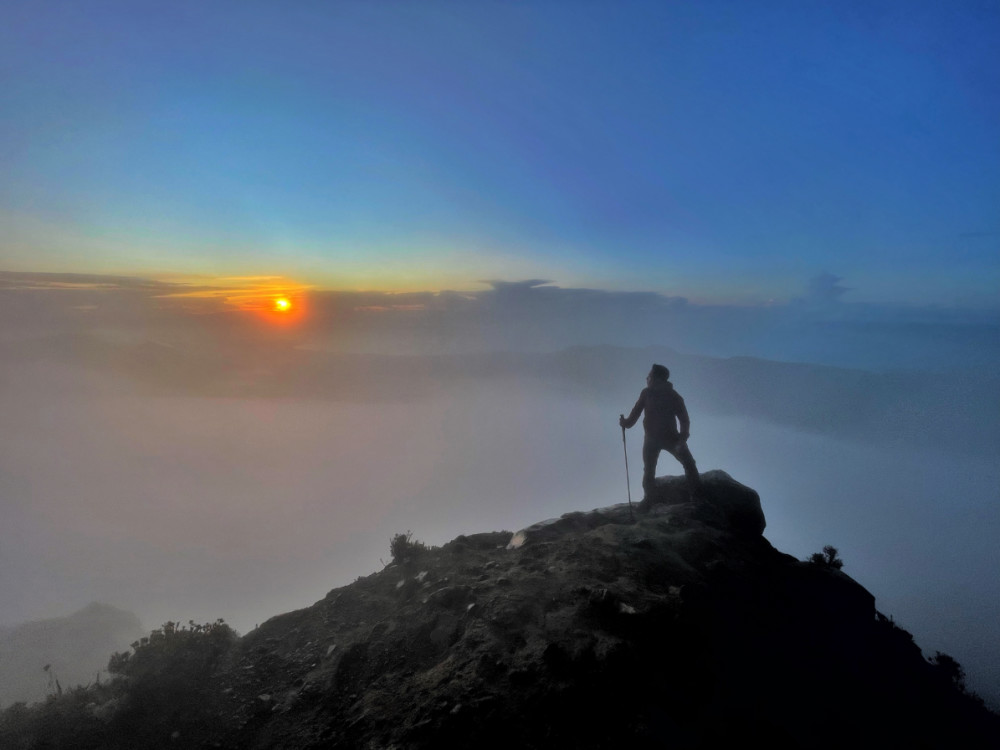 We explored other peaks including of course the central peak that is the true summit of Mt. Apo. There was an option to head down to Lake Venado to complete a ‘Sta. Cruz circuit’ but our guide advised against it given the high waters of Venado; I was also not too keen to push for it as I had limited time, and I had been to Venado thrice anyway. We visited the saddle campsite in the hope of seeing the recently-famous Philippine warty pig, but to no avail. 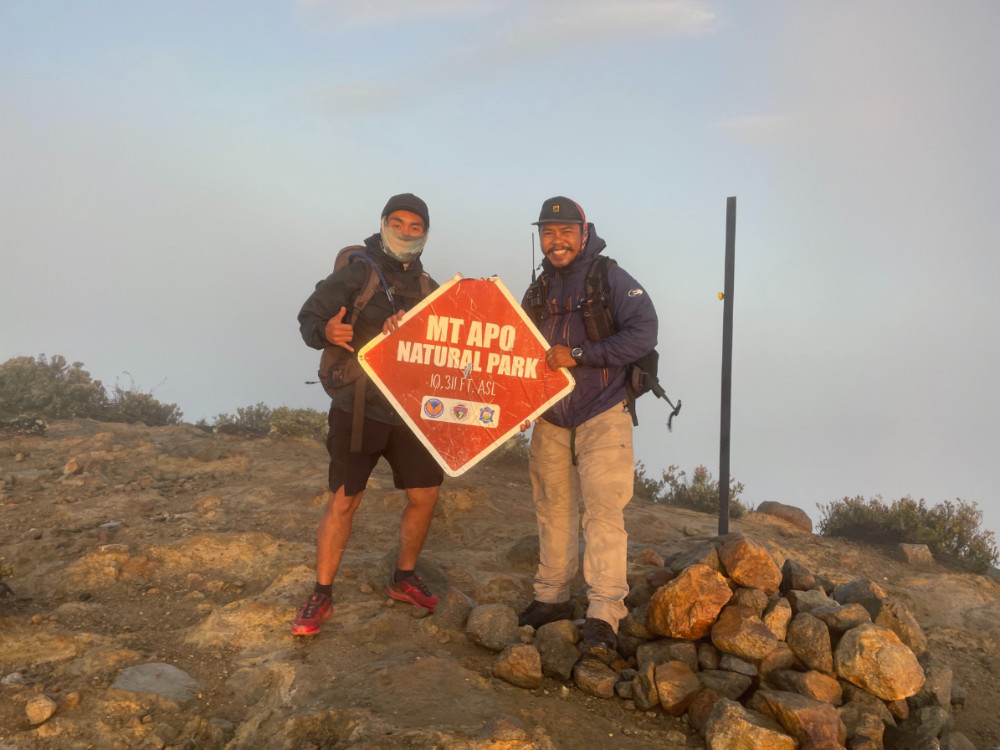 In any case, we descended via the Boulders anew, and this time, with the benefit of sunlight we were able to appreciate its sulphuric majesty; thankfully we had blue skies and no rain throughout the hike – except when we were already inside our tents the previous afternoon. The descent was straightforward; I think that the two day itinerary works very well for those comfortable with our tropical trails. 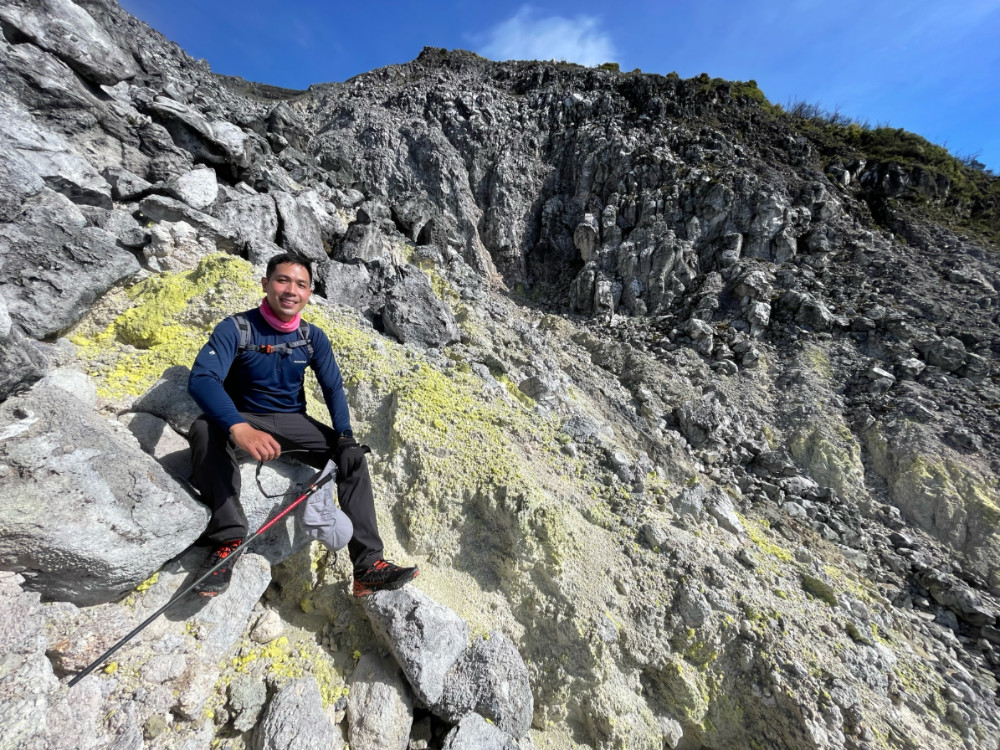 Thank you Sir Julius R. Paner of the Sta Cruz Tourism Office for assisting us, Clyde Gingco for guiding, and my good friends Jeshua Sales and Daryl Comagon for accompanying me! Email tourism.starcruz@gmail.com for reservations/permits and other inquiries!