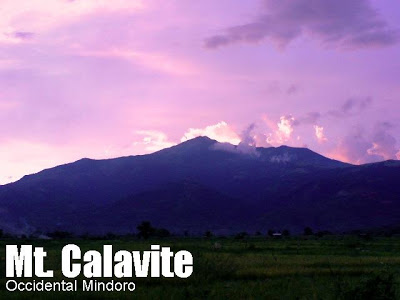 BACKGROUND
Perched at the northwestern edge of Occidental Mindoro, overlooking South China Sea, is Mt. Calavite. Known as one of the two remaining areas where tamaraw (Bubalus mindorensis) could be found in the wild (the other being Mts. Iglit-Baco), this mountain is a haven of biodiversity – one of the few places in the Philippines where hikers have a good chance of seeing animals such as wild boar, deer, and yes, even the tamaraw, roaming on its grassy slopes. The name ‘Calavite’ is said to mean ‘giant clam’ – and this is derived from an old Mangyan tale that tells of ships being seen at the mouth of Calavite.

The trek to Mt. Calavite usually starts at the Mangyan village called Sitio Ulasan in Brgy. Harrison, Paluan town. To reach this jump-off, you have to take a ro-ro vessel from Batangas Pier to Abra de Ilog, from which Paluan is still 2.5 hours away. The road is long and rough – with the views attesting to the pristine quality of the town. As you approach Paluan, Mt. Calavite would be a towering presence. At the town hall, one has to do a courtesy registration at the municipal hall, and a 30-minute trike ride will take you finally tot he jump-off. 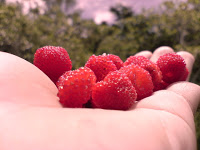 After passing by a few hundred meters of chestnut trees near the village, the trail becomes quite steep as the forested areas are entered. The altitude gain is astounding, around 300m/hour. An
intermission of level trails will take you again to a steep portion, but as you go higher, the forest thins out, giving way to a woodland with shrubs and wild strawberries (sampinit). Finally, beyond 700 MASL or about 2 hours of trekking, the grassland is reached. At this point, if you look to your back you can already see the town of Paluan as it faces South China Sea. From here until the summit, it is an open country – the grazing-place of horses, carabao, and occasional tamaraw. According to the Mangyans, the carabao are friends of the male tamaraw, who hangs out with his bovine cousins and even mates with the females! A place dubbed by the AMCI as ‘Sam’s viewdeck’ (745 MASL) is a major rest area – this is around 2.5 hours away from jumpoff. Another hour leads to the water source which is also the basecamp for doing the summit assault. 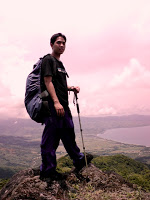 The assault requires 1.5 hours if one wishes to reach the very summit of Calavite, called ‘Tower’ because of an old transmitter still standing there. However, climbers usually just explore he summit area – choosing to assault the first peak instead (according to the Mangyans there are twelve peaks). The trail is grassy and steep, but the trek is pleasant. Sometimes the trail would disappear but just have to follow the peak, walking through the grass. Near the end of the trek, the grass abruptly turns over to bamboo-like shrubs, which populate the far side of the mountain.

At the summit area (1400~1521 MASL), the views become a full 360-degree panorama, opening up Batangas (NNE) particularly Calatagan; Maricaban island (ENE), the high peaks of Oriental Mindoro including Mt. Halcon on a very clear day (E), the mountains of Occidental Mindoro including those near Mamburao (SSE). The entire west view is South China Sea, with, finally the Lubang islands WNW.

Hiking activity at Mt. Calavite virtually came to a halt in 2007, when insurgency-related conflicts were reported. However, as of May 2008, there is no armed presence in the mountain, and Calavite is now open to climbing again.

SPECIAL CONCERNS
Logistics. For permission and arrangements to climb Mt. Calavite, contact Sir Celso, the PASU, at +639215869271. Cellphone signal is present throughout the trail for Globe and for most parts for Smart.

From the port of Abra, you will be swarmed with people who will ask you where you’re headed. If you have not arranged for a jeepney or van rental and need to take the van to Paluan, ask for the vans to go to Paluan directly. Some will promote their van even though it passes Mamburao and therefore eats up an additional hour.

From Palauan, you have to rent a trike to the jumpoff which costs P150/trip (up to 5 persons). Ask for your tricycle driver’s cellphone number so you may text him to pick you up also. A reasonable fee for return trip including the visit to Calawagan is P250

TRIVIA
A small hill at Calavite is called ‘Suklay’ by the Mangyans; a giant millipede is said to have lived there, with a comb-like structure on its head.

The blogger daytripped Mt. Calavite on May 9, 2008 – this is another possible itinerary. With light packs, one can reach the summit in four hours and back in two hours. By 1700H we were already back the village, and we even managed to take a dip in Calawagan before taking the 2000 van trip and 0000 ferry trip back to Batangas City!

PinoyMountaineer thanks Kuya Celso, PASU of Mt. Calavite, and Kon. Demos Viaño of Paluan for accommodating the blogger on his climb in May 2008 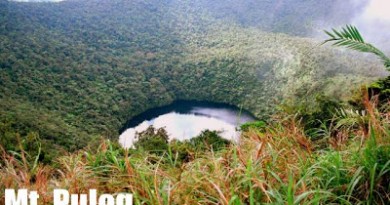 hi everyone and Sir Gideon, open po ba as of now ang Mt. Calavite? I tried to contact Sir Celso thru the number posted, kaso no reply po. Thanks 🙂

We will try this 2nd week of Dec to set our foot to this so called "forgotten" mountain…with the help of three local guides and two from DENR, we will establish the old trail of Calavite and hope to reach the summit. Wish us luck fellow boondokers…