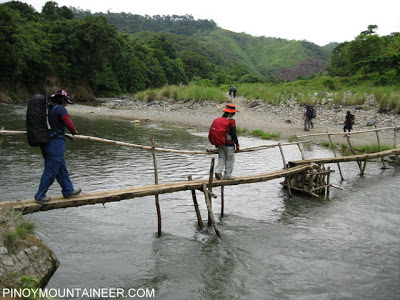 It was back to Adams for One Degree; this time to Mt. Linao! After having scaled Mt. Palemlem (Pico De Loro Norte) just the month before, we had originally planned to visit a different municipality but the lure of Adams – especially from the summit peaks of PDL proved too strong to resist. The choice of Mt. Linao (952 masl) was random and was primarily because we’ve heard from friends that if PDL was challenging, this mountain was more so.

We assembled at around 5 am in Laoag and after breakfast, took a chartered jeep again for the 3 hour ride to Adams. We’ve learned from the climb in PDL that it would be best to bring along an easy-to-munch lunch, to save on cooking and food prep time so that’s just what we did. On the way to Adams, one member of the group, who had climbed Mt. Linao years before with members of the Ilocos Norte’s Department of Public Safety, made passing quips about the climb that lay before us: that it took them 9 hours just to reach the summit and without load!

We reached the town plaza around 9am where we registered and met our guides, Beltran and Bartolome. People were mulling around us and wishing us good luck while some other guides who were there kept telling us to expect a much more difficult climb than PDL and while we heard what they were saying, we kept telling ourselves that it couldn’t be THAT bad. It had rained all day and all night the day before (a cause for worry) but the sun was shining in vengeful force and the morning rendered things in bright, clear detail that everyone was in high spirits, eager and almost bounding with excitement.

From the plaza, we walked for two hours on winding flatlands, across wide, hanging bridges and narrower, wooden foot bridges. We reached the small sitio of Masasabog which was incidentally where our guides were from. We ate our packed lunches here and rested for a while. We also refilled hydration packs and discarded extra water as we learned that Mt. Linao had a water source near the summit. Full and lighter in load, we thus started the ascent. 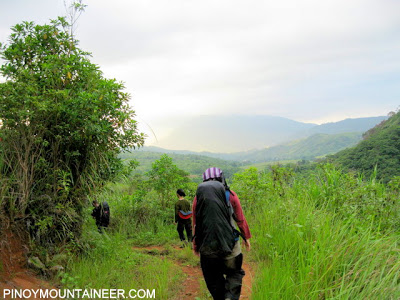 From the sitio, we hiked a short route across the Bolo river path, where we also saw the magnificent cascading waters of Kadisan Falls! Clambering up the river bed, we reached a very steep trail (almost 75 degrees) in wet towering cogon grass. Scrambling up the trail, our guides tell us that the ascent would be pretty much like that until we reached the tree line. We reached the trees after almost an hour of desperate, arduous climbing and while the slope softened a bit, altitude gain was still incredibly exhausting. What made the trail harder than PDL was that there was very little to hold on to for hoisting oneself up! It seemed we were climbing up for hours (3 hours in fact) when we decided to stop and rest in a small clearing which my daughters dubbed the “limatik clearing” because the limatiks were EVERYWHERE! It is here when Mang Beltran informs us that we had barely reached the midpoint and that we weren’t actually on Mt. Linao yet but on an adjacent mountain, Mt. Kadisan – which we had to traverse to get to Linao! The details were filtering slowly in and we regretted not doing our homework more conscientiously.

After a few hundred meters, the trail started descending – a welcome treat for our tired, aching calves – but the afternoon was turning out to be overcast and though it was just around 4 pm, dark was fast approaching. Our guides suggested we pitch camp by the stream (the first and only water source) at the foot of Mt. Kadisan and just do a summit assault before breakfast the following day. We heeded their advice and the thought of finally stopping for the day catapulted our weary party through the rough and tumbling trail towards our would-be camp site. The last leg of the trail, right above the flowing stream, was a sheer drop and we had to use anchored vines to negotiate our way down. By this time, my youngest daughter, the youngest in the group at twelve (but a veteran of Akiki), was already crying in exhaustion. 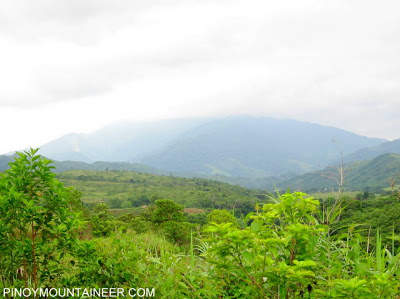 We reached the stream bed by 5:30 and our guides worked immediately to clear an area where we could set up our tents. There wasn’t much space but we managed to squeeze in the three tents we brought and still have room to cook and eat beside the flowing stream. The great thing about camping by a water source is the endless supply of clean, potable, rushing water to drink, cook and clean with. The downside is the increased presence of limatik. While the trail was already scattered with more limatik than we’ve seen in PDL, the campsite was a virtual feeding ground for them with us there! There was a point when we stopped plucking them off and just waited for them to fall, satiated with their fill (coming home, I counted 21 bites on my left leg and 14 on my right!).

Since the summit had a sunset view, we all decided to forego a sunrise assault and get some more sleep in before we had to climb again. We departed the campsite (without packs) at around 7 am and trekked through the boulders of the stream for a good hour. When we reached the foot of Mt. Linao, our guides had to bush whack the already disappearing trail. The ascent was as steep as expected but the time it took us to reach the top was unexpectedly surprising (just around an hour). Before we reached the summit, however, we had to go through thick, towering cogon grass and just right after clearing that, some members of the group accidentally knocked over an active beehive which had everyone scattering for safety! The excitement of that moment was quickly replaced by wonder and awe at the sight that awaited us at the summit – Lake Linao! The still waters surrounded by swampy marsh and edged with trees was a beautiful sight to behold. The presence of a flock of wild ducks that flew low and skimmed the lake’s surface only heightened the scene’s stirring effect on one’s soul. We sat there (on the summit campsite) for a few minutes, taking it all in. 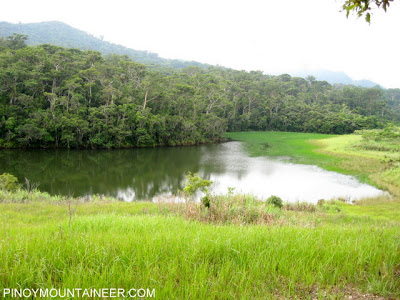 We headed back for our streamside camp where we ate breakfast (which also served as an early lunch since it was 10:00 am) and broke camp. Our guides, meanwhile, re-fastened vines on the trail going back, which we would be needing to literally pull ourselves out to start the trek home, which we did at around 11:30am.

The trudge back was not as exhausting as our climb up but we had a difficult time negotiating the cogon grasslands – quite a few in the group took nasty spells and tumbles while some simply gave up the fight and chose to clamber down sliding on their backsides! We reached the sitio five hours after we left camp and because we didn’t have any lunch on the way, we were all ravenously hungry. It was a good thing the sitio offered buko for sale! We couldn’t linger there, dark was only a few hours away and we still had 2 hours of walking to do to get back to the plaza.

We reached the plaza just as dusk set in and by a small sari-sari store where we rested and drank our fill of ice-cold Coke, Mr. Paul Acupan met us with a knowing smile on his face. He explained that he didn’t want to describe the climb in too much detail for fear of discouraging us, especially after our experience in Mt. Pico de Loro Norte, but he knew that we would find the demanding and strenuous climb worth it when we saw the lake. He also chose the best guides he had to make sure we were safe. Also there with Mr. Paul was the wife’s mayor, Dr. Biel Bawingan, who congratulated us after our ordeal and invited us back again since Adams has still much to offer the intrepid mountaineer. We reassured her that they would definitely be seeing more of us in the near future. 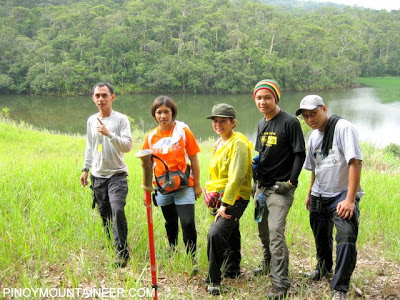 [The One Degree Mountaineering Group was formed last year and seeks to popularize, professionalize and promote mountaineering as a sport and way of life in the province of Ilocos Norte and the rest of Northern Luzon. As our advocacy, we would like to promote environmental awareness, protection and preservation as we advance the development and growth of local eco-tourism. The ODMG members who participated in this climb are Archie Pinzon, Agnes Pinzon, Danielle Pinzon, Auriel Pinzon, Armi Mariano, Kaye Santella, Jay Gambalan and Louie Angangco. Special thanks should once again go to Mr. Paul Acupan of the Adams Municipal Hall for his invaluable assistance and guidance, as well as to Mr. Eric Bawingan, Adams’ Municipal Mayor and his wife, Dr. Biel for welcoming us once again!]

Hello Manong! We climbed the day after two consecutive days of heavy downpour thus the trail was very wet and in some parts, completely washed out. Baka during the summer, it wouldn't be so bad going down to the Kadisan riverside camp. Our recent experience in Solsona has given me a new found appreciation for rope…so I guess rope would always be important regardless of season. We're doing a recon climb up Mt. Burburan (Adams) and Mt. Sinimbulan (Nueva Era) from who's peak you can reportedly catch a glimpse of our ellusive Mt. Sicapoo. Interested po?

Hey Aggie, now that you guys have done the recon for the rest of us, how many metres is the drop to the Kadisan campsite? We usually carry rope if the trail so requires. (I will cross-reference it with Lester who has been up there as well).
/Cecil

Hello BPS. The peaks of Ilocos are, of course, open to everyone and we welcome all those who would like to venture with us into frontier mountaineering venues here. We've had the honor (and pleasure) of having Doc Gideon himself and Cecil Morella of AMCI with us just this mid June. We can also help set up an Ilocos climb for your group if you like. You can keep tabs of our upcoming climbs at our multiply account http://onedegreemg.multiply.com or email us at onedegreemg@ymail.com or onedegreemg@gmail.com

Hi Agnes and the rest of the One Degree Mountaineers,

Are you open to “sabit” climbers? I am interested to join you, in case you are allowing outsiders to join you please do inform us of your upcoming endeavors. Where can we contact you? Thanks.