The power of the Internet as a means to share and get information has a great impact for hobbies and interests that would otherwise have no other means of sharing, being too small for mass media. For mountaineering, we have seen this in the past decade. As an early teen, I would always access Long Henson’s itineraries in the MMS website — checking out those mountains which at that time seemed unreachable. When PinoyMountaineer was launched in 2007, it followed the same tradition – this time, as Long Henson himself told me, harnessing the advances in cyberspaces such as the ability of readers to comment and thereby transform a unilateral itinerary into a shared endeavor to which everybody can contribute.

Yet the diversity of information – coming from separate perspectives – is an even better state that we are hoping for. Blogs focusing on regions — such as Mindanao, the Visayas, the Cordilleras, etc – would have the unique ability to furnish a more in-depth and updated picture when describing mountains and detailing itineraries.

The epitome of a regional mountaineering blog — but of course its blogger also has posts and guides about other places – is MikeB’s website, Mikeb: Welcome to Mountaineering Experience. Based in Zambales and a member of the YABAG Mountaineering Club, he has detailed information about the mountains in the province such as Cinco Picos, Balingkilat, Tapulao, Anawangin. And aside from these usual climbs, he has described other treks in the province. Some information from PinoyMountaineer’s own entries about these mountains, are doubtless derived from his infos, or from his hiking club.

We commend MikeB for his wonderful and informative site and encourage other mountaineers to form blogs from their respective regions/provinces. Check out his site if you are planning to any of those Zambales mountains. Starting this year, whenever available, regional blogs will be featured in the regional pages in PinoyMountaineer. 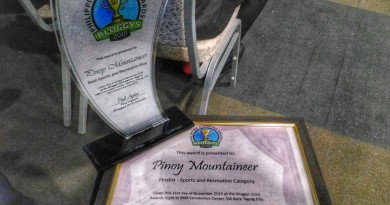 PROUD TO BE MMS 🙂