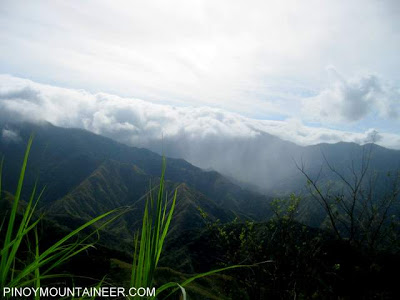 We’ve seen this peak from our two previous treks along the Solsona ranges and it has always seemed to beckon us to explore its mist covered slopes. Mt. Kilang (Kilung in Google Earth) sits on the north eastern boundary of Ilocos Norte and Apayao. At 1656 masl, Mt. Kilang is intriguing to behold. It has an expansive foothill base that stretches almost parallel to the boundary; which is where a new national hi-way is currently being constructed that will connect the province to Apayao, Cagayan and beyond. Atop this massive skirt is Mt. Kilang’s peak, round and full, like a giant ice cream scoop – which interestingly enough, even has a portion almost neatly wedged off (like some Herculean god of long ago took a spoonful taste of it!).

From the Solsona poblacion, it was an hour and a half jeep ride along not too rough roads, portions of which were being graded and compacted by heavy equipment in preparation for the hi-way. Jump-off was at a point where the jeep could only reach and we trekked the remaining 4 kilometers of gravel road up leg punishing inclines under the torturous heat of the mid morning sun. The road completely vanishes into a well established foot trail which according to our guides, continues on to Apayao and which is frequently used by travelers traversing the hills to and from the two provinces. The winds had a hint of chill and with the straightforward trek and magnificent views of the mountain range, we were all pleasantly reminded of the Ambangeg trail of Mt. Pulag. 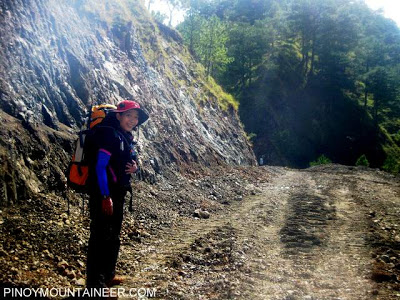 After three hours of trekking, we reach the foot of the mountain and stopped for lunch. The mountain loomed above us, mysteriously shrouded in fog and heavy cloud. We reached an open area after another hour – a water source and rest place for weary travelers. Much to our dismay, the place was heavily littered with trash and other human debris. We pushed on up the mountain, to higher ground despite an already heavy drizzle and, curiously enough, a sharp decrease in temperature.

We reach the campsite soon enough and it proved to be a good choice. It was flat, dry and spacious but more comfortably, it shielded us from the gusty winds that were blowing strong from every direction. We wanted to just drop our packs and push for the summit immediately but our guides dissuaded us, pointing out that the thick fog and strong winds might just get us lost. We find out that it was thick forest from that point to the peak and our elderly guides would need to hack a path through it to make a trail. We thus settled in for an early dinner and a good night’s sleep with everyone excited and in high spirits to make a bid for the summit the next day. 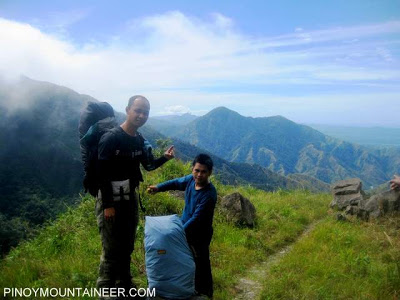 But sleep during the night was elusive, interrupted several times by very, very strong winds that seem to lift our tents and vigorously shake them. Then there was the bone-chilling cold that seeped in through sleeping bags and layers of clothing. The persistent rain drenched the campsite throughout the night and we awoke at 3 am, grateful to have to move around. The fog didn’t lift with sunrise; we barely even made out the sun’s fleeting rays. We thus only managed to start the assault a little before 7 am.

We entered the forest and started our way up the peak. As expected, it was slow going with the guides clearing the dense foliage. Halfway up we went through several cave formations that had amazing rock walls that were razor sharp to the touch. The wind and rain beat down heavily on us, we were sure that there was another storm. Nearing the summit, we reach a clearing from where we could see the hazy silhouette of our goal: a sharp rock point that jutted out into the misty sky. It was an awesome sight and we made haste to reach it. We have been trekking for nearly two hours and we were eager to get out of the rain. To reach the rock peak, however, we had to go through a deep cave-like ravine that led to a knife-edged ridge that left us exposed to the harsh, buffeting winds. To our right and down, jagged rocks lined the ledges that a fall would surely be fatal. To our left was very dense vegetation that covered a very large gaping hole (almost like a crater). Suddenly and unexplainably, the guides didn’t want to take a step further and were insistent that we stop right there. But we were so close, it was heartbreaking to consider not pushing on. So we carefully negotiated our way up the jagged rocks, pushing trek poles through the branches and ground cover we were stepping on, looking for firmer footholds. When we reached the rocky face, the trail narrows dangerously up to the tip which can hold only a person at a time. The boulders that held the rocky peak were loose and crumbling and we proceeded very carefully, deciding to climb up one after the other. First up was Louie, me and then Arch behind me followed by the rest of the party. The view from up there, looking down at the sheer drop, as I braced myself against the raging winds, perched precariously on loose boulders was indeed breathtakingly frightening. 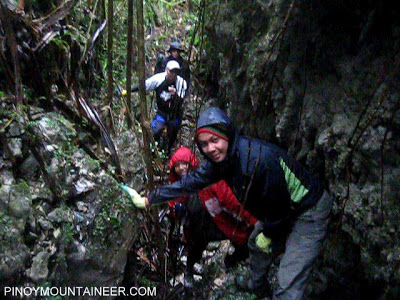 As we gingerly made our way down, a small boulder, the size of a hollow block comes loose and tumbles down the trail. We knew we had to get out of there quick before more rocks fell. Just as Louie, who was bringing up the rear, made his way down, one of the top most boulders (this time the size of two basketballs) breaks loose almost landing on top of him. He manages to catch and hold it in place with one of our guides behind him ready to yank him from under it. His left leg is twisted at an angle while his right foot rested dangerously very near the edge of the slowly crumbling ledge. He bravely calls out to all of us looking up at him to make our way out of the boulder’s path in case he couldn’t hold it anymore. While the rest of the team scampers to safety, Arch stays behind, fearful for Louie’s safety. Louie finally lets go of the boulder which tumbles down and stops a meter above Arch’s head, resting on other loosely protruding rocks. They hurriedly descend and join the rest of us back in the forest. There were pats on the back and near-tearful hugs that had everybody smiling nervously at each other, glad to be alive and together again. Lunch back at the campsite felt like Noche Buena!

After lunch, we struck camp and headed home but not before going back to the water source and resting area to do a little clean up. It was a lucky coincidence that while we were there two parties of travelers also arrived and saw us picking up and gathering trash – a sight that hopefully would leave a message to them and other wayfarers using the trail to clean up as they go and leave the mountainside as pristine as when they first walked it. 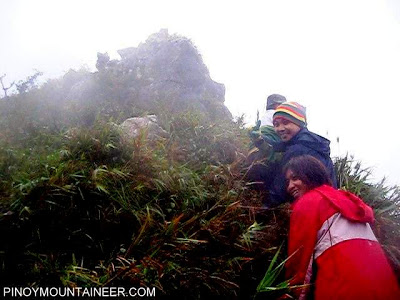 At the post climb huddle in Laoag, that night, the other members of the party share some very interesting things about Mt. Kilang as related to them by the guides – things they didn’t want to divulge while we were there on the mountaintop, emerging from the brink of what could have been a very bad experience. According to the two guides – Tata Emilio and Tata Gagay – Kilang (as local tradition would have it) means in Ilocano, “pagurnungan ti karurwa” which literally translates to “catch-basin of souls”. The crater-like basin that we found near the peak is (again according to the guides) the very trap which ensnares the unlucky one. The deep cave-like gorge we went through just before reaching the summit is like a gate into limbo. Locals never go up the mountain, terrified of its shadows.

Somehow this could explain the lingering fog, the persistent rain, the rattling winds and the cold that sent chills up our spines – even the blinding sunlight and clear, spotless blue skies that greeted us less than a hundred meters away from the mountain’s base. Enchanted or not, Mt. Kilang is still a worthy experience – with the right mix of local lore thrown in – which we’re sure to remember for years on end. 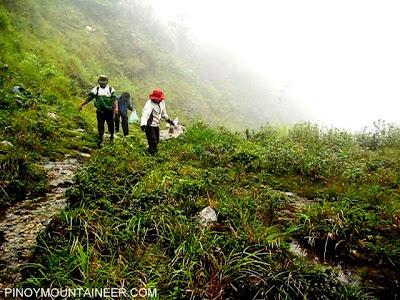 [The One Degree Mountaineering Group was formed last year and seeks to popularize, professionalize and promote mountaineering as a sport and way of life in the province of Ilocos Norte and the rest of Northern Luzon. As our advocacy, we would like to promote environmental awareness, protection and preservation as we advance the development and growth of local eco-tourism. The ODMG members who participated in this climb are Archie Pinzon, Agnes Pinzon, Willie dela Cruz, Jay Gambalan, Louie Angangco and Karen Santella.] 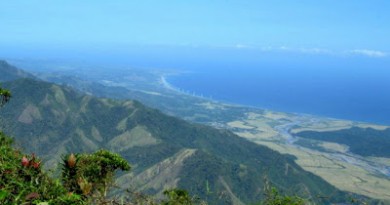 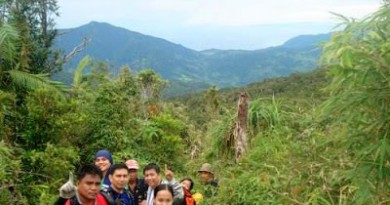 Invitation to Ilocos #7: Mt. Pao, another mighty peak of the North 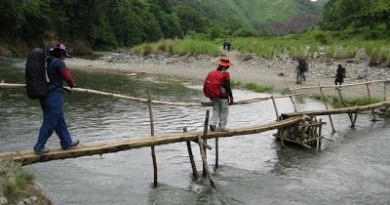 This place is not owned by the ilocos they are jusyt only claiming the land, its owned by the apayao province, and the people living in this place called sneg one of the ethnic group of the coldillerans region, and the mountain was named by the sneg people as mt. Kilang a long long time ago. If the ilocos want to develop the place as tourist spot they should incorporate it to the sneg people or to the province of apayao, because that mountain have already the big part in culture, traditions and life of the sneg people. And if you try to exploring the lives of the people in that mountain that would be much more wonderful than just visiting the place. 🙂 I am kelvin and i am an sneg too! Have a nice tour!!

This place is not owned by the ilocos they are jusyt only claiming the land, its owned by the apayao province, and the people living in this place called sneg one of the ethnic group of the coldillerans region, and the mountain was named by the sneg people as mt. Kilang a long long time ago. If the ilocos want to develop the place as tourist spot they should incorporate it to the sneg people or to the province of apayao, because that mountain have already the big part in culture, traditions and life of the sneg people. And if you try to exploring the lives of the people in that mountain that would be much more wonderful than just visiting the place. 🙂 I am kelvin and i am an sneg too! Have a nice tour!!

That's all we ask Gid… that you try. If you find that four day window, I promise we'll get you home in time 😀

@ shawicortez, thanks for your comment. Please visit our site at http://onedegreemg.multiply.com to keep track of our upcoming climbs. The exploration of the peaks of Ilocos Sur is something the group plans to do by next year. Hopefully, with as many climbers from there, like you, as we can invite! Hope to meet you soon!

it's so refreshing to read about your group! i am from ilocos (Bantay/Vigan) and i've always wondered why there aren't any climbs here despite the fact that we're surrounded with mountains!

i'd love to join future hikes. how do i keep track of you? pls keep me posted.