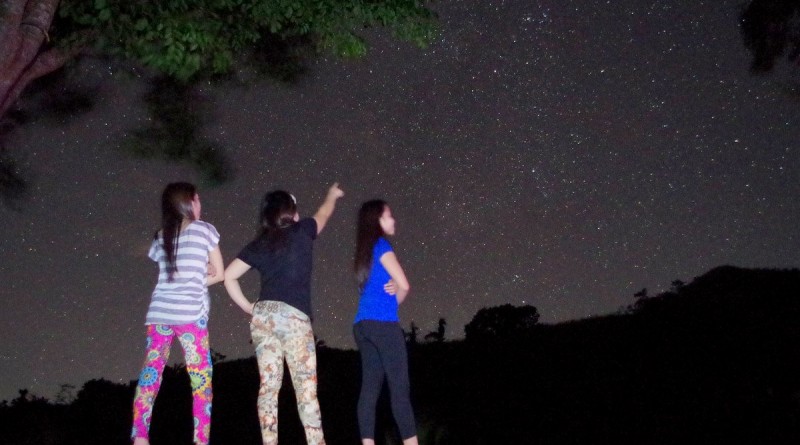 It’s become fashionable nowadays to speak of campsites as “five billion star hotels”, but how many of those stars can you actually identify?

Hikers, being exposed to unobstructed views of the night sky while camping or night-trekking, are natural stargazers, but how do we go about it, and learn more than Orion’s Belt and Big Dipper? In this exclusive interview with Mr. Pecier Decierdo, Education Committee Chair of the Philippine Astronomical Society, we get some answers:

Pinoy Mountaineer: Hikers have a lot of free time in the campsites at night. Would you recommend stargazing as an activity?

Mr. Pecier Decierdo: There are many reasons to strongly recommend stargazing for hikers. First, many hiking sites are far from centers of light pollution such as cities. Hiking sites are usually dark and afford a good view of the starry night sky. Second, hiking sites that have a high elevation have good astronomical seeing conditions because the atmosphere is usually thinner and drier up in the mountains.

Stargazing with fellow hikers is also fun because it is a communal story-telling experience.

PM: What are the first few steps in stargazing? How can a hiker get started?

PD: The first step in stargazing is, well, gazing at the stars. Telescopes and other fancy equipment are not necessary for a beginner; starry-eyed wonder is more than enough for a new stargazer.

The most important thing in stargazing is familiarity with the patterns of the night sky – the locations of the constellations, finding the brightest stars, identifying planets, understanding the motions of the sky in the span of a day and throughout a year. These require attentiveness to detail and recognizing patterns.

Knowledge is also more interesting and easy to retain if it is part of a skill. Hikers can be good stargazers by using the stars to navigate while hiking. The position of the stars can be used to help hikers identify their bearings and location. The stars can also be used to tell the time and season, because the stars move quite regularly throughout the night and are very seasonal.

A lot of hikers already use the brightest star in our sky – the Sun – to find their bearings while they hike. But it would help them to know that the Sun rarely rises due east and rarely sets due west. During summer, the Sun rises north of east and sets north of west; during the cold months the Sun rises south of east and sets south of west. This knowledge from stargazing will help increase the accuracy of a hiker’s orienteering.

PM: What time is ideal for stargazing?

PD: As hinted above, since the Sun is a star, using the Sun to navigate already counts as stargazing (well, at least not directly gazing, since that is a bad idea in the case of the Sun). But for nighttime stargazing, the ideal time would depend on the celestial body you want to see. The ideal time to spot any celestial body through a telescope or a pair of binoculars is when that body (star, planet, nebula, ect.) is high up above the sky and far from the horizon. Astronomers call this point of the sky the zenith.

If you want to observe objects less bright than the Moon, it is also ideal to do stargazing during the nights of the month far from the occurrence of full moon. This is why stargazers feel they are in luck when the peak of a meteor shower happens when the Moon is in its crescent phase. The crescent Moon is also wonderful to look at through the telescope – seriously way better than staring at a full moon through a telescope!

In general, past midnight is a good time to perform stargazing. It is when the sky is coolest and driest, and these are ideal conditions for stargazing. However, many beautiful conjunctions of planets happen early in the evening or early in the morning (just before sunrise). Conjunctions happen when objects, usually planets and the Moon, are next to each other in the sky. This usually happens close to the horizon, so it violates the rule of thumb I mentioned above about observing things when they are at their zenith.

In the end, since stargazing is strongly dependent on the weather, a stargazing hiker must enjoy every opportunity to bask in the beauty of the cosmos. This makes any clear night an ideal night to stargaze.

PM: What are the “best” months or seasons for stargazing?

PD: The best times to stargaze in the Philippines would be during the cold months and the summer months. Barring typhoons, November, December, January, and February are really great for astronomical observation. The dry months of summer – March, April, and May — are also excellent for viewing. This is fortunate since this coincides with the hiking season for many mountains.

PM: Are there special astronomical events to watch out for?

PD: The next soonest ones are the Leonid meteor shower happening this November. This year, the Leonids will peak at around November 17 – 18. The most beautiful meteor shower, the Geminids, promise to wow stargazers this December. The peak of this fantastic meteor shower will happen at around December 14 – 15. There’s also a beautiful conjunction of Venus, Mars, and Jupiter going on right now.

PM: Do you have events that hikers can join?

PD: The Philippine Astronomical Society is organizing a hiking and stargazing camp in Big Handy’s Grounds this December to observe the Geminid meteor shower. Big Handy’s Grounds is a beautiful camping ground in Tanay, Rizal. Everyone is invited! Check out the link here.

Please join the Philippine Astronomical Society on Facebook to learn more about their “star party” for the Geminids as well as their other star-filled events! 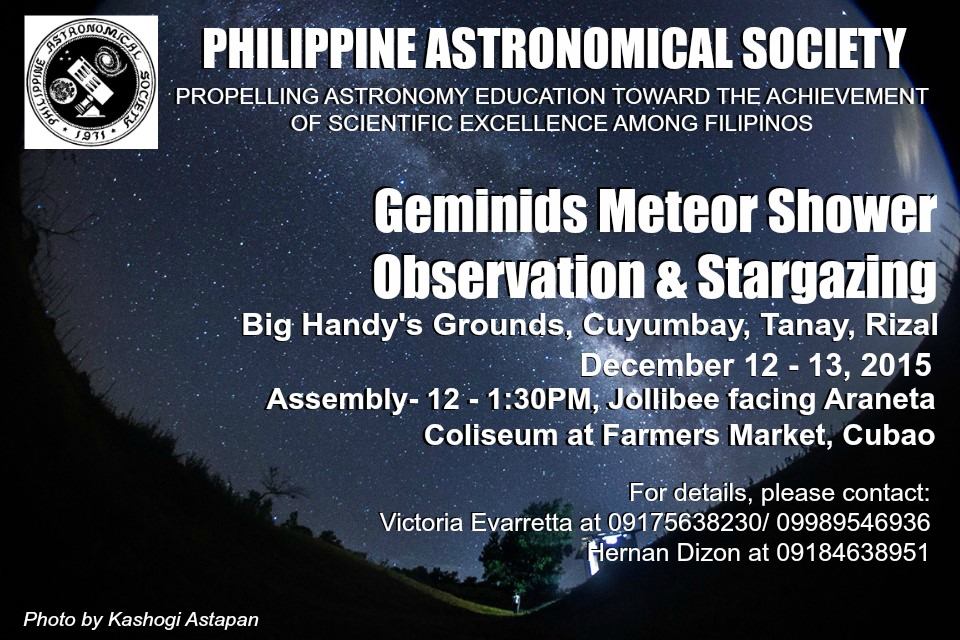