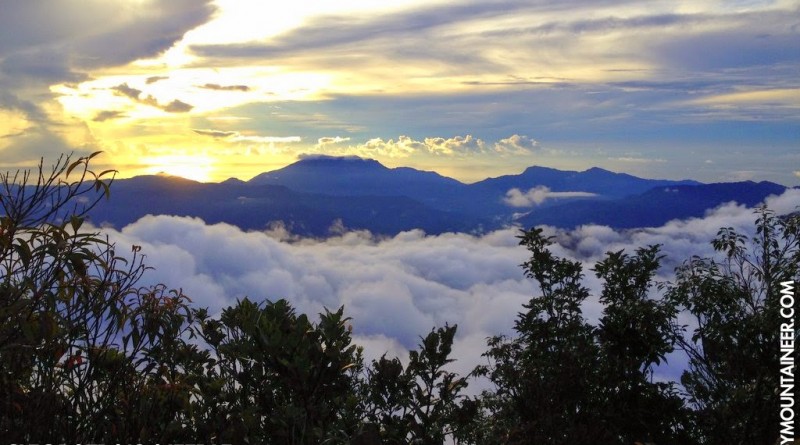 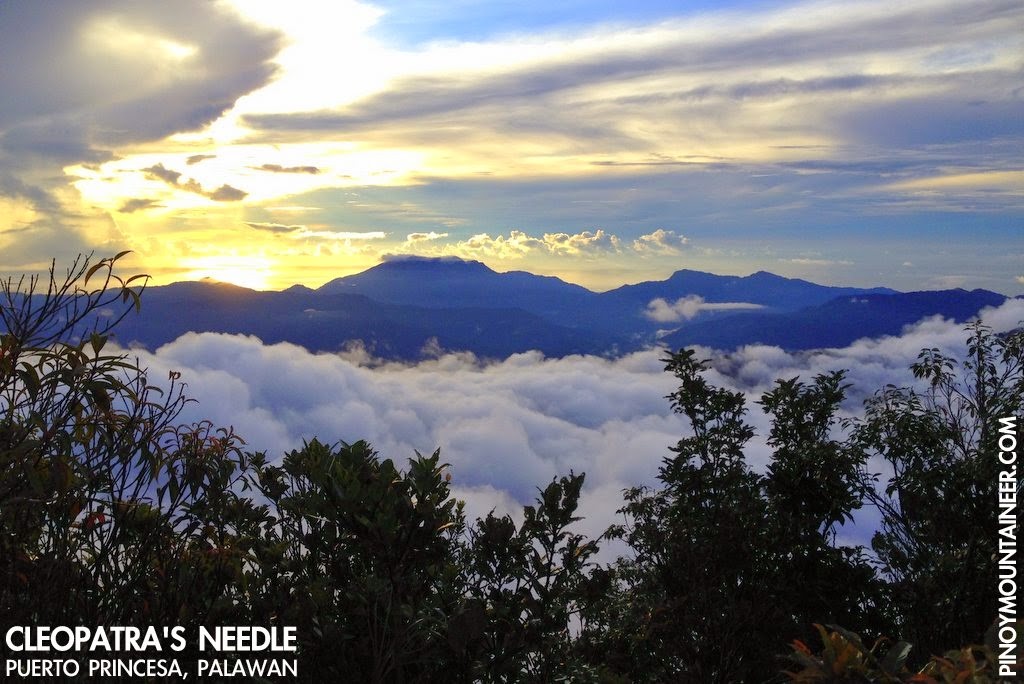 PUERTO PRINCESA – Continued from Hiking matters 420: From the Puyos campsite, we emerged from our hammocks and sleeping pads and proceeded to hike the final 100 meters to reach the summit of Cleopatra’s Needle, the highest point in Puerto Princesa and the third highest in Palawan. The short hike up was through beautiful mossy forest, home to pitcher plants (Nepenthes mira) and a wide array of fauna, some yet to be discovered and documented. 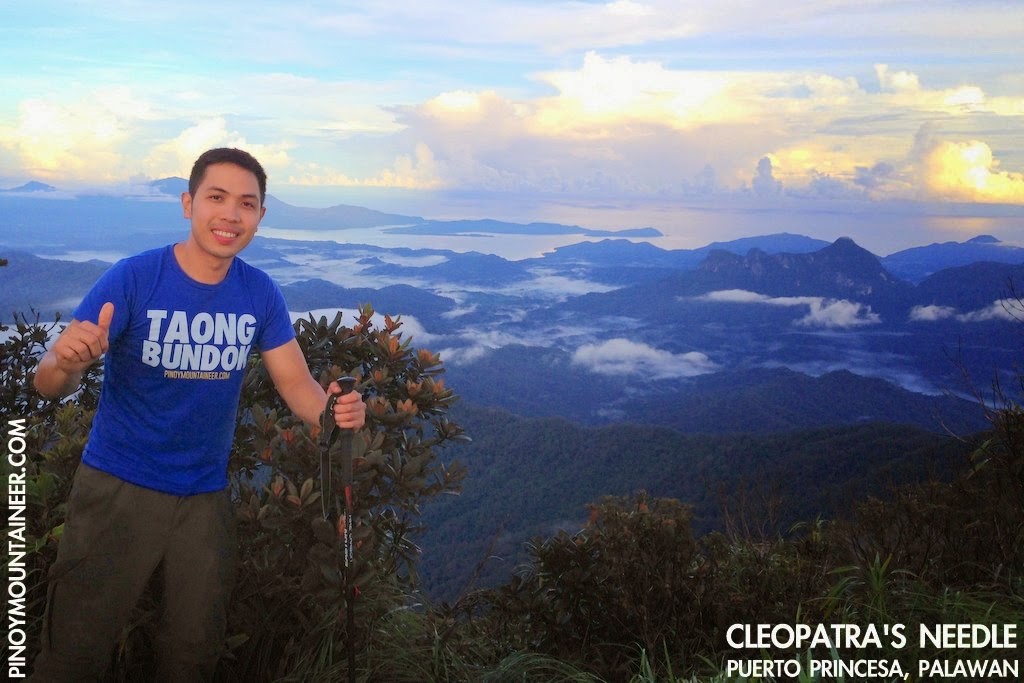 But it is the summit that is truly the crowning glory of the hike. The sun had just risen when we arrived, and its rays bathed Palawan with a faint but serene glow, illuminating mountains as far as Mt. Victoria and Sultan Peak in Nauru as well as a distant Mt. Capoas in Taytay, Rizal, its wide frame managing to escape being eclipsed by some of the auxiliary peaks of Cleopatra’s Needle. Its faint blue reminds me of Mayon as viewed from Isarog or Bulusan. 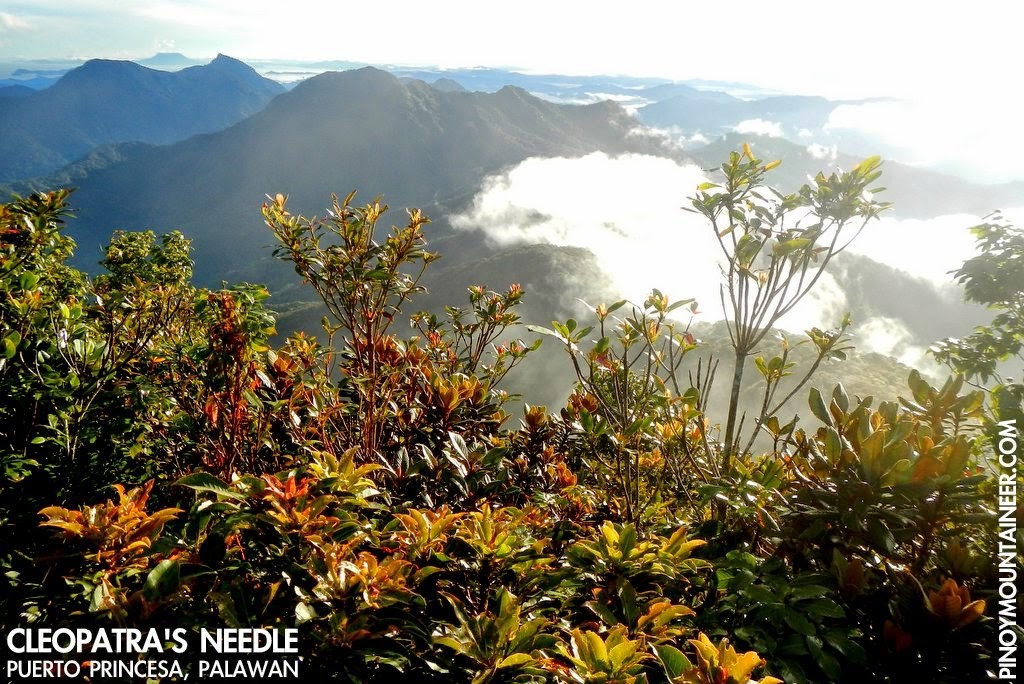 Here is a series of illustrated photos depicting all the mountains (and places) that you can see from Cleopatra’s Needle – covering over half of Palawan! 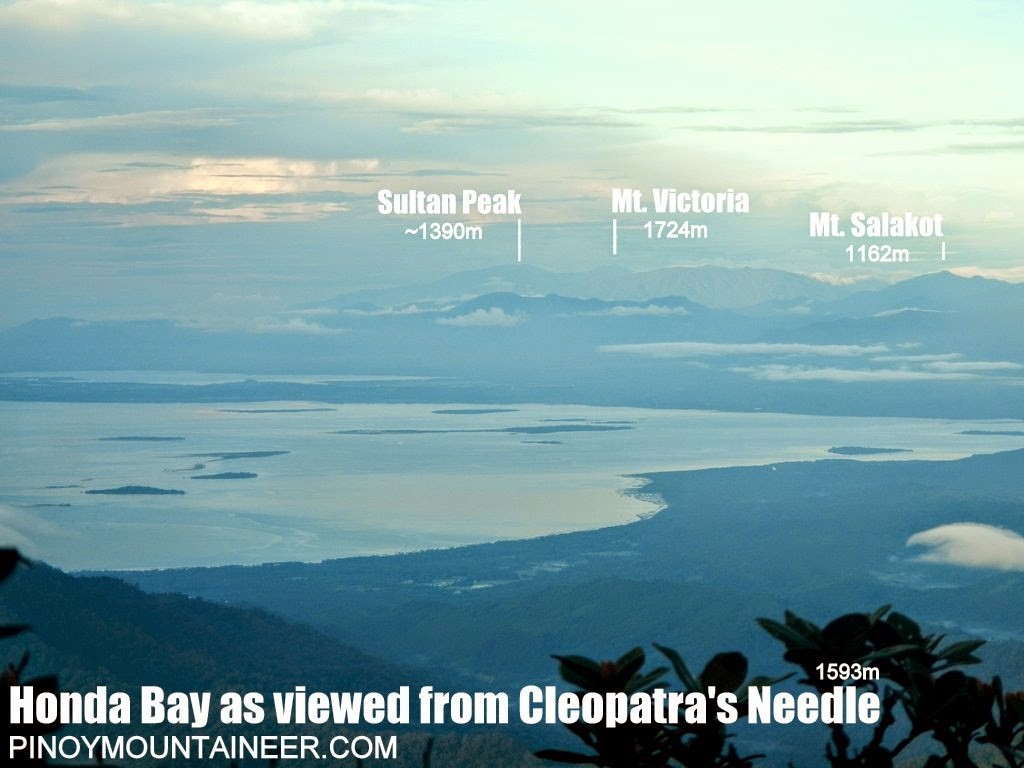 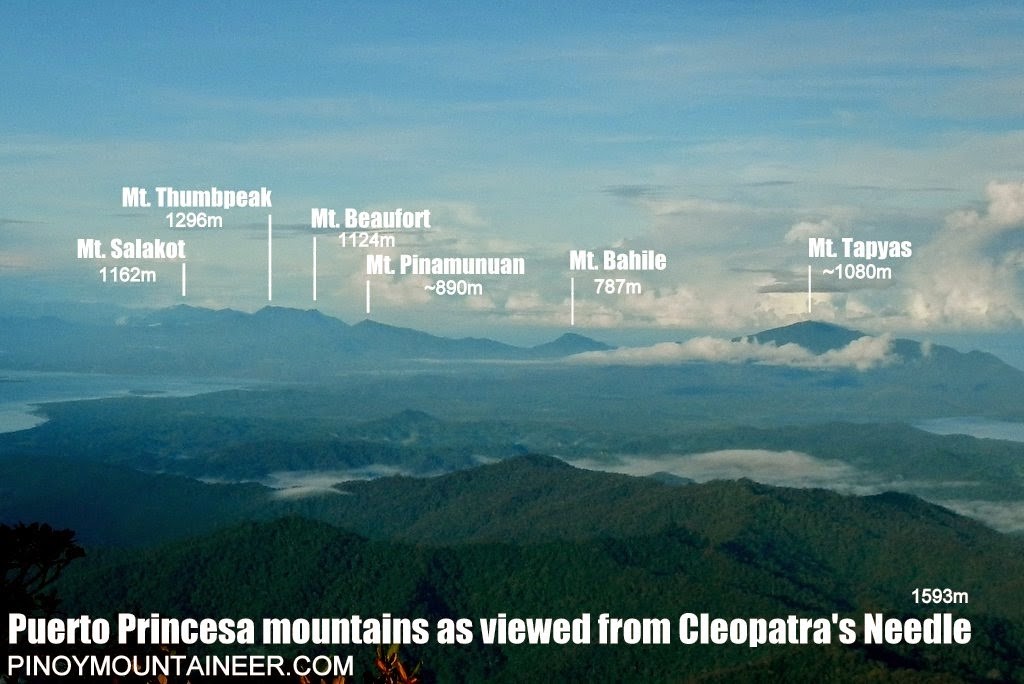 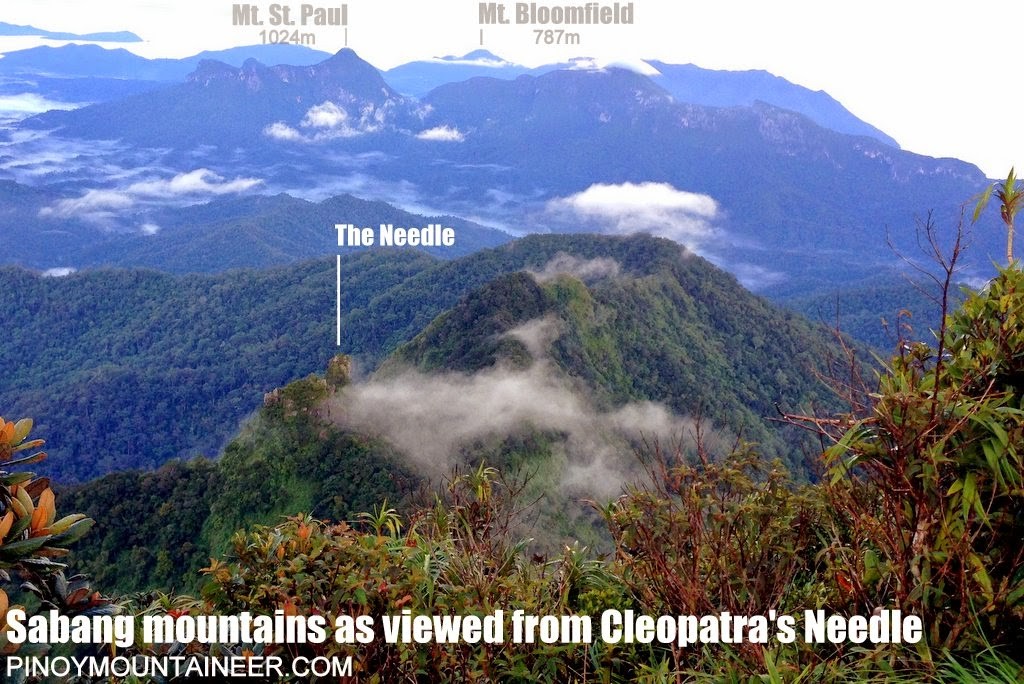 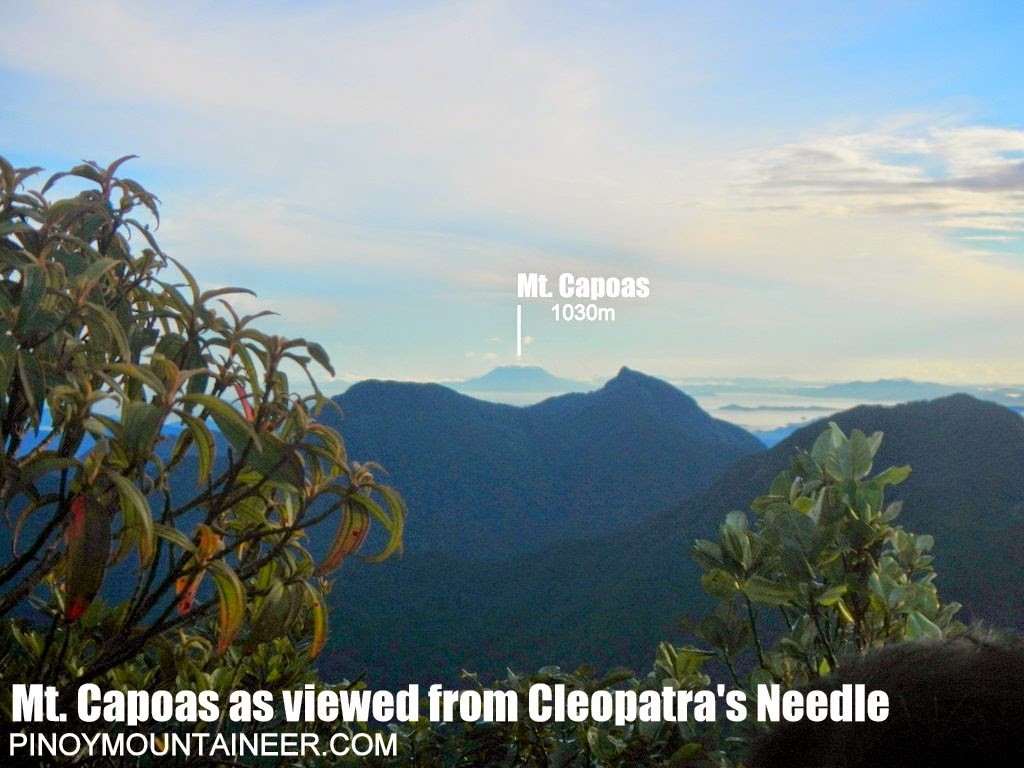 Both coastlines of Palawan can be seen in one view, which is really fantastic. In Mt. Bahile, one has to turn a bit to see the other side, but in Cleopatra, thanks to its lofty elevation, you can behold how slender Palawan island truly is. Honda Bay’s islands join Ulugan Bay and Sabang. If one needs further evidence of how pristine Palawan truly is, being at the summit of Cleopatra’s Needle on a clear day is definitive, and we could only stare at the views in wonder. 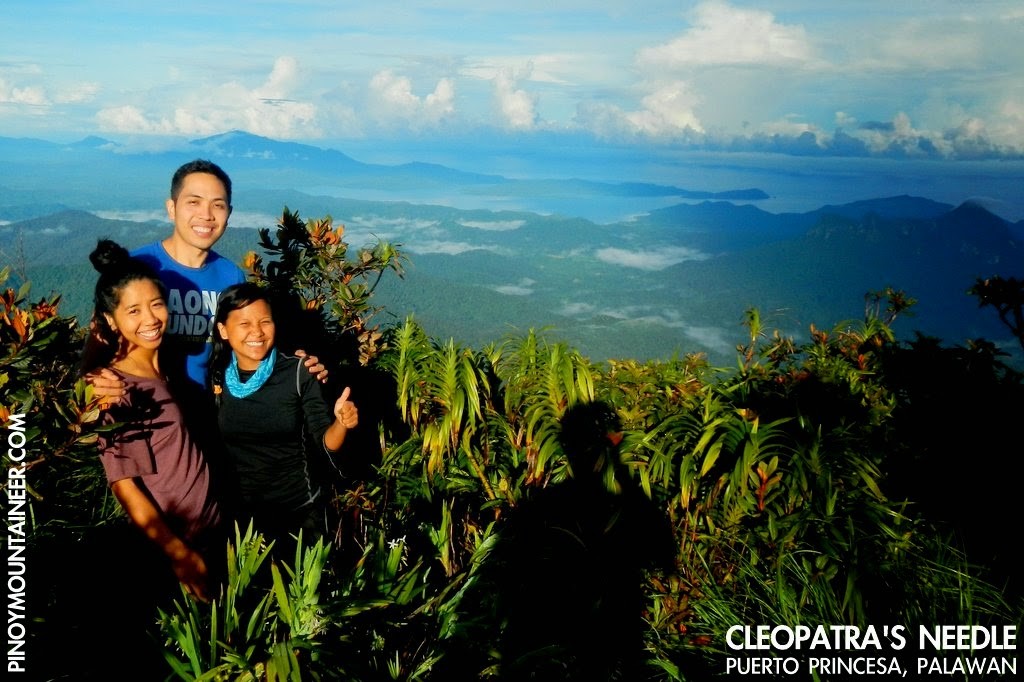 It was hard to move on – and we took the liberty of postponing our descent for over an hour, finally leaving Puyos campsite at 0920H. The initial descent reminded me very much of Mt. Makiling’s UPLB side when I was young – steep and muddy – but it went easier than we expected, probably because of improved weather conditions. The rest of the descent through the forest was brisk. 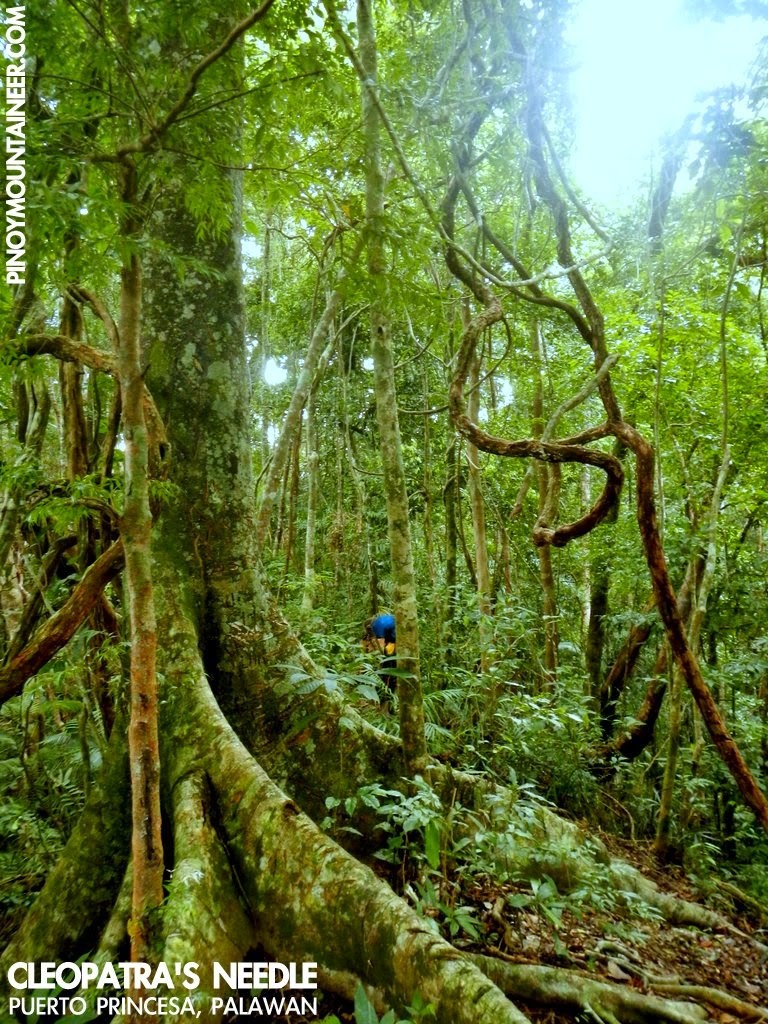 The day’s adventures,  however, were not yet finished. まだまだだね! We still had to do the 51 river crossings, and even though the rains had subsided, the waters were strong — not strong enough for us to postpone the crossing, but strong enough to require great care. Tatay Leonardo came up with a shortcut that saved us over 10 river crossings – which was a big relief to us – and after more walking through and along rivers, we reached the village by 1845H, amid the return of heavy rains. To be concluded in Hiking matters #422. 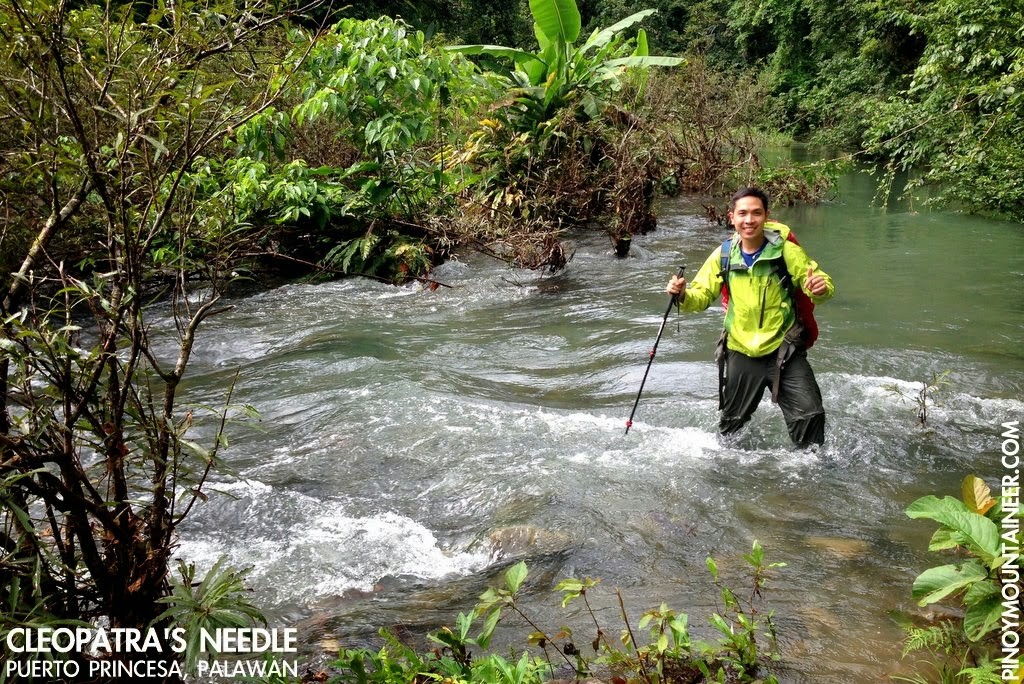 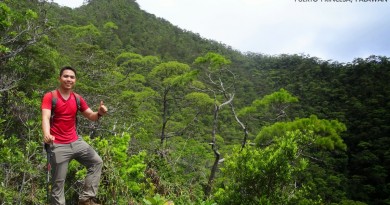