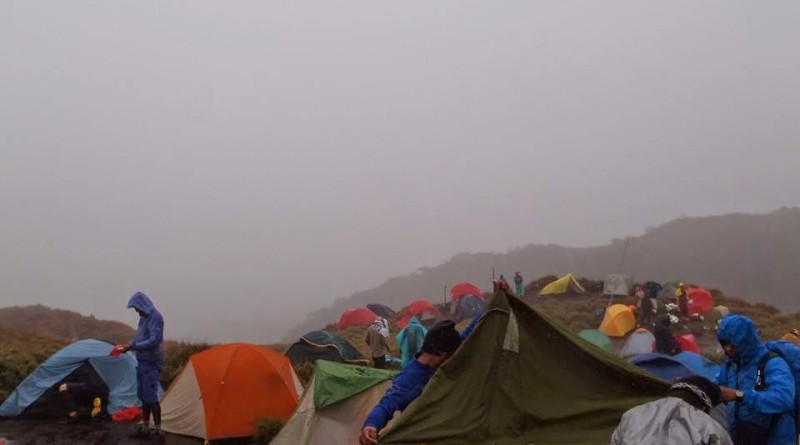 In response to the continued influx of visitors and amid growing concerns among mountaineers over the ecotourism in Mt. Pulag, the Mt. Pulag National Park has issued an advisory limiting the number of participants to 20 per group “to give chance to others climbers to trek the park”. This will not affect groups with previous reservations, but from now on, Park will not grant permits anymore to groups exceeding 20.
Moreover, the Park also announced suspensions for reservations on Saturdays beginning in 2017, giving priority to group of 10 and below. (Note: We will have to clarify what this means). Camping  in the Ambangeg Trail will continue to be disallowed from Friday to Sunday every week.
It further disclosed an increase on the entrance fee from P100 to P175/person, on top of the green fee and camping fee. In total, this would translate to P300 for hikers doing the standard Ambangeg route.
The announcement was made via the Park’s Facebook page.
The Park, led by Park Superintendent Emerita Albas, also warned organizers not to violate rules in a separate post:

Warning for the organizers who insisted in going to the Babadak Ranger Station last week despite the advise and refusal of the park management to let them enter the park. The park management will reveal your names if you will repeat such violation. Some have even gone to the extent of intimidating the park ranger on site and the guides. This warning also goes to the other team leaders who also went to the Babadak Ranger Station without passing through the Park Management Office.

We welcome these efforts to regulate ecotourism in Mt. Pulag, while at the same time recognising the value of ecotourism among locals who would otherwise resort to destructive farming practices. We call on organizers to respect these rules and not attempt to circumvent them, and we call on the national government to allocate more funds for Mt. Pulag considering that it is generating hundreds of thousands each month in gross revenue but is short of human resources and facilities.
For more of the environmental issues Mt. Pulag face today, see our Special Issue on Mt. Pulag and Ecoutourism.
Feedback welcome at news@pinoymountaineer.com