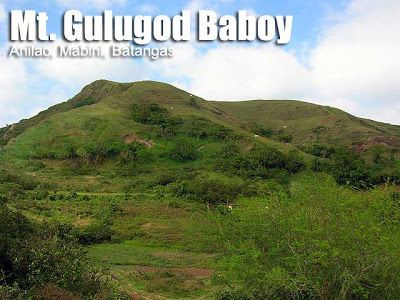 BACKGROUND
Gulugod-Baboy is the general term that describes the hills that traverse Calumpan Peninsula in Mabini, Batangas. Located in Southern Batangas, the peninsula is more known for the diving resorts of Anilao – the birthplace of Philippine scuba diving. Since dive enthusiasts are also enthusiasts for anything ‘outdoor’, they began exploring the hills, and soon, Gulugod Baboy became a hiking destination on its right, although today it remains a popular sidetrip to a diving escapade to Anilao, or to the nearby Sombrero or Maricaban islands.

There is confusion regarding where the real “Gulugod-Baboy” is. From SE to NW (from Brgy. San Teodoro to Brgy. Laurel), there are three peaks in the range. The first is 470 MASL, the second is 485 MASL, and the third is 525 MASL. This third has a large, ancient tree as its landmark, and is known to mountaineers as the real Gulugod Baboy. However, locals say that this third peak is actually Mt. Pinagbanderahan, and the first peak is the Gulugod Baboy. Fans of Long Henson, father of itineraries, would remember that he wrote about a Mt. Pinagbanderahan in Mabini, Quezon. This may actually refer to Mabini, Batangas, and is actually one and the same as the Gulugod-Baboy we know. Thus, there are three peaks, from SE to NW: Gulugod-Baboy, Gitna, and Pinagbanderahan.

Gulugod-Baboy is a playground for adventure: you can refer to the map and ascend/descend to any point in the peninsula using the compass. Most directions have trails; indeed there are many trails in the mountain which is both an advantage and a disadvantage. At its peaks, you can see, from east to west: Janao Bay, Maricaban strait which bears Sombrero and Maricaban islands, a distant, faint blue Mindoro, Verde Island (SW) and Batangas Bay. The city and port of Batangas is visible on the east, and behind and beside them, the mountains of Lobo, the nearest one being Mt. Pinamucan (E). To the northeast is Mt. Maculot, and even Mt. Batulao and the Tagaytay highlands (NW).

SPECIAL CONCERNS
Plan ahead if you’re going to do a traverse, or head back to Anilao and stay in the dive resorts there. Gulugod-Baboy is one hike trip in which private transportation is advised. As you trek through Gulugod-Baboy you will be passing by private property; make sure you observe proper courtesy. Also, there are dogs on the loose in some parts so be careful.

TRIVIA
Gulugod-Baboy means “pig’s spine”, so named because of the contours of the hills. “Gulod”, however, means hill; “pig’s hill” can also depict the pastoral scene of the mountain. You would normal encounter cows, goats, and in the past, pigs, as you trek through the mountain.

For its part, Pinagbanderahan has a historical background. It can be translated, “Where the flag was hoisted”, and it commemorates the crash landing of the Japanese in early 1942. In the heat of World War II, Japanese airmen had a mishap and crash landed in the slopes of Gulugod-Baboy. To celebrate their survival, they planted a flag in the summit. Since then, locals called it “Pinagbanderahan”. 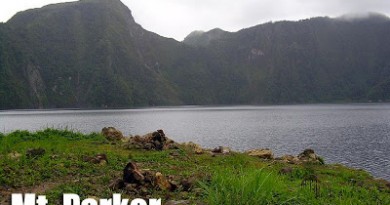 Hi po. We have scheduled climb po in Mt. Gulugod this coming May 10, Sunday. After climb we're planning to go on swimming sa philpan resort. What's the best jumpoff site we must take to descent in philpan. Thank you po sa help.

nakainggit kayo, nagkocompla kayo ng intense heat ng sun ibig sabihin clear day. When we ascend 4pm just last Sat we encountered the fog when we reached the third hut and it did not gave us a clear spot at all up to the summit. Pitching tent while "raining". In the morning it was still fog but it thickened 9am to 1pm up to the 2nd hutproviding halo halo going down.

May issue pa po ba sa registration dito? Or any other problem? Thanks