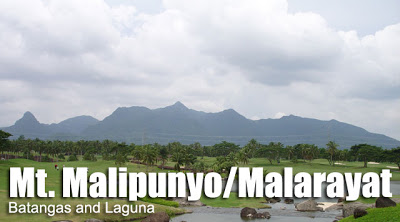 BACKGROUND
This mountain range, which is also known as Mt. Malarayat, is one of the major features of the Southern Tagalog landscape, which also includes Mt. Makiling, the Mt. Banahaw complex, and Mt. Maculot. It is also sometimes spelled as Malipuño. This mountain is cool, forested, and verdant for the most part, even the summit. Other areas are grassy, like those near Manabu Peak. 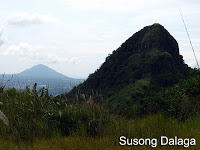 Its vastness gives rise to three destinations: the highest peak of Mt. Malipunyo; Mt. Susong-Dalaga; and Manabu Peak. These three are interconnected, although a separate itinerary exists for 2-hr trek to Manabu Peak. The customary trip is a traverse from Brgy. Talisay in Lipa City to Brgy. Atisan in San Pablo City. This trip entails a 3-4 hour climb, passing by woodlands and forested areas. A water source will be encountered an hour up, beyond which some parts would be steep, but with plenty of small trees to hold on to. The 4-5 hour descent north to San Pablo City involves the same trail for the first half; it will then branch off to San Pablo after a grassy area.

Malipunyo actually has three peaks with almost identical elevations, with the summit (Peak 3) rising to 1005 MASL. In April 2008, the summit has been cleared of trees to become a viewdeck. An plaster statue of the crucifix has also been erected. In this viewdeck, and elsewhere in the summit, one can see Mt. Maculot, Taal Lake, Mt. Atimla, Mt. Kalisungan, the Banahaw complex, and Mt. Makiling. The two other peaks — Susong Dalaga and Manabu Peak — are also visible.

Don’t expect the views to be spectacular, though. Basically, the attraction of Malipunyo is its forests. Though not grand like that of Makiling, it has a rural feel. Fruits such as sintunis (a form of citrus) and sampinit (wild strawberry) grow in the slopes of this mountain. Animals such as wild boar, monkeys, and iguana are also claimed by the locals to be present in the mountain.
and camping at the summit affords cool breezes. 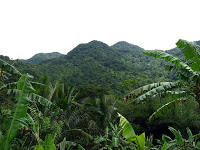 The usual staging-off point is Lipa. This city has become a major commercial center in Region IV; it has three malls and is readily accessible by the STAR Tollway. Buses regularly pass by Lipa on the way to Batangas City and other destinations in Batangas. From Lipa, tricycles can take you to Brgy. Talisay for Mt. Malipunyo (or Brgy. Sta. Cruz, Sto. Tomas) for Manabu Peak.

Transportation. From Manila, you can take buses going to Lipa or Batangas City (~P100). As much as possible, try to drop off at Fiesta Mall or anywhere near, where tricycles may be paid between P50-80 for a trip to Brgy. Talisay. Tell the tricycle to take you to the barangay outpost.

Logistics. A guide may be arranged at the barangay outpost. Look for the barangay officials, who will ask you to register on a logbook. They will also arrange a guide for you. As of May 2008, P500/day is the fee although it is customary to give an extra. Cellphone signal is present throughout most of the trail.

Technical notes. Noxious plants, including the pruritogenic (itch-causing) lipa trees (for which the city was named) are present in this mountain; it is best to take this in consideration in clothing selection. Trails are interconnected and quite confusing so be vigilant.

Only one water source are available in the above-mentioned itinerary so prepare 3-4 liters from that point. An alternative is to climb the summit by a daytrip. This is possible if you leave Manila by 0500hr. If you are very early and your pace is very fast, you can even do the traverse in one day!

Traverse trails. If a group intends to visit all three peaks of the Malipunyo range in one trip, then a Malipunyo-Manabu traverse is the best choice, plus a Susong Dalaga sidetrip. Although interconnected, the trail to Susong Dalaga branches off from the trail to Malipunyo early on from Brgy. Talisay. Thus, the recommended schedule is an early arrival at Brgy. Talisay on Day 1, and climbing Susong Dalaga early in the morning (1-2 hours up; 3 hours total). And then, after lunch, the group can commence the four-hour climb to Malipunyo summit, camp there, and then descent the next day to Manabu. The exit point would be Brgy. Sta. Cruz in Sto. Tomas. The reason why a Manabu-Malipunyo traverse is less preferred is that the guides at Brgy. Talisay seem to be more familiar with the entire range, and they can take you to all three peaks in two days. Just prepare allowances. If a traverse to San Pablo is desired, then an additional day might be required.

TRIVIA
At least three mountains are called ‘Susong-Dalaga’; Jose Rizal called Mt. Tagapo in Talim Island as such; and another similarly-named mountain is found in Rizal. However, the shape of the Susong-Dalaga of Mt. Malipunyo is, in the author’s opinion, truer to its name.

Other trails, including one from Tanauan, may also be used but these are more challenging and less-established. There is also a trail to Tiaong, Quezon from the summit.

In the olden days, young men of Brgy. Talisay used to do the traverse to San Pablo for another reason — and perhaps equally adventurous: they would bring a guitar across the mountain, set off at dusk, and serenade the ladies of Brgy. Atisan in San Pablo! They would return on the same night. 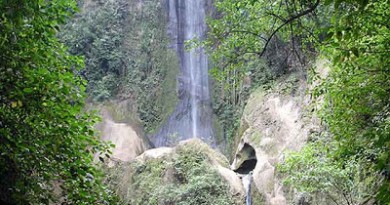 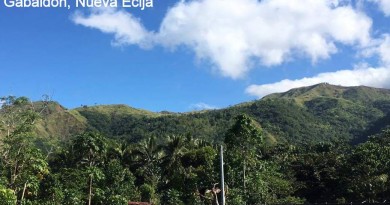 Kuya Mario is still guiding. We were there last Saturday-Sunday though our guide was Kuya Manuel. Kuya Mario guided a bigger group. Kuya Manual is a tanod there and was good in guiding us however he asked additional 200.00 to be given to the barangay according to him, that's on top of his guide fee which is 800.00 for a group of 4 people. =)

We did our 360 Malipunyo traverse to Manabu last weekend (May 3 & 4), I called it traverse 'cuz after 8 hours of trekking, we ended up on the same jump-off we've been through (kung saan kami nag halu-halo). We later found out from Kuya Mario the coolest guide of Malarayat na what we did is indeed a 360, yes, inikot namin yung Mt. Malipunyo dahil lang sa isang maling trail na nilikuan namin. We are a group of 5 people, our original itinerary was climb on our own until we reach the 4 peaks of Malipunyo (Peak 1, 2, 3 and Balete Peak), then sa Peak 3 kami magccamp, papalipas ng gabi then at 5am, susunduin kami ni Kuya Mario para i-guide kami on our traverse to Manabu, but the oroginal plan didn't took place. We start our trek at 11am, we are able to summit the 3 peaks, trekking ahead to Peak 3, dito na kami naligaw and we ended up sa isang puno na may "x" mark then an arrow pointed back, that was around 6pm na. We decided not to continue our trek anymore dahil dun sa place kung saan kami nag stop is meron pang 2 trail, much confusing. We called Kuya Mario for help and we found out na nasa nampucha trail pala kami, ang steep ng trail. He told us na konting lakad na lang daw eh andun na kami sa jump-off na pinanggalingan namin kung saan kami nag halu-halo. What we did is inikot daw namin yung bundok, 360. Dahil pagod na kami, we decided to look for flat surface place to set our camp, we ended up setting our tent sa isang medyo flat na land along the trail para makapagluto, makapagpahinga then ituloy nalang yung trek kinabukasan dahil pagod na talaga kami. Then Kuya Mario advised us na di raw kami pwede dun magtayo ng tent kasi daanan daw yun ng baboy damo at ahas pababa ng ilog/sapa, hintayin nya raw kami at maghahanap kami ng place na safe pagtayuan ng tent. Dumating si Kuya Mario sa kinaroroonan namin at around 8pm after a series of potpot like pandesal ni kuya mario at whistle namin para malaman nya yung lugar kung nasaan kami, after magdinner, we continue our trek up now with Kuya Mario, just after 15mins, may nakita kami na flat surface na kasya cguro mga 5 tents, we sat our tent there until the next morning. Meron din pala dun watersource, konting pababa lang dun sa may sapa, meron dun bukal na may saha ng saging na si Kuya Mario rin pala ang gumawa, ang sarap ng water dun, talbog yung mga bottled mineral water. At 8am, we continued our traverse to Manabu na kasama na namin si Kuya Mario. We have plans na bumalik this coming June para i-summit naman ang Mt. Susong-Dalaga, Peak 3 ng Malipunyo then traverse to Tiaong, Quezon. We did our traverse for a total of 17hrs trekking. An extreme experience for all of us, grabeng adventure. As for our guide, Kuya Mario is the coolest and smartest guide in Malarayat. Based on our experience, 100% ang possibility ng pagkaligaw dahil sa dami ng confusing trails, having a guide is a must…