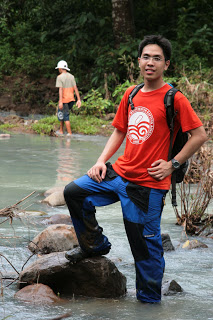 There is a joy in doing overnight climbs; you get to camp and sleep hundreds of meters above sea level; the air is fresh and the company is good. But when time is limited, there is such a thing as a daytrip — and most of the time I end up daytripping mountains that are actually supposed to be overnight climbs.

For instance Mt. Marami. I was joined by Julian and Jeboy, of the UP Med Outdoor Society, and we started out very early. But the way to Magallanes proved confusing, and just before the sun rose, we ended up in the middle of nowhere literally! We had to backtrack a bit before finally reaching the jumpoff at Brgy. Ramirez just before 8 AM. The locals were quite skeptical about our daytrip plan, saying that it’s usually a two-day affair.

I reasoned to myself that a daytrip can get faster not only because you’re motivated to complete it (there’s time pressure); but also because you have much lighter packs. How much time these factors gain, I don’t know.

We got two guides, a father-and-son duo. The trail was muddy, and we crossed several streams. I engaged our guides in conversation, and found out the names of the rivers: Ilog na Kayrayag and Bangkaan River. Beyond the rivers, we went up and passed by grassy parts. And then it rained big time! The ground turned muddy; the mists descended, and although there was still a trail to follow, it took some trial and error to keep going. Even the guides seemed unsure how to continue.

By lunchtime, we ended up on a small plateau and the guides said the hikers only reach thus far. “This is it,” they proclaimed. But I was doubtful. How could it be the summit? There’s supposed to be forest and a rocky ascent. I did my homework after all. So I called a hiker-friend, Sai Sicad; I described our location, and he said we were still 45 minutes to an hour away.

The situation was dire as it was wet: while my two companions tried to protect their dSLR cameras from getting wet, the guides couldn’t find a way to the summit, blaming the clouds. Upon further questioning, they admitted that they’ve never been to the summit! To make things worse, time was running out, it was 1300 H and i set 1400 H as our absolute turn-back time. Never mind that I couldn’t see Silyang Bato or the rocky summit – but having gone thus far I want to reach the peak! Then, as if by signal, a cow appeared from nowhere. Shrouded by the fog, it gradually emerged. We were caught by surprise as it approached us. He looked at me and headed into my direction. And then, unexpectedly, it kissed me in the cheek! Julian luckily captured that moment, and while elation poured with the rain and we rushed to see the glorious shot, the cow had disappeared!

Deciding it was a good omen, I was doubly motivated to reach the peak. I told the guides that the trail ought to be lying around, somewhere, and sure enough a trail there was, and we followed it until we reached the Bamboo forest. Before our cut-off time of 1400H, we had arrived at the peak!

There weren’t any views but it was still a success! We took a few photos and then we immediately started descent. But just as we thought we could proceed to Tagaytay and celebrate, we were confronted by a raging river: Bangkaan River has swelled to the level of our chests.

Tentatively we crossed the river, going with the flow, counting on the rocks beneath to support us, and slowly but surely we crossed the last hurdle. My two dSLR-bearing friends must’ve been scared stiff at the prospect of their cameras being swept away by the waters!

Mt. Marami update: Registration is now done at the barangay hall of Brgy. Ramirez; sign in your names and pay a fee of P10. (courtesy of donny boy) 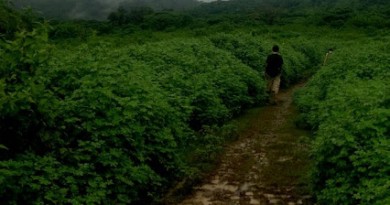 Dear sir & mam,
PIKNIKERS MOUNTAINEERS will be going to Kalinga Apayao on January 2009 to do a MEDICAL MISSION. The activity will be lead by Piknikers Members, Doctors, surgeons and Film Director Tarik. all members of piknikers. This will help the locals to have knowledge about first aid and life saving medicines. they will be also check about their health conditions and will be given free medicines and vitamins. the activity will take about 10 to 15 days. we will also share our music to them by the performance of the musicians SLUDGE FACTORY Band…..
in case you have anything to contribute like, medicine, old clothes or anything you think might help them. (no cash please) you can send it thru us.. you may contact us at email: piknikersmountaineers@yahoo.com.ph or leave a message in our friendster with the same email address.
thank you very much guys. promise we will also go to the unexplored mountains there and share the IT with you.

we climbed marami last may. it was the opposite of wet and muddy. it was parched!

the father-son guide you got may be the same father & son tandem we had as guides. They went down that night. We were on our own on the way back.

the heat of that trek could be compared to anawangin during day time.

about the cows, yeah, you were fortunate to only encounter one! there are at least 20 in that herd in Mt. marami campsite (where you had the picture). There are alot of trails (cow's trail). The cows did not bother us when we first arrived since we started late in the afternoon and arrived at camp 830PM. the following morning, when we were at the peak, we could see cows coming from nowhere, poking around our tents! good thing, we had a few companions who were back at camp and were transformed into cowboys.

we had a hard time preparing breakfast because of the curious visitors. but they own the place, we had to be patient.

on the way down, we got lost in one of the cow's trail, leading to their mud hole. had to walk back up, another 45minutes to catch up with the group.

the view's breath taking! somewhat almost similar with what you see from Pico de Loro, which can be seen. We were even thinking of the possibility of a traverse. Looks doable.

doing it in a day? good job sir gid!

we went mt. marami last february, we are only 7..we reach jump off point @ magallanes & we register @ brgy. hall costing 10php only and they asking if we already been there or get a guide, & we said we been there before but we all 1st time to climb it..we started ascent after 5 mins we saw 2 trail & luckily we saw local & asking for direction we said "basta 'wag kayo lalayo sa malaking trail", 7 we follwed as he said to us..we cross the kayrayag & bangkaan river..the river was dry we not actually river crossing..& we reach the señora dela paz & then we continue,.we see a hut & water source, the next trail are steep ascent to silyang bato & no establish trail, we took it 2 hrs but its dead end, so we decided to backtrack going to hut 'coz its been already dark, we feel disapointed not to camp @ basecamp, we camp @ hut "kapihan", we continue our trek the next day & we saw silyang bato far from us & then the rocky column of mt. marami we passed baboo forest leading to a steep rocky assult to te summit,the views are awesome & mt. pico de loro, the wind are strong but not that cold, we picture taking & decided to descent & we came @ jumpoff point safely & no worrid.I say that mt. marami is very cofusing many fork trail & forested..i suggest to all to get a guide that knows the trail going to summit, & hired a jeep going magallanes-ternate..tnx!..

Kodak Moment with the Cow! 🙂