BACKGROUND
If Pico de Loro were a blockbuster movie, its sequel would be Mt. Marami, set in the same location and sharing the same characteristics. Matching Pico de Loro’s rocky tower are two grand structures, surging up from the slopes: the summit of Mt. Marami, a massive, monumental composite of rocky pillars; and its guardian, the smaller Silyang Bato. The name ‘Marami’ is of local origin, and is attributed to the ‘many rocks’ that formed it. Subconsciously, this choice of name is profound, considering the sedimentary nature of the rocks found in Marami. Indeed, in recent geologic past, Mt. Marami below sea level. Silyang Bato, for its part, has a more modern etymology; according to the locals its original name is ‘Nagbuo’, and was christened with its present name by the earlier mountaineers.

The major jump-off to Mt. Marami is Brgy. Ramirez in Magallanes, Cavite. However, the summit and its environs are under the jurisdiction of Maragondon. It is a 3-hour drive from Manila; passing by the coastal road, onwards to Tanza, then Naic; from Naic a jeepney can take you to Magallanes. Brgy. Ramirez is just 10 minutes away from the town proper, and accessible by tricycle. Go to the barangay hall, where you can arrange for guides, or proceed to do the trek.

The trail begins smoothly; although it poses concerns for both wet and dry seasons. It is severely muddy when wet; whereas sun exposure is notoriously acute when dry. Even so, the views are rewarding. The first landmark is ‘Ilog na Kayrayag’, a nearby river; next is Bangkaan River, which you have to pass thrice. In both rivers, you have the wade your way — water is usually knee-deep though with heavy rains, they may swell to forbidding levels. The last river crossing is around 1.5 hr from starting point. A bamboo bridge was in place here, before it was wrecked in April 2007. 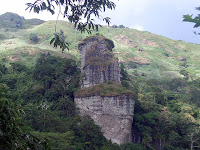 The ascent commences after Ilog Bangkaan; and here, there are two variants of the trail. One is the Nuestra Senora dela Paz variant, and the other is the Talahib variant. The former offers frontal views of both monuments (including a close-up of Silyang Bato), and is recommended over the Talahib, even as the latter has a more gradual ascent, and it is the one used by the locals. In both trails, the environment is comprised by woodlands and sections of grasslands.

THE NUESTRA SENORA TRAIL
This trail approaches Marami from the west. Thirty minutes into the Nuestra Senora, you’ll encounter a nipa hut, called ‘Kapihan’ by some. Nearby is the last water source. An hour into the trail is Campsite 1, which offers majestic views of Silyang Bato and Mt. Marami. After one more hour of trekking, the bamboo forest will be reached. After an hour, Campsite 2 appears, in the southern portion of Mataas na Gulod. From here, you will enter another forested part to reach the base of Marami, where a campsite, the one most often used, is located. A ten-minute assault of the summit ensues.

THE TALAHIB TRAIL
This trail approaches Marami from the south. It uses a “saddle peak” – the slopes of Mataas na Gulod peak on the south side – instead of approaching Mt. Marami directly. Hence the ascent is more gradual. Instead of following the river to Nuestra Senora, you go straight, and after 1.5 hours, you’ll encounter a nipa hut. Beyond this, you will see the two structures for the first time. The trails from here on are mostly ‘talahib’ grassland – the talahib can grow very tall and may obscure the trails. You may encounter grazing cows at this point. Then a campsite will be reached after over an hour, just below the ‘Mataas na Gulod’. Afterwards, you will approach Mt. Marami via the bamboo forest. The trails here can get very confusing. After the forest, a clear-cut path to Mt. Marami emerges; and just five minutes of bouldering will take you to the summit of Mt. Marami.

At the summit, rocks, patched with unusual mosses, lichens, and ferns, comprise the scene. Winds are strong and weather is cool. Dramatic views ensue, affording a panorama of the Maragondon mountains, including Pico de Loro, Mt. Mariveles, and even Mt. Banahaw. Dramatic rock formations, set in this beautiful background, create an infinite number of photo opportunities.

TRIVIA
Average trek time is 5 hours. Interestingly, the water in the rivers and streams are milky white. However, when the rivers swell, it becomes murky brown. This is also the time when locals would go to the banks and try to catch some fish.

Mataas na Gulod was a more prominent landmark before the “discovery” of Mt. Marami. Its elevation is probably around 300 MASL. Speaking of elevations, the circulating elevation of Mt. Marami at 840 MASL is a gross overestimate. It might probably be referring to feet instead of meters, as 280 MASL would be a valid estimate using satelite data. The 405 MASL used in this IT is from the author’s own measurement.

Many thanks to Sir Erick Bautista of OLAY Mountaineers for the pictures and the advice, When the author of this IT climbed Mt. Marami, the views were covered with fog. 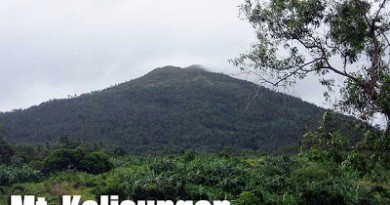