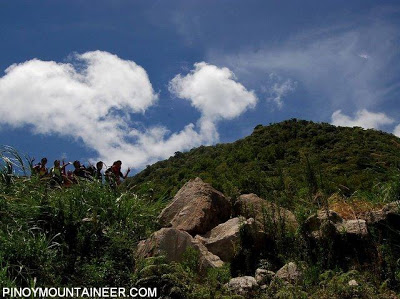 Few hours of sleep in Bacolod sufficed for our team, and we proceeded to Dumaguete in a rented jeepney. This ill-fated jeep, however, conked out in the middle of the trip, and at 4 in the morning, we were stranded in the highway, arguing with the drivers who refused to give a refund. We had agreed with the Cuernos de Negros guys to meet at 7 am, and being late would be a breach of agreement. Good thing Jimbo of CNMCI immediately understood our situation, and adjusted the itinerary so we carried on, taking the Ceres Liner to Dumaguete. Being a monopoly, tt is remarkable how some of these vehicles survive and are tolerated by the people who have come to know Ceres as the general term for ‘bus’! Our Ceres had no clutch and brakes, so it kept rolling along, ignoring the would-be passengers waiting for it to stop! 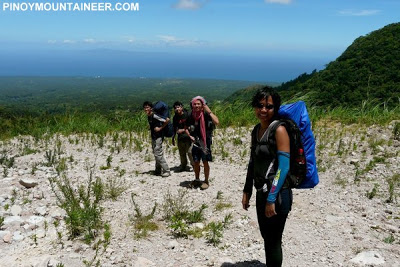 At any rate, we arrived before 10 AM, and lost no time proceeding to Dauin, the town where the Bediao route originates. Jimbo, the club president, and Botox, a club member, accompanied us; we took a habal-habal up Mt. Talinis. 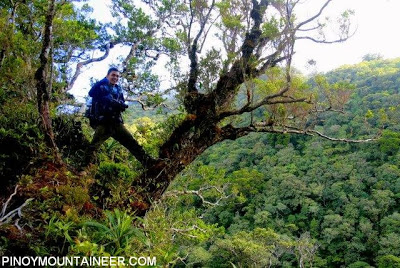 The initial trail was open and scorching hot. One could turn back to the sea and request for some coastal wind but to no avail. Instead, there was Siquijor, the Southern Edge of Cebu (hello, Osmena Peak!), and other islands. 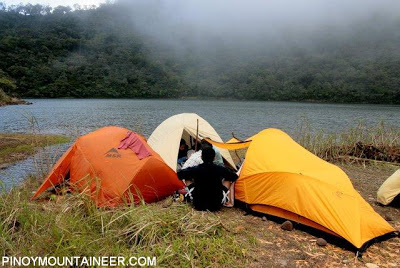 Lake Yagumyum was our first stop; it was nice though the waters were murky. We lost no time in proceeding up the trail to Lake Nailig, where we would camp out. The trail soon transitioned into a nice forest, until we were in a very majestic scene of gigantic maribuhok trees, whose branches you’d mistake as tree trunks. In fact, the whole ridge is scaffolded by these trees and will walk in the branches and roots, gleaning the ravines underneath. I think this is the highlight of the trail. 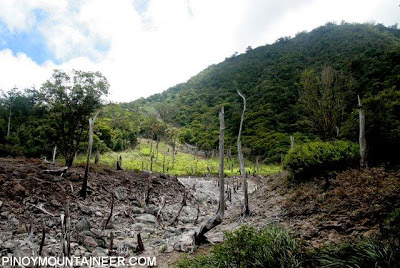 Then, finally, Lake Nailig. A very cold place visited by clouds and surrounded by mystic trees, we set up camp there, together with the CNMCI guys who have also encamped on the lakeshore. 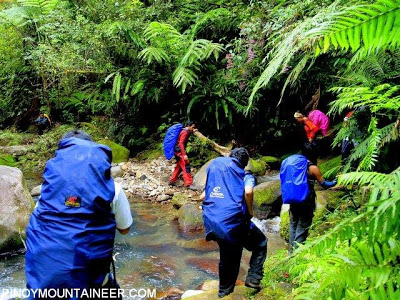 The next day, we skipped the optional ascent to the Talinis peak and instead rushed to make it to Casaroro Falls. I also took a quick dip in Lake Nailig: bugnaw gid! The trail via Apolong was again lengthy but it was easier and by early afternoon we were bathing by the waters of Casaroro Falls. The verdant array of Talinis makes parallel of Napulauan and Dulang-Dulang in terms of forest mysticality; the lakes add more. 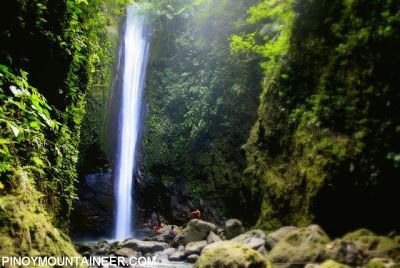 Roxie, a friend of Gideon’s, and her family hosted us in one of those nice restaurants in Dumaguete. Then we took the last trip from Dumauguete to spend another few hours of sleep in Bacolod. We would then crossover to Panay Island to climb the next mountain in the Visayan Voyage. 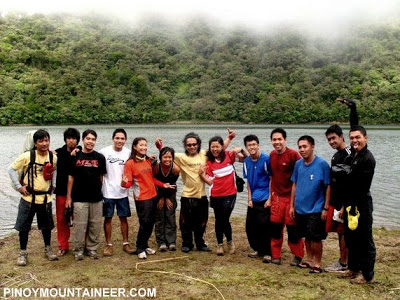 In behalf of the Visayan Voyage team, I thank Jimbo, Botox, and the other CNMCI guys like Lynel who made our stay in Mt. Talinis memorable! Also, we thank Roxy Mercado and family for hosting us in Dumaguete. Salamat gid! 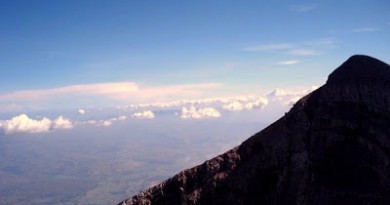 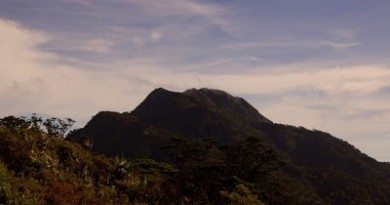 There were several peaks on the range, I don't know which one is Talinis. There were dome shaped peaks, there were conical peaks. There was one that is set apart from the range (or as it appears to me) and I wonder what is the name of that mountain.

Also I've heard from Sir Paul of CDNM/Island Life Outdoorshop that there's this peak that has no established trail and is considered more challenging than Talinis itself.

In DGT… seeing Talinis and not climbing it. A complete heartbreak. =(

Mt Talinis or Mt Cuernos de Negros is known for its four lakes (Nailig, Yagumyum, Halawig and Malingin) and Kaipohan, a solfatara covering around 4 hectares.Often left out in mountaineering itineraries on Talinis, however, are its two "cuernos" (Spanish for "horns") – the two highest peaks of the mountain. The horns include the trail-less 1903-meter peak overlooking Nailig and the 1700-meter which is accessible through a trail from Yagumyum.

For those who want to try MAITI trail i can give you guides.

@anonymous, it would be easier to respond to you if you wrote your point of origin. Let me just share some pointers (Sir Gid can of course correct me since he just recently went there):

If you are from Luzon. You may either go to Dumaguete via flight (PAL and Cebu Pacific). Both have flights to DGTE daily, one in the morning and another afternoon flight.

Another route is to take the Superferry from Manila to Dumaguete. Looks like once a week only.

From Cebu, you may take the ship (night trip usually) from Cebu port to DGTE. You can also ride the bus (CERES) from Cebu that goes straight to DGTE. Or fly from Cebu to DGTE via Cebu Pacific.

From Bacolod, obviously just take the bus. THough there is also a ship (looks like once a week too) to DGTE.

FROM Mindanao, Superferry goes to DGTE once a week from CDO. There are daily ships from DGTE to Dapitan, Zamboanga Del Norte and vice versa. If you are adventurous, try Davao to Camiguin, then take the roro to Jagna, Bohol. Take the van to Tagbilaran, then the fast craft to DGTE. Not really long. Leave Camiguin at 6 AM and arrive in DGTE past 7 pm w/ nice stroll in Tagbilaran before boarding the fast craft to DGTE.

Bottomline is that you have to arrive in DGTE (DUMAGUETE). From DGTE, you can either contact the Cuernos de Negros Mountaineers so they can assist you.Or you may visit the Tourism Center at the DGTE City Plaza to inquire. The local tourism officers there are very gentle, kind and helpful. There are several routes to traverse Talinis (either from towns of Valencia or Dauin). Both towns are just nearby DGTE.

Ensure that your trip to Talinis is properly coordinated (sometimes, even w/ the Military for proper clearance) so your trip will be safe and sound. It is wiser if you have a local guide too who just doesn’t know the dialect (Bisaya) but also the various trails.

Two days will be ok BUT to enjoy the place more, three days in Talinis would be recommended.

Good luck and have a safe climb to Mt. Talinis!