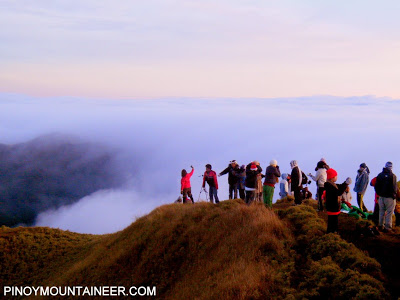 We broke camp at 0500H, leaving the Saddle Campsite at 0515H and reaching the summit just before the predicted sunrise of 0557H. However, no sun emerged, not until an hour or so later. Neither did Amuyao and Napulauan turn out to greet us. Still, Mt. Pulag’s summit remains one of the most majestic viewpoints in the whole Philippines. The sea of clouds looked mighty, serene, without any foreboding. I’m glad to be back, as always, I said to myself.
It was a great reunion at the top! Fellow Visayan Voyagers Coby Sarreal, Bianca Silva, and Ace Borja were there with the huge Trail Adventours group, and so was my good friend, musician Panggo Sarreal with whom I visited the Tabayoc and Tawangan areas north of Pulag in 2008. Touchingly, the Trail Adventours guys brought coffee at the summit for the participants! Such literal warmth from the organizers surely made the trip more memorable. 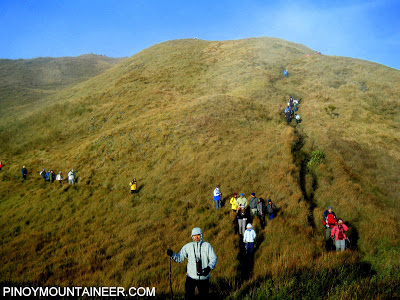 The most joyful of all reunions was yet to come, however. Like Gandalf to the rescue in Two Towers, Iron Lady Jo Steven suddenly appeared before us at the Lusod Junction at around 0815H! She was supposed to join the climb, but her flight from Samar got delayed and she couldn’t make it. Yet, even one day late, she somehow managed to reach Baguio, scramble to Bokod, ran up from the Ambangeg Trail in less than 90 minutes, and caught up with us!
Her presence brought cheer to the group even as Sir Martin, Jan, and Jason had to return to Manila. We were ready to traverse to Ambaguio! A prayer was offered on the occasion of our successful ascent, and Jo’s arrival. The prayer ended thus: “Open the skies Lord, so we may have a beautiful view. Open our hearts Lord, so we may in this beauty see the glory of You.” 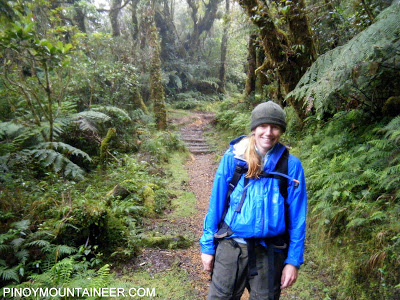 What a beauty it was to walk across the mossy forests of the Lusod trail! We almost ran the way down to the waiting shed in Natimlan, taking less than two hours, to the extent that Kuya Narsie thought it was possible to finish the Ambaguio Trail in just one day! Yet it was not to be. The incessant drizzle has insidiously turned into full-blown rains, impeding our progress.
Still, resting in Natimlan Village, it was fascinating to discuss the various possibilities that the Ambaguio Trail has to offer. To be begin with, there are three variants of the mid-section. There is one that entails crossing a mountain in Akiki-like fashion (probably nice if the skies were open); there is another that somehow heads south to the Kayapa part of Napo (add one day more and you can be heading to Mt. Ugo!). The middle way leads to Napo Village via the most gradual descent, and considering the bad weather, that’s what we took. 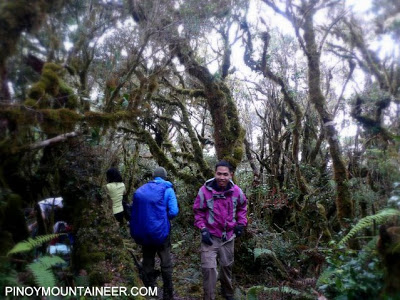 And so we continued. We crossed Katna-an River via the Bridge of Deception which could collapse anytime. Then, from the other side, we managed to ascend up to Napo Village, the usual camping spot halfway between the summit and the. But instead of making a right turn to the Napo Elementary School, we decided to surge further ahead.
The rains, however, continued to worsen, turning the trails muddy. The goal was to reach Bukig River before sundown, and then ascend to Poblacion. Yet the prospects looked bleak. We passed by two small hamlets, Dagadag Village and Ban-aw Village, and it was in the latter where we decided to spend the night. 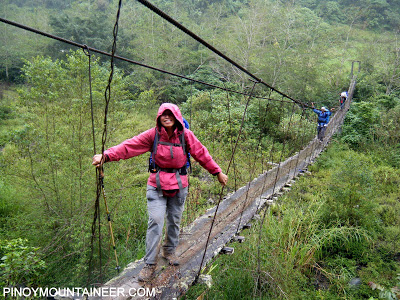 …. we are going to MT. Pulag this coming April 26-29 by Akiki – Ambangeg…. I am gathering suggestion… what would be the best gear for that climb…. we are just compose of 10….