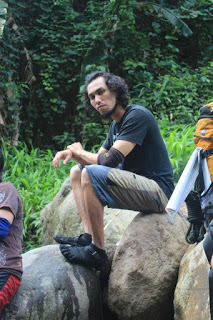 
UPDATE 2: I am very happy to hear and share the good news that mountaineeer Joey Vergara has been found and rescued in Mt. Malipunyo. He got injured by a hunter trap. Kudos to the rescuers for respondng!

BARCELONA – Mountaineer Jose “Joey” Vergara, from Calauan, Laguna, went missing in the Malipunyo Range from Sunday, June 16, 2013, until 12:25 PM of June 20 when he was found by rescuers injured from a shotgun trap by local hunters. “He had eight pellet wounds on his left leg. We had to carry him in a hammock,” said Daryl Comagon, one of the responders/rescuers, as the team was descending from the mountain.

Joey Vergara hiked Mt. Malipunyo over the weekend with a group of hikers, but he has also indicated in his Facebook wall that he intended to traverse to Manabu Peak in Sto. Tomas, Batangas. He told the rest of his group to go ahead, while he set off to do an overnight Malipunyo-Manabu Traverse:

Three days later, his father, Mr. Jess Vergara, pleaded for help and information regarding his whereabouts on Joey’s Facebook page. Search and rescue operations were mounted a day later.

The Malipunyo Range, with its many trails actively used by locals, is one of the most confusing mountains in the Philippines, with a number of incidents and/or rescues in the past several years, all of which ended with the missing hikers getting down safely.

Sha Bedural, a friend of Joey’s who gave updates on the situation, acknowledged the following for their efforts (and we commend them too):” PCI Oliver B. Ebora (OIC) and his team. Talisay officials, SAR led by P/Insp Fernando, Possible SAR Team from Brgy. Sta. Cruz, Sto. Tomas, WISAR Team

This system has been in effect ever since. Trekking on land, frolicking under the sea, spelunking inside caves or just simply setting up a tent must be done with a buddy.

Learn from others mistakes. A mountaineer has lost his life… and here we are again.

I agree with @Loco E at wag paka tanga.

hiking (like diving, snorkeling, and swimming) should not be done alone!