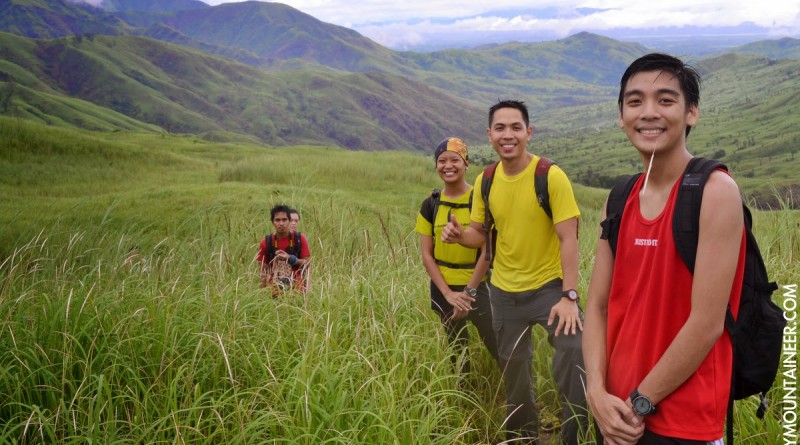 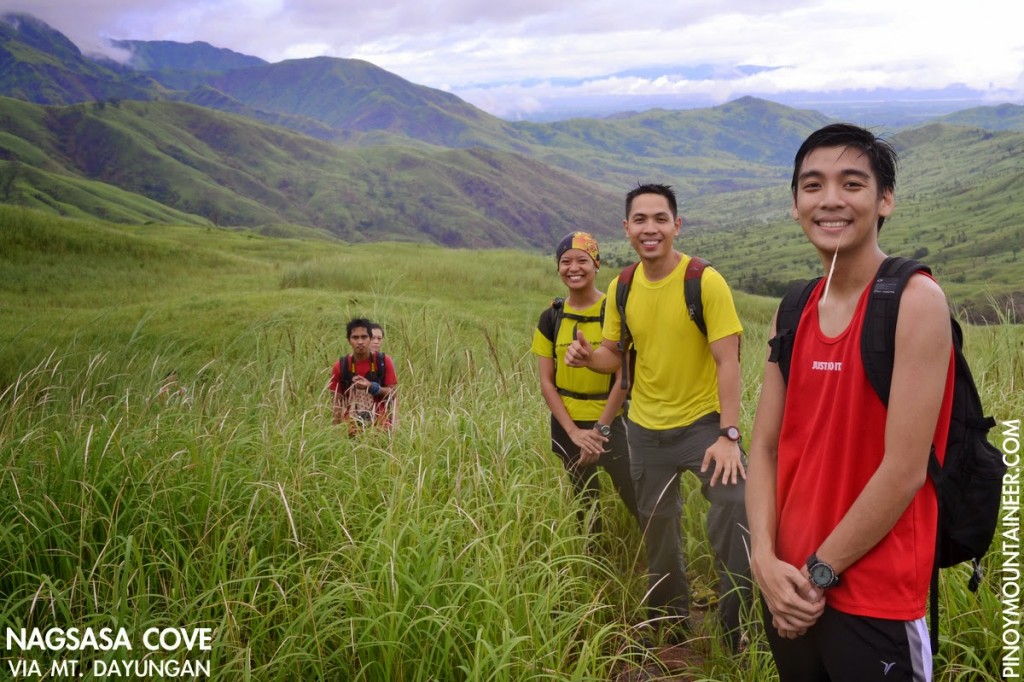 SUBIC, ZAMBALES – The Zambales Coastal Mountains and Coves in Subic and San Antonio, Zambales deserve more attention, beyond the popular Anawangin Cove and its emerging counterparts Silanguin and Nagsasa Coves. A series of interconnected trails make for endless possibilities in the area, allowing hikers to customise their itineraries – from short, two-hour treks to multi-day, multi-mountain adventures – else, extended dayhikes. 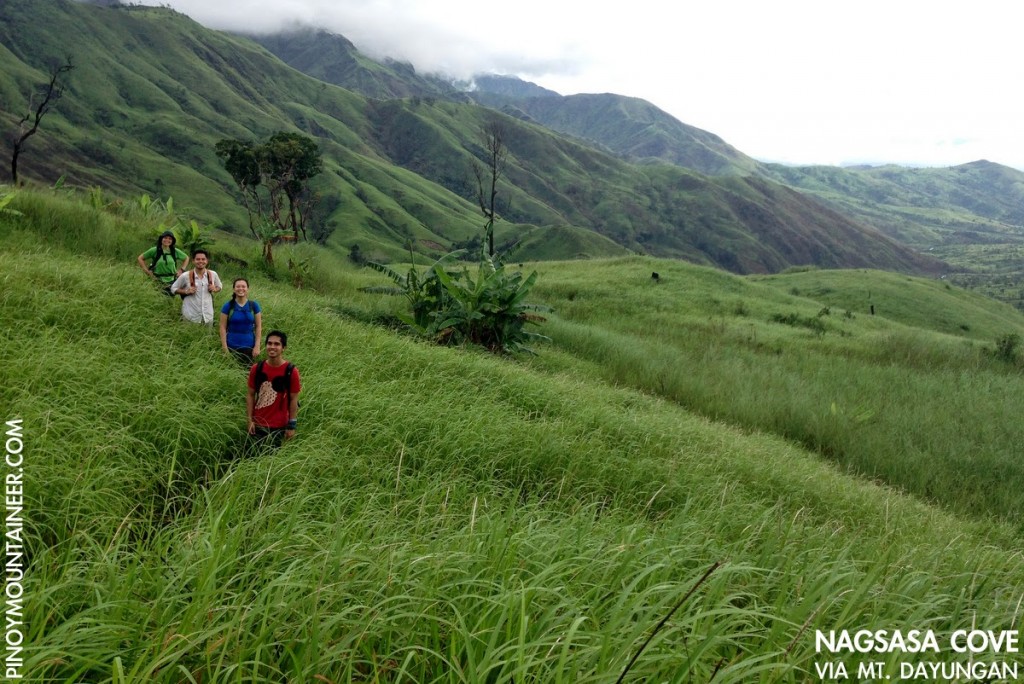 In 2011, I had the privilege of experiencing these trails by doing Mt. Balingkilat and Cinco Picos in one weekend, traversing the latter towards Silanguin Cove (see Hiking matters #145-147). Because the mountains are exposed to the sun and are notoriously exhausting due to the heat, we nighttrekked and dimtrekked both mountains, but still found the sun-kissed descent to Silanguin Cove very taxing. 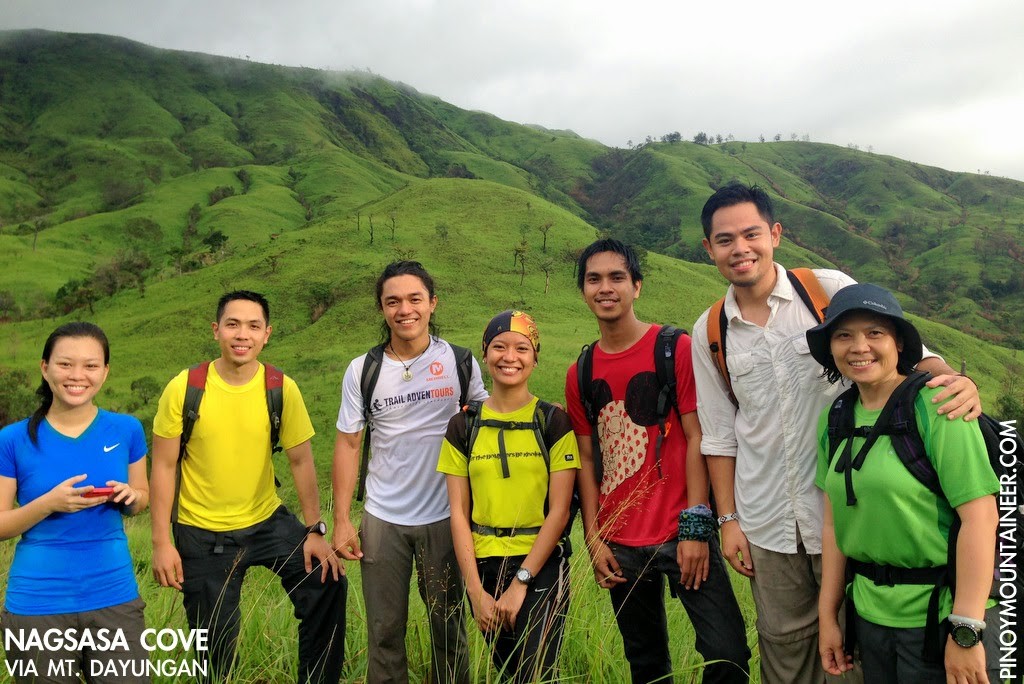 In Hiking matters #147, I wrote: “Tommy, our 15-year old guide, spoke enthusiastically about a possible Mt. Dayungan Traverse to Nagsasa Cove, which would parallel the Balingkilat-Anawangin and Cinco-Picos-Silanguin.” Today, I met Tommy again – he has grown – and finally managed to do exactly his recommendation, this time with his uncle Joseph, who served as our guide. Joining me were Coby Sarreal, Pam Aquino, Jenny Aggangan, Elijah dela Calzada, Osep Reyes, Dandan Real, and Cynthia Sy (the lady wearing green) – one of the most prolific hikers in the country, having climbed Halcon 18 times, and other major peaks with similar, mind-boggling frequency. 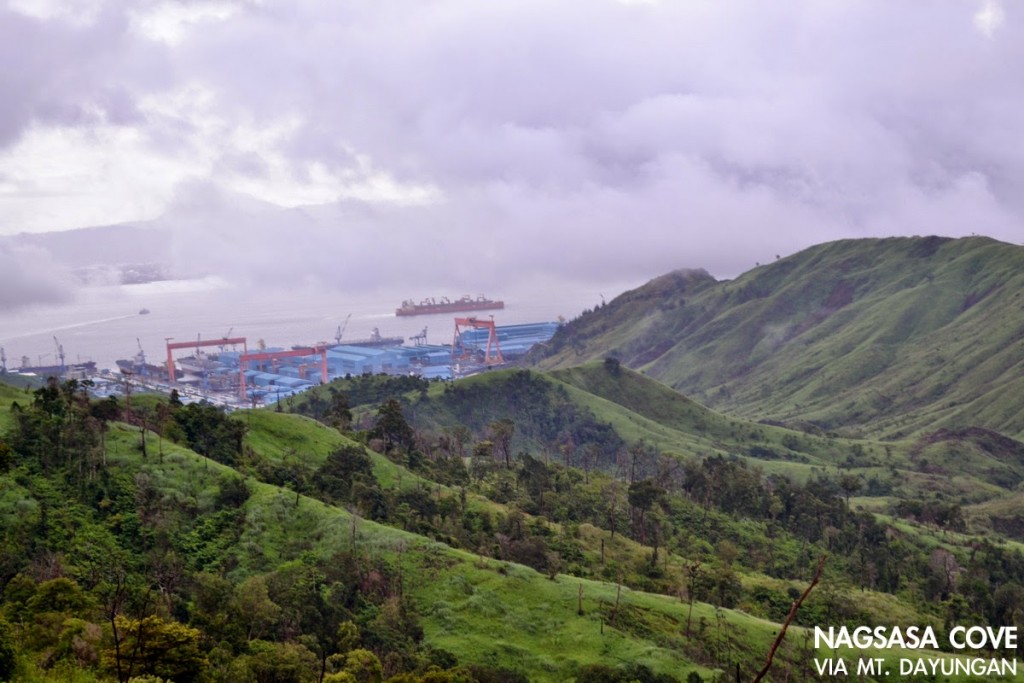 The initial part of the trail is actually exactly same trail leading to the Cinco Picos campsite, so it is like hiking Cinco Picos. In fact, this hike virtually includes the entire Cinco Picos hike – save for the traverse to Silanguin Cove and the peaks that are still inaccessible. Ten minutes before reaching the campsite, we made a right and northward turn towards Mt. Dayungan. 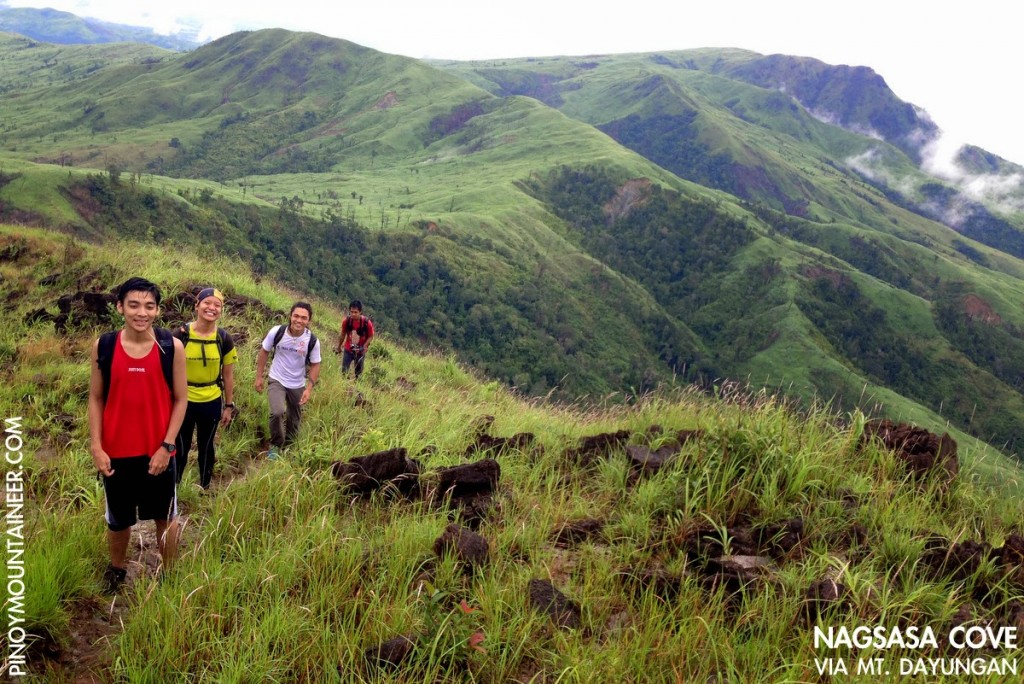 It was a pleasant walk; the slopes are gentle throughout and the green grasslands were a welcome view. Actually, this chacterterizes the hike throughout the trek. Save for the river crossing at the onset, and the forested approach to Nagsasa Cove – plus another stream towards the end – it was mostly grassland. 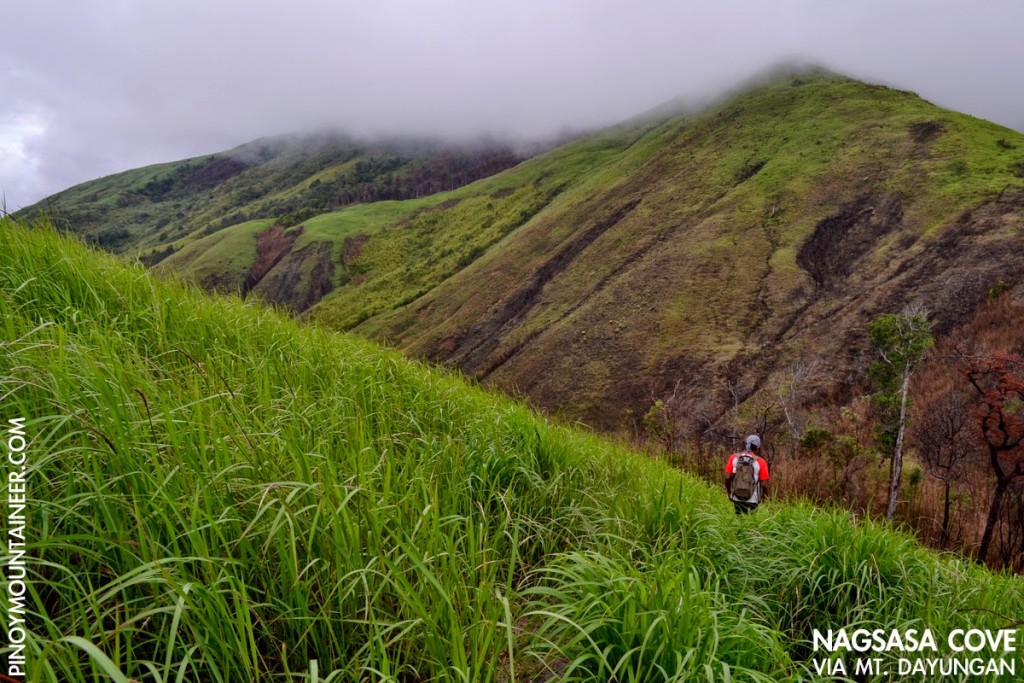 We raised the possibility of going up to the peak of Mt. Dayungan, but our guide vetoed it, citing the poor visibility and the uncertainty of sea conditions in the afternoon. Lending additional excitement to the hike is the need to take a boat to San Antonio – but of course, this step makes the hike all the more contingent on the weather. 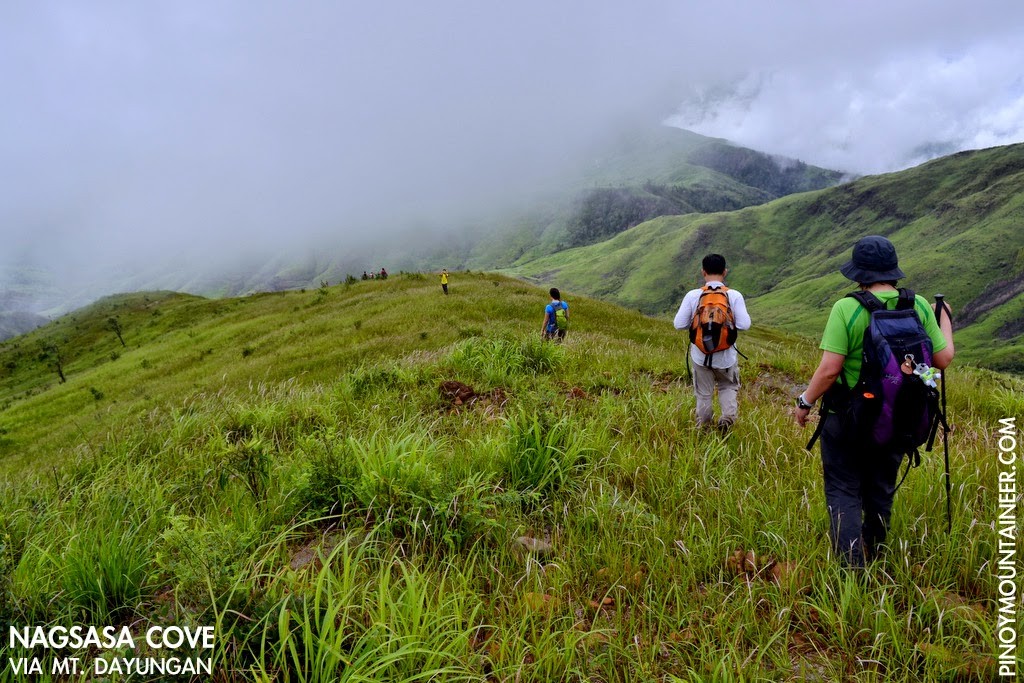 As we descended to Nagsasa Cove, I realised that hiking in the Zambales Coves area can be perilous during the rainy season – but with caution – i.e. avoiding the mountain when there’s a storm and listening to the assessment of your guide – it can also be very rewarding, having none of the heat that bedevils a regular hike up any of the mountains there. 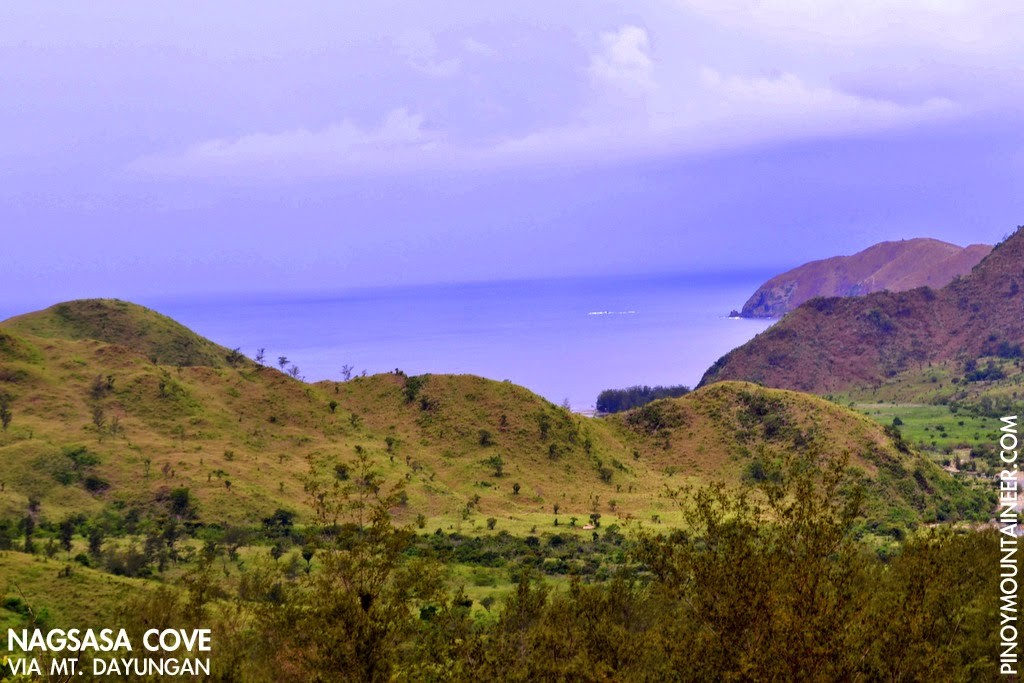 Nagsasa Cove came into view as we lost altitude, but I can imagine that it would have been better glimpsed from the peaks of Dayungan – and, as I can remember – at the summit of Balingkilat. When the sight of Nagsasa ends, the woodlands – and the menace of the mosquitoes –  begins, followed by a couple of streams that you have to cross. 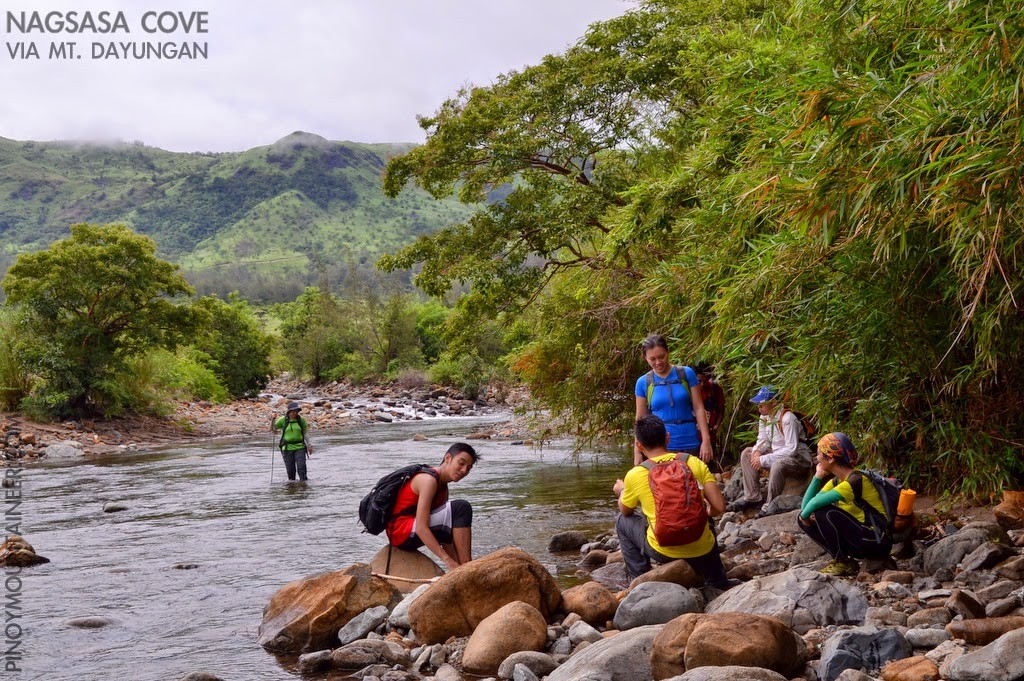 By 1300H, we had reached the greyish sands of Nagsasa. Not knowing how the weather will turn, and still having to take a boat to Pundaquit, I didn’t insist on hiking up the hill called Mt. Nagsasa – which would have offered a nice view of the cove. But, as I always tell myself, one can always hope for a next time. 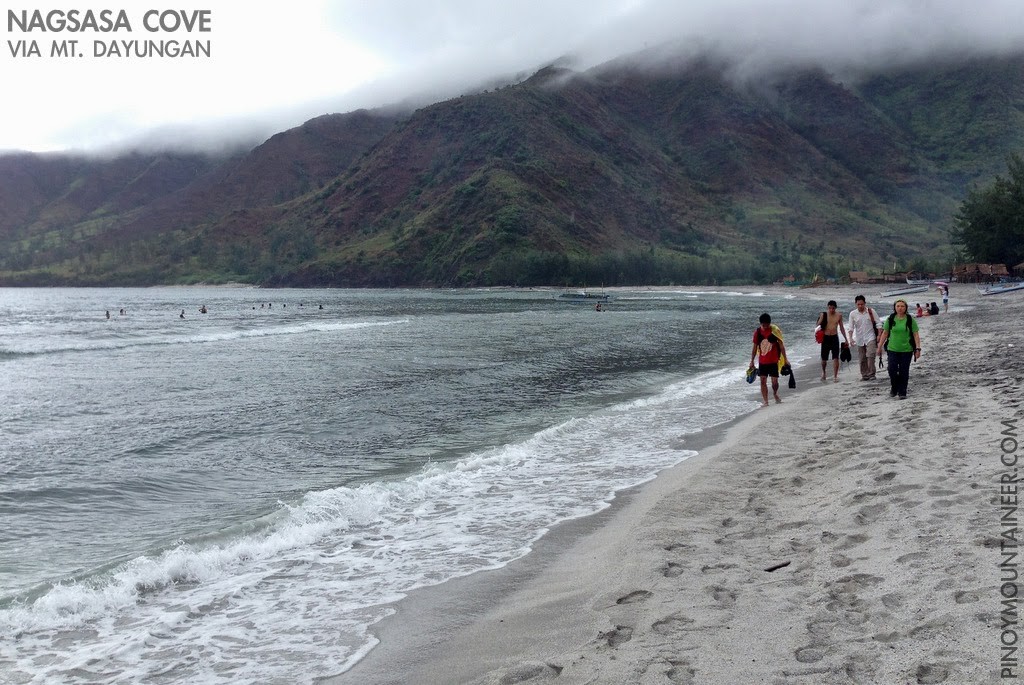 As in previous hikes in the area, we stopped by Subic for dinner, and then headed back to Manila. Thanks to everyone who joined me in this trek! It proved to be a refreshing break from my work in Palawan. 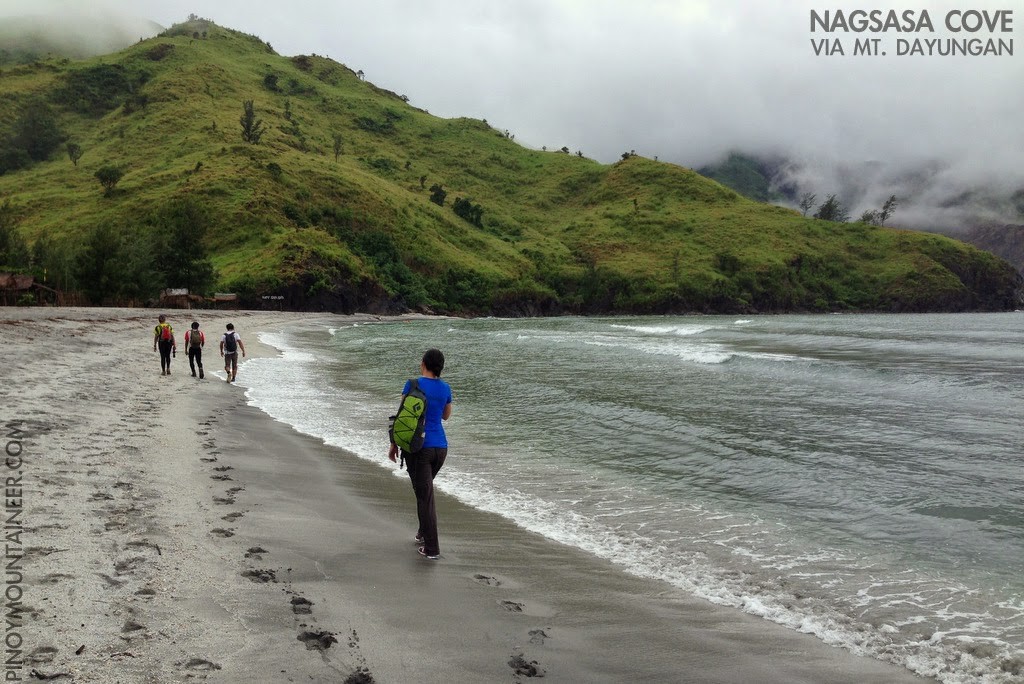 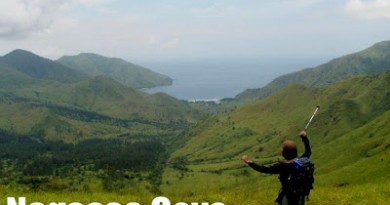