Our friends from the De La Salle Dasmarinas Mountaineering Society have informed us that there is an ongoing threat to the Mts. Palay-Palay / Mataas na Gulod National Park – more popularly known as the site of Pico de Loro – because a landfill is being proposed in the site. I don’t know the facts from both sides of this issue, but concerned parties may want to check out the latest development from the local groups which are lobbying against this. They have an activity on Thursday, with details from a letter by TALA (Ternatenos Against Landfill Association):

We, members of different organizations in Cavite have been exerting all our efforts to promote a harmonious relationship between man and the environment. For more than two years we have been fighting against the establishment of the proposed Sanitary Landfill project in Ternate, Cavite.

In line of our second year anniversary we are planning to conduct a rally to express our freedom of speech, show the sentiments of the people against the proposed sanitary landfill project and the reason for prohibiting its establishment in Ternate. The rally will run through the streets of Ternate. Assembly is at the front of Sto. Niño Parish, Ternate, Cavite, September 25, 2008, Thursday, 6:00 am.

In this regard, we would like to invite you and/or your organization to participate in the rally and deliberately speak the sentiment of the people of Ternate. Let us all say “NO TO LANDFILL”. You could bring your rally paraphernalia such as streamer, poster, flier, etc. The effect of a sanitary landfill in the health of the people and the environment is irreversible. This project is devastating not only for the present generations but as well as future ones.

Hoping for a your participation and favorable response.

Visit also the DLSU-DMS website for more details. Some infos have also been posted at the Environmental Corner of PinoyMountaineer. 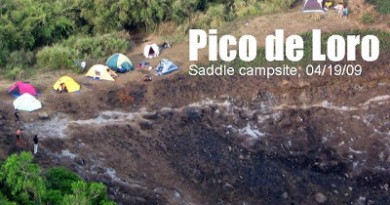 2 Comments on "Pico de Loro area to be made into a landfill?"

Mt Palay palay Natural Park, where Pico de Loro is located, is also home to some of the country’s endemic and endangered species of fauna and flora such as the rufous hornbill, Philippine falconet, Luzon bleeding heart and Philippine woodland frog.

The landfill will have a significant impact to the wildlife.

Just recently, more than 5,000 Ternatenos marched across town to denounce the landfill project.

They should not turn this nice mountain into a landfill, there are other ways to handle garbage. We are planning to go there this weekend.-GRFXMN