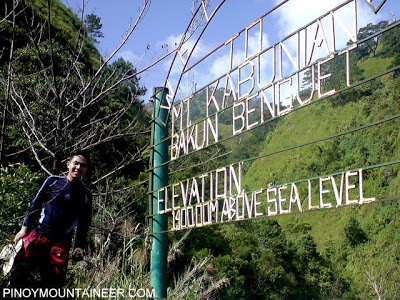 My alarmed sounded at 1730H on September 20, 2009. My immediate action was to check my injured left index finger. There’s no swelling! I tried moving it, and although there’s still a little pain, it is tolerable. Looks like there’s no fracture. I thanked God for the reprieve. I was also graeful that I was able to apply the RICE principles: rest, ice, compression, and elevation. Later on my climbmates Mayan and Sir Ding would attest that I managed to sleep with my left hand raised! As for “rest” – well – sorry – but I have to climb two more mountains! (As a precaution I wore glvoes to protected the affected area)

So I prepared for Mt. Kabunian. It is actually the most famous of the Bakun Trio, named after the highest deity in the mythology of the Kankaney, Kabunian. Born of the Skyworld, this Ifugao god was held to be the father of lesser gods and mankind. The mountain called Kabunian is a testament to his august being, and it was a revered place; a pilgrimage site in ages past.

Eager to have a headstart we began our climb at around 0730H. Instead of the anticipated ascent, however, we were in for an initial, steep descent. Bakun Poblacion after all sits on a plateau in itself – at 1150 MASL and we headed down to Lun-oy Valley, 950 MASL, before gaining elevation again. Very soon the familiar Cordillera environment of pines and open trails emerged: a welcome change after the dense and wet woodlands of Lubo. Tenglawan loomed high and majestic in front of us (NE) while Mt. Lubo formed the imaginary triangle (SE). The views were expansive and we could look down the meandering Bakun river, ever-nourished by the countless waterfalls. 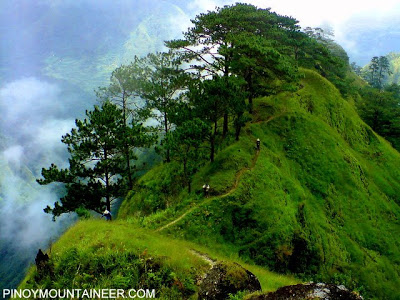 Amazingly the trails were well-maintained. Our guide explained that the trail has been used since Pre-Hispanic times as a trade route that enabled the Igorots from Mountain Province, Benuget, and Ifugao to go to Ilocos by way of Kayapa village and buy much-needed salt and other commodities not found in the mountains. They also took wild boar with them. One such trader was named Takdag Camsit. Unfortunately while he was crossing the trail just before the summit of Kabunian, his wild boar went amok, pulling his master with him — to their demise. The hill (1475 MASL) has since been named after the poor trader, and it is the steepest part of the trail, supported with ropes and railings, to prevent another such accident to happen.

After crossing Takdag Camsit, we passed by a scenic, precarious steel hanging bridge, connecting the hill to the final rise of Kabunian. The views here are breathtaking. As you approach the summit, we came upon another noteworthy sight – wooden coffins that clung on the side of the summit’s walls. In olden days, there were more of these wooden coffins in Kabunian. Perhaps they thought that by being buried in the holy mountain they could partake of the supposed divinity of the place. 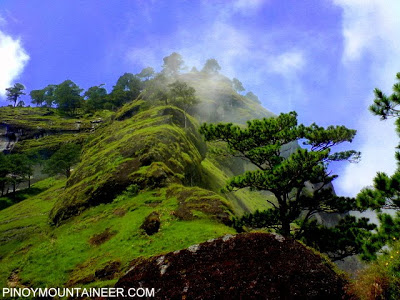 Finally the trail bifurcates, with the westward path leading to Brgy. Kayapa (not to be confused with Kayapa of Mt. Ugo) and ultimately to Tagudin, Ilocos Sur. The northward part brings you to the final hundred meters of the trail – and then the summit. Although the clouds have set in by the time we arrived there, it is still a very nice place with cool breezes, pines, and spacious grounds that can easily be turned into a campsite. My happiness in reaching the summit was heightened by the fact that just several hours ago, I thought I may have to pack my bags and abort my participtation. I thanked God for giving me a second summit. Whereas the other day was hectic, post-fatigue, rainy, and ; this climb was relaxing, sunny, safe, and beautiful. At the summit of Mt. Kabunian I wrote: “This is as good as a Cordillera dayhike can get.”

Yet Tenglawan – the most difficult of the three – still awaited us the next day. On the way back, with its giant presence looming over us, I wondered what lay in store for us in its slopes. 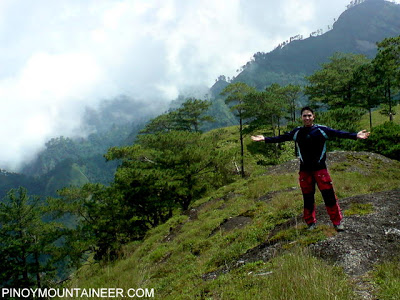 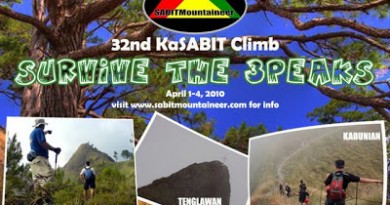 on my bucket list this year.. sana maakyat na..:)

This mountain is breath taking…

would it be ok to climb it during the rainy season?