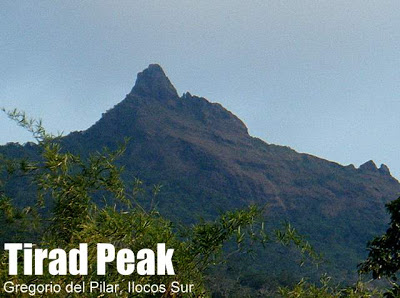 TIRAD PEAK
Gregorio del Pilar, Ilocos Sur
Major jumpoff: Poblacion, Gregorio del Pilar
LLA: 1388 MASL
Days required / hours to summit: 2 days / 6-8 hours
Specs: Major climb, Difficulty 5/9, Trail class 1-4, Historical trail
BACKGROUND
An exciting new destination in the Ilocos Region is Tirad Peak, which towers above the historical trail of Tirad Pass. Virtually unknown to mountaineers and deemed unreachable by locals, PinoyMountaineer.com coordinated with the Tourism Board of Gregorio del Pilar town (GDP) in a series of explorations that ultimately led to the first major climb up the summit on occasion of the 2nd PinoyMountaineer Annual Charity Climb in February 7-8, 2010. With the trails now established, it is possible to visit Tirad Pass and Tirad Peak in one trip – combining a scenic, historical trail with a challenging and very rewarding peak to conquer.
This trek starts from the Poblacion of GDP, or you can also ask your jeepney to take you closer to the traihead of the Tirad Pass trail. It was called ‘Old Spanish Trail’ because it was used during Spanish times as a major gateway to the Cordilleras. It was sufficiently wide for horses to pass; hence the “Battle Above the Clouds” could be fought there. Along the way, references to the historic battle could be found. You can rest at the cave where del Pilar slept the night before he was slain in the battle. Closer to the Tirad Pass Shrine, which also serves as the campsite, there is a “Lonely Trail” that leads to the “Sniper’s Knoll” which was allegedly the spot where the American sniper that shot del Pilar to death was stationed.
The campsite itself is scenic. Facing west one can behold the plains of Ilocos Sur and South China Sea beyond; the breezes are cool and wide campsite can accommodate a large group. The Shrine which features the valiant ‘Boy General’ mounted on a horse, makes for nice photo-ops.
The next day, an early morning assault up the summit is recommended. It takes 4-5 hours to reach Tirad Peak on light packs. This time, you will follow the Americans in the trail took to catch up with the escaping Philippine Army, according to history books guided by the traitor Januario Galut. The woodlands are at times winding, for most part unremarkable, but once you begin to see a towering Tirad Peak ahead of you, the excitement begins.
At the foot of Tirad Peak, the trail begins to be very steep. The trail is rocky, and some bouldering is required to reach the peak. Tirad Peak calls to mind Pico de Loro in terms of the peak’s contours; whereas it is also reminiscent of Batulao in terms of the grassy terrain, and the steep, 150-meter assault. The sweeping views culminate at the pinnacle, which enables you to view sections of Ilocos Sur, Abra, and Benguet. The vast panorama is breathtaking. Truly, Tirad Peak is another good reason to climb in the North!
ITINERARY
Day 1: GDP -> Tirad Shrine campsite
0300 From Pasay or Cubao, take bus to Candon, Ilocos Sur
1030 ETA Candon. Lunch, purchase supplies
1300 Take jeep to Gregorio del Pilar (P75)
1500 ETA GDP; courtesy call, register
1530 Start ascent via Tirad Pass
1730 Arrival at Gregorio del Pilar Shrine; set up camp
1800 Sunset viewing
1900 Dinner / socials
Day 2: Tirad Peak assault
0400 Breakfast /prepration
0430 Take Lonely Trail to Tirad Peak
0830 Arrival at Tirad Peak
0900 Start descent
1200 Back to campsite
1300 Start descent
1500 Back at GDP; take rented jeep back to Candon
1800 ETA Candon / Dinner
1900 Head back to Manila
TIRAD PASS TRAVERSE TRAIL MAP 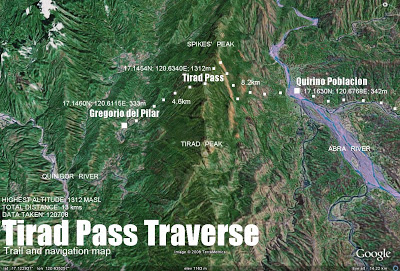 This map is presented to have a geographic correlation of Tirad Peak with respect to the Tirad Pass Traverse trail.
SPECIAL CONCERNS
Transportation. It is possible to rent a jeepney from Candon to GDP or vice versa, but the rental cost is quite expensive (P1800/way). The much cheaper alternative, especially for small groups, is to adjust the itinerary according to the regular jeepney trips. Jeepneys leave Candon to GDP at around 1300H daily, and they return to GDP at 0700H, daily as well (P75 either way).
Importantly, it is possible to merge a Tirad Peak assault with a Tirad Pass traverse to Sagada. One can interrupt the traverse at Quirino town (the end of Tirad Pass trail proper). From Quirino, there are trips to San Fernando, La Union; Candon; and nearby towns: they likewise leave early in the morning.
Logistics. It is best to coordinate your trip first with the tourism officer of GDP, Mr. Macario Burgos. He may be contacted at +639265331076. There is a registration fee of P25/person for the park. U
Cellphone signal is present in most parts of the trail.
TIRAD PEAK PICTURES 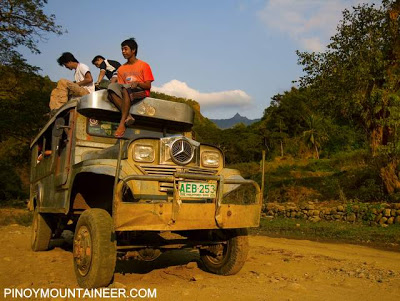 Jeepneys are the only mode of transportation to Gregorio del Pilar. Take note of the sharp rise of Tirad Peak at the background. 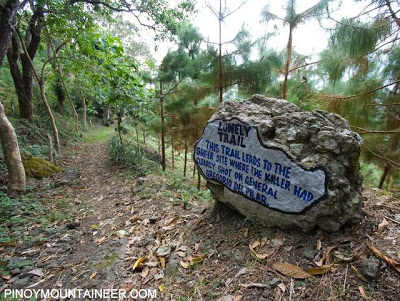 Near the Tirad Pass campsite, the Lonely Trail commences, ultimately leading to the trail to Tirad Peak. 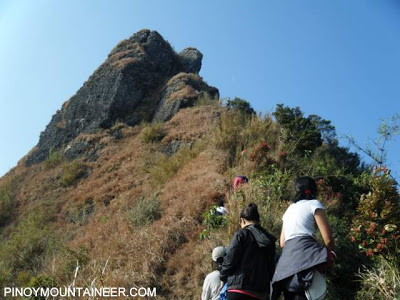 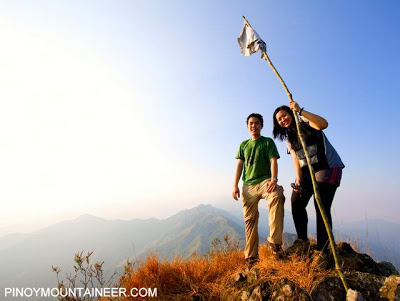 The summit of Tirad Peak is barely enough for five persons. The views are spectacular. 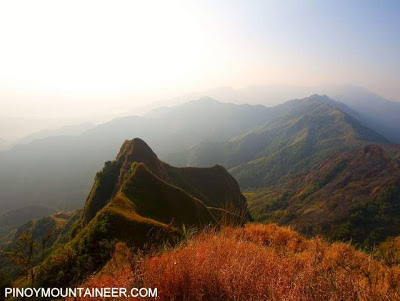 View of the Ilocos Sur mountains that border Abra and Benguet. See how the rolling slopes of Tirad Peak call to mind Mt. Batulao.
TRIVIA 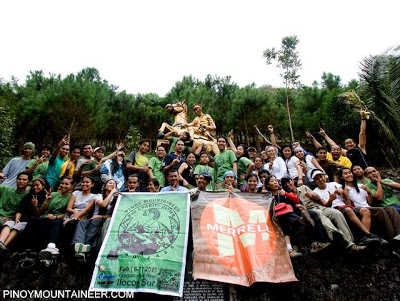 Tirad Peak and Tirad Pass served as the venue for the 2nd PinoyMountaineer Annual Charity Climb on February 6-7, 2010. A medical mission was held prior to the climb. The theme color was green and the climb comprised of 62 participants, including delegates from ONE Degree Mountaineering Group (ODMG) from Laoag, Ilocos Norte who provided us with invaluable assistance.
RELATED POSTS
An account of the Tirad Peak climb is recored in Hiking Matters #79.
WEATHER OUTLOOK: GREGORIO DEL PILAR
Weather Forecast | Weather Maps | Weather Radar 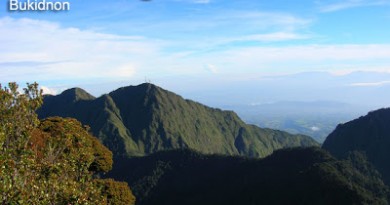 Any specific date when youre going to climb?

I successfully climb Tirad Peak on March 01, 2014. The trek to the peak took me for almost three hours from the Marker to the Peak.

My target date for climbing this mountain will be Feb 2014. It will be my first climb into one of the most iconic mountains in the Philippines. I will be going alone and it will be a fulfillment for me if I succeeded. 5/9 difficulty is new to me. It may be even deadly. Reading the experienced climbers here like sir Mark "Maj" Anthony Villacorta, it will guide me enough.

So, bringing enough and sufficient supplies and equipment, I will try to climb it no matter what before the hot summer begins.

Please contact me if you care to go along with me or if you have plans.

i have lived in GDP for the past 17 years and for me it is best to trek the mountain from September to January as the she is still fresh green: the leaves are new and the climate, cool.

we just climbed Tirad this dec.28
there is a water source in the trail going to the shrine(campsite),(2km from jumpoff) and another unlimited water source in the shrine…take note of the transpo.
once a day lang silang bumiyahe back to candon city P80 each person…morning po sila bumibyahe around 7am-8am. kasi if mag-rerent talaga kyo ng jeep aabutin ang fare ng P1500-P1800.ganun din po pabalik P80 pesos each..