NORTH LUZON EXPRESSWAY – Today I climbed with hiking buddies Julian Canero and Jo Steven; we were supposed to climb just one mountain but we ended up climbing two! First up was Mt. Manalmon, in Brgy. Madlum, San Miguel, Bulacan. It was actually a very brief climb – it just took us 1.5 hours to complete the trek, up and down including a mini-picnic at the rocky top. Although it was just around 180 MASL, it offered great views of the Biak-na-Bato National Park, and of Arayat.
Rising to the west was Mt. Mabio, which also belonged to the Biak-na-Bato Nationa Park. Curiosity got the better of us and we decided to climb it as well! We had no guide, only Julian’s GPS to guide us – an a visual of the stunning limestone cliffs. We took a rough road from Sitio Madlum towards the south then west, and stopped at the junction at the foot of the mountain.
Halfway through the trek, we realized that the trail has ended! The climb proved to be a harrowing, cliff-scaling ascent obstacled by numerous bamboo trees in various states of growth and decay. Even as I write this, my companions are laughing, remembering the experience! We ascended a total of perhaps 200 meters of rock, until we reached the ‘Pinnacles’. This peak is the first that you will encounter from the jumpoff, and it is also one fo the highest points of the mountain.
The limestone cliffs were stunning, though, and the views breathtaking. Arayat could still be seen. It reminded me of the Tarak Cliffs in El Nido. We’ve got nice pictures but it’s kinda hard to upload them while aboard a car so I will just blog about it later! It’s time for a nice foodtrip for now! 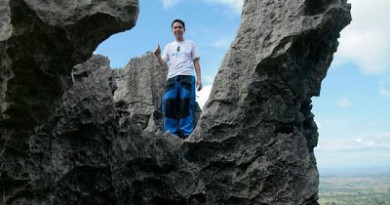 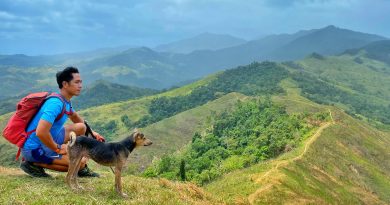 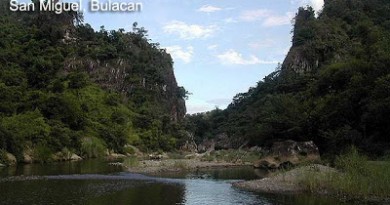 1 Comment on "Hiiking matters #125: Two mountains (Manalmon and Mabio) in a daytrip of Biak-na-Bato N.P. in Bulacan!"