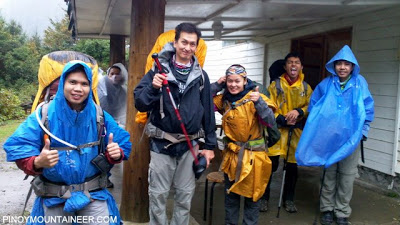 Continued from Hiking matters #210: Cika Hut (七卡山莊), two kilometers away from the trailhead, was our cozy starting point on Day 2 of our Snow Mountain climb, but we knew we had a long way to go: 5 kilometers to 369 Hut (三六九山莊), and from there, 3.9 kilometers to the summit. It was raining, just like the previous day, and some of the hikers have decided not to push through. But, amid the rain, we carried on, starting our Day 2 at around 0745H. 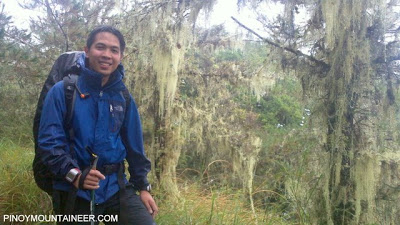 Fortunately, the hike was actually very manageable, the mud was minimal due to the well-maintained trail. We marveled at the beautiful trees, most of which cannot be found in the Philippines — but the lichen was reminiscent of the trees that surround Mt. Apo’s Lake Venado. Soon, we had reached the end of the forest line, and even though the clouds completely obscured what would have been fantastic views, we had our first reward – the arrival at Snow Mountain East Peak, 3201 MASL. We arrived there at 1012H. 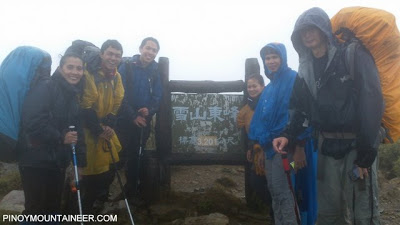 Around and beyond the East Peak, the grass was the very familiar dwarf bamboo that we see in Mt. Pulag. Indeed, although it is a rare sight in the Philippines – I have only seen it in Pulag, Kalawitan, and Napulauan – this kind of grass is actually very common, and extensive, in the high peaks of Taiwan. 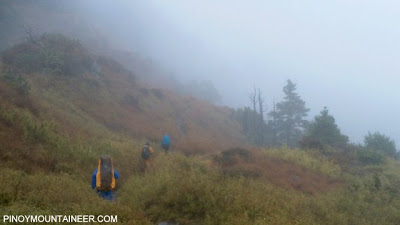 After another hour of trekking, we arrived at the 369 Hut (三六九山莊) where we had a quick lunch of noodles. The weather continued to be gloomy, and since we were already past 3000 meters above sea level, it was very cold. Still, we had to prepare ourselves for the highlight of the entire climb – the inclement conditions notwithstanding – the ascent of Snow Mountain. 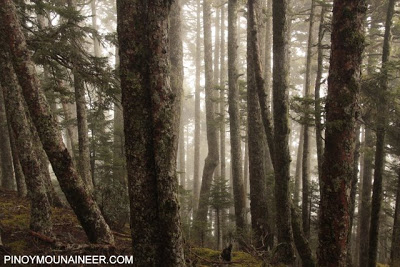 We resumed our trek at 1330H. After just thirty minutes of trekking, we reached the Black Forest, one of the most beautiful – if not the most beautiful – part of the trail! There was so much beauty and grandeur in this trail that it rendered me, for a moment, speechless and immobile: I had to pause to grasp the wonder that I beheld.
Fortunately, I was also able tot take a video of my teammates walking through this beautiful trail. Although I had complained of rain obscuring what would have been splendid sights in the earlier sections of the trail, this time, the rain even enhanced the view, because of the mist that made it the forest look even more enchanting. 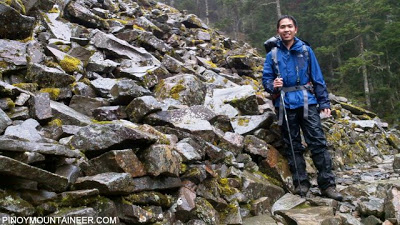 And yet, the challenge was far from over: past the Black Forest, we no longer had cover from the chilling winds, and visibility was minimal. Moreover, as we went higher, the air got thinner, the temperature got lower – so the odds were stacked against us. But everyone was still feeling okay and without a real impediment to proceed, we pushed on. 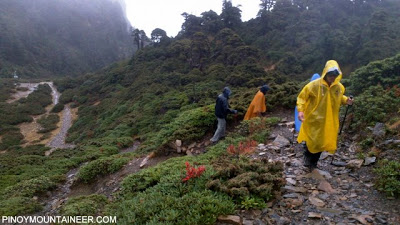 More rock formations emerged and the remaining flora that grew were stunted, much like those that grow in the high peaks in the Philippines. Unfortunately, the clouds continued to cover the views, but that was no longer on our minds then; our focus was on the summit, which was approaching, even as time was running out. 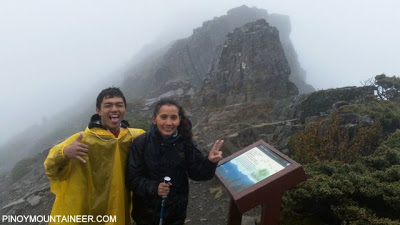 There was no longer any conversation among us, and it would have been drowned by the winds anyway; it was a struggle to push forward, given the conditions, and yet to stop would be to invite the cold to set in. There was no other way, but to push onward. Finally, at 1620H, we reached the summit! At 3886 MASL, we were at the second highest point in Taiwan! We could not stay long but it a triumphant moment and the whole team was so glad, and I said a little prayer of thanksgiving, for despite the odds, we still made it. 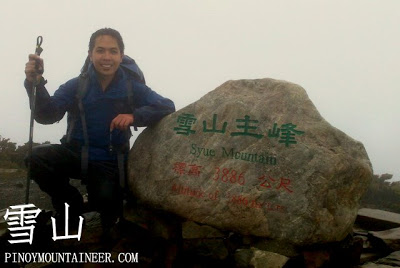 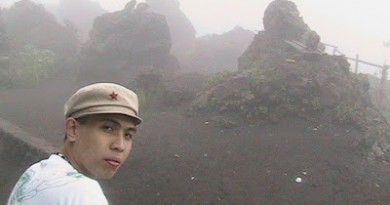 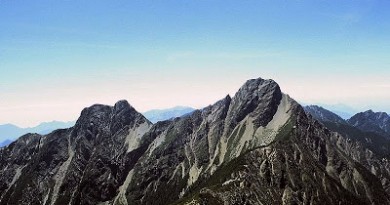