PinoyMountaineer.com – We have received both mass media and personal reports of an incident on Sunday, September 4, 2011, in Rodriguez (formerly Montalban), Rizal involving mountaineer Adrian “Adjong” Alba, age 24, from Brgy. Rizal, Makati City. At around 9:40 in the morning, he was swept away by strong currents in Wawa river while he was crossing the river using a single rope and his body was found downstream, near the hanging bridge in Barangay San Rafael, some kilometers away from Sitio Kayrupa where he was last seen, in the morning of September 7.
He was a guest of the Outdoor Addicts group when the incident happened. Details of how and why it took place are now under investigation. For instance, the tourism officer of Rodriguez told GMANews that the hiking group did not register with the municipality or the barangay. The Philippine Daily Inquirer also reported some lapses in the organization of the climb. According to their report, initial investigation showed that some members of the mountaineering group had “shouted at him to take off his backpack when he lost his grip on the rope they were using to cross the river.” The same report adds that the backpack could have been used as a floating device by the victim. However, in fairness to the Outdoor Addicts, these general principles may be superseded by circumstances at hand and thus may not be used to judge a specific incident.
Calls for accountability have since mounted, with Adrian’s family and many mountaineers calling on the the participants and the organizers to shed light of what happened. Two days after the incident, PinoyMountaineer called for restraint in Facebook: “While we agree that it is important to know why and how this unfortunate incident regarding Adrian Alba happened, I would also emphasize the need to respect everyone involved, including Adrian’s family and hiking companions in this painful and difficult moment.”
Adrian was a fourth year college student of Hotel and Restaurant Management in Perpetual Help College of Manila.
A eulogy for Adrian is posted in PinoyMountaineer as Adrian Alba: A Fellow Mountaineer We Will Always Remember. The burial of Adrian Alba will be on Sunday (September 11, 2011). To those who would like to extend their gratitude by providing donations. You may contact Faith Alba (Adrian’s sister) at 0920.223.7469 or (02) 903-0851.
NEWS REPORTS
These news reports will be kept in an offline archive by PinoyMountaineer for future reference
INQUIRER.NET: Rizal officials say mountaineers had no permit
GMANews.tv: Missing mountaineer found dead in Rizal province
Philippine Star: Mounatineer’s body found in Rodriguez, Rizal
Manila Times: Missing mountaineer pinned by stone
Adrian Alba is inscribed and commemorated in In Memoriam: Registry of climb-related deaths. 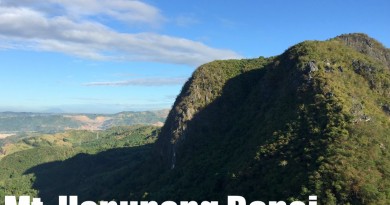 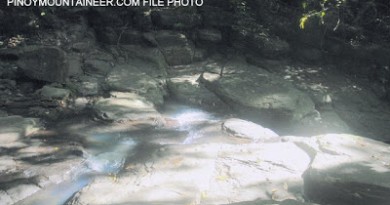 Im so sorry if i started the word FMC here. "The advances in technical skills and equipment are no match against mother nature." that is so true, but i dont dare to test myself against nature. True, lahat tayo dumadaan sa pagiging newbee but that is not an excuse para e overlook ang safety. I dont try to climb or do activities during bad weather. Iisa lng buhay ko, ayoko e risk yun. Please lets be responsible enough to put safety first.

Sa lahat ng mountaineers, veteran man o newbee, wag nating hayaan ma ulit to. This is a lesson for us.

Lets just pray for the demise of Adrian Alba. . .

In our creed, we disciplined to preserve and conserve the nature, aren't we forget ourselves, maybe because of what we call adrenalin or too much excitement, that we go beyond our limits, eh hwag naman lagi sana, remember sa bundok, iisa lang ang pangalan natin, in fact iisa lng ang tawagan natin, Kultura natin ang magtulungan dun sa bundok, so ganun din sana gawin natin sa patag, Now we lost another comrade, so para maging makahulugan na rin ang pgkawala nya, tulungan natin ang magkabilang panig, and for ourselves, we learn from the lessons of which they committed.

Guest
ginger spices you up

Sir Adrian, where ever you are, i know you're in good hands

all the comments here are all correct. we are commenting based on how we feel and think about the situation. i admit a am on the side of outdoor addicts. i love this group and i've been with them since 2001. i may not be with the group as often as the earlier years but i believe in them.
the urge of experiencing extreme sports is a freewill to follow. no one wanted anything bad to happen. it's agonizingly painful to lose someone we love but let's take away the hatred to blame others. i understand how adrian's family feel but let's not judge those that are behind these. let's leave the family and the group to talk it over themselves.
minsan talaga BALITA ang OA. if you're really there you'll realize na exaggerated pala ang lahat. since we are all not there, let's just leave everything to the immediate people concerned.