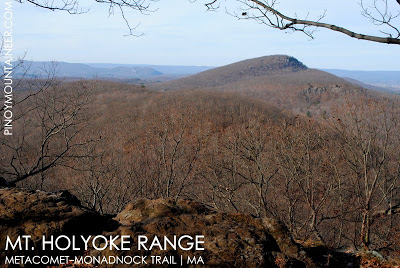 AMHERST, MA – A day after I arrived in Massachusetts from Manila, I did my first hike in the United States: A very nice traverse through the Mt. Holyoke Range via a really nice section of Metacomet-Monadnock Trail. This trail runs a whopping 183 kilometers (the distance between Manila and La Union) but I just did around 11 miles (18 kms), passing through the length of two state parks the Mt. Holyoke Range State Park and the Skinner State Park. This blog post describes the first part of this long dayhike.
My sister drove me to Harris Mountain Road in Amherst until we reached the trailhead for the Metacomet-Monadnock Trail (commonly known as the ‘M-M trail’) which coincides with a good section of the beautifully christened Robert Frost Trail. Frost, one of my favorite American poets, taught in nearby Amherst College and lived in the area — and so did Emily Dickinson! 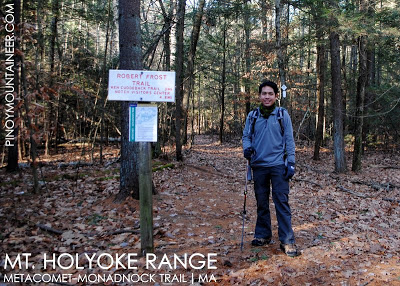 So I started trekking at around 0930H. Now that it’s almost winter here, the days are short, and by 1600H or so, the sun would begin to set. So there was a bit of time pressure. But I was quite happy with the temperature — which at daytime hovered from 1 to -5 Celsius. At first I donned a light fleece shirt over my base layer, but as soon as I warmed up, I took it off. 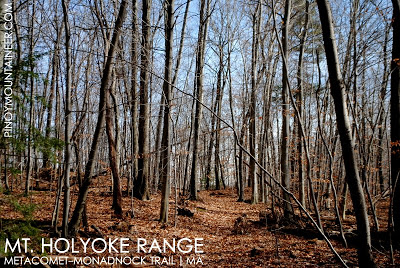 I hiked alone, which I didn’t mind since I was confident that the trails were well-established. The only problem with solo hikes is that you don’t get to take pictures of yourself, but that’s easily solved by cameras with self-timers. Besides, who would mind having to trek through a beautiful place that inspired some great poetry? Emily Dickinson, in a poem she penned titled “The Mountain”, perhaps she had the vast plains of Massachusetts and small but imposing Mt. Holyoke in mind with this verse :
The mountain sat upon the plain
In his eternal chair,
His observation omnifold,
His inquest everywhere. 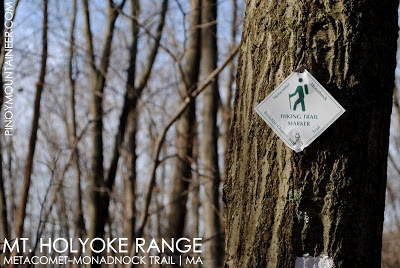 As I started trekking, a pileated woodpecker greeted me — there were several of them I encountered throughout the hike. There were many other birds, and I regretted not bringing my binoculars! The squirrels scurried through the woods. This will be my America, I thought: the great outdoors, the wilderness, away from the citadels of the modern world and the sound and the fury. I basked at the cold air, the trees bereft of leaves, and the endless trail. Each mountain is a poem, and hiking is poetry in motion. 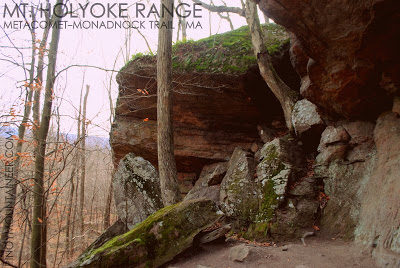 The first peak of the day was the 920-foot Long Mountain. From this high point, I could see Mt. Norwuttuck, the highest point in the Holyoke Range at 1106 ft; as well as the surrounding plains. I went on, encountering some challenging, rocky parts of the trail, interrupting the otherwise gradual and easy trail. The most notable part of this leg is the Horse Caves, which consists of some rocky ledges that somehow figured in the American Revolution. 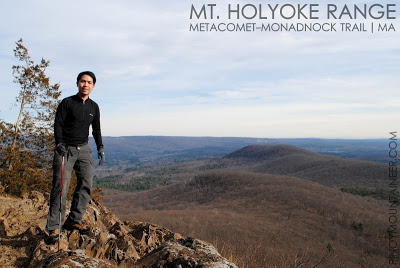 Finally, I reached Mt. Norwottuck. I rested for a while, trying to identify the surrounding towns: Hadley, South Hadley, and Amherst, as well as notable areas like the University of Massachusetts – Amherst campus, and Amherst College. It was very nice to be there, and I am thankful to God for giving me great weather. 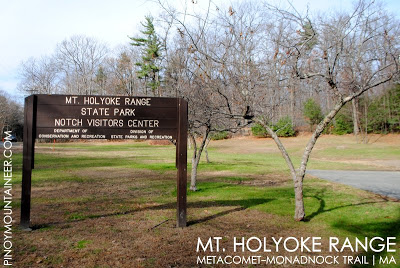 From Mt. Norwottuck, it was an easy descent to Notch Visitors Center, where I had lunch, at 1230H. It was the end of the hike, and the beginning of another: the Seven Sisters’ Traverse, which I will be describing in Hiking matters #307. 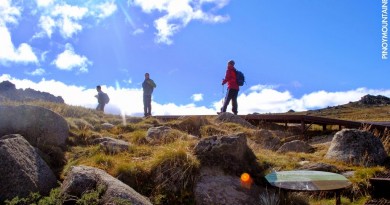 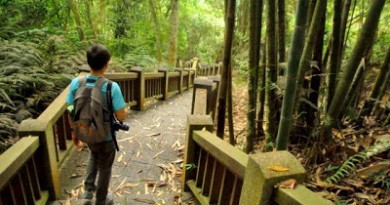