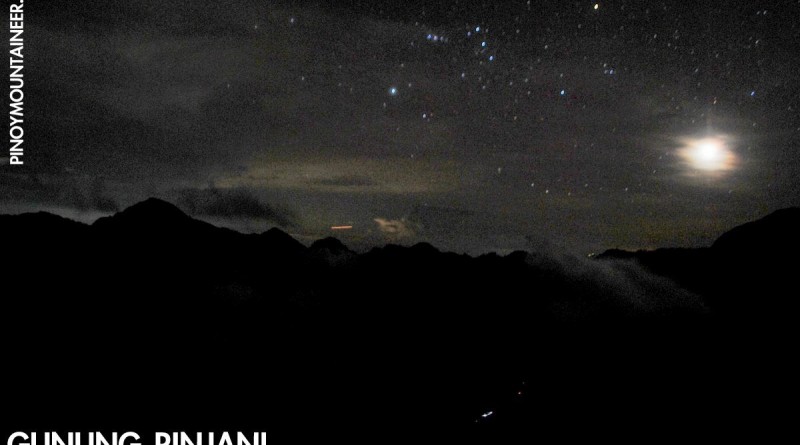 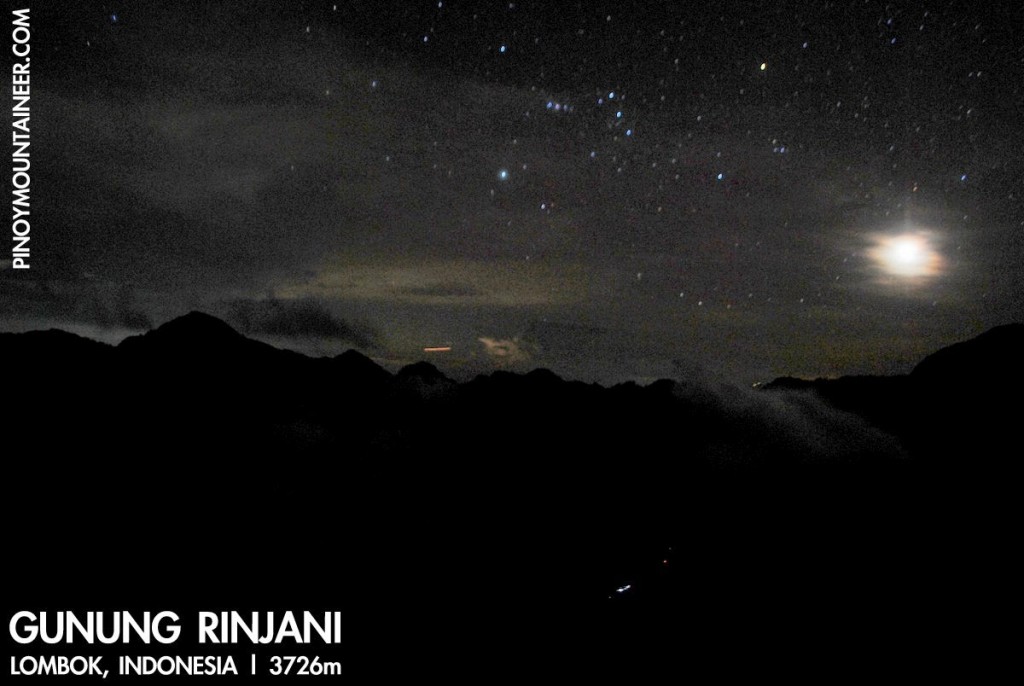 LOMBOK, INDONESIA – The summit assault is the most exciting part of every climb, because it is the moment when the hiker comes face to face with his goals and dreams. Oftentimes it is also the most difficult part of the trail: a natural consequence of its higher altitude, but also because trails tend to be steeper and narrower as you go up. All this makes it challenging, at least for me, to fall asleep on the eve of a summit assault, because of the excitement and anticipation. Fortunately, I managed to get some quality sleep for a few hours, before waking up at 0200H for the summit assault. 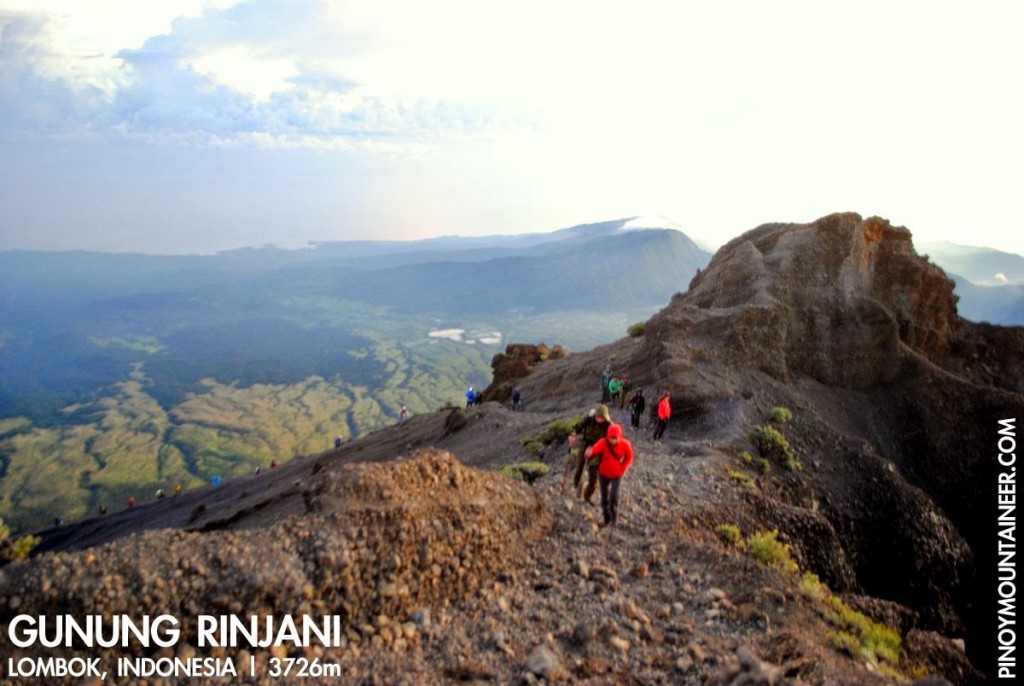 The nocturnal timing of the assault adds to the challenge, but it is the pragmatic choice, in many cases. Assaulting a volcano – bereft of trees – when the sun is up – will make, in Niel Dagondon’s words, “human goreng” out of us. In other places – the melting snow will be a problem. On the other hand, there are other mountains where the only reason to hike in the morning is to catch a glimpse of the sunrise – and indeed, as Gunung Batur proved, this is often reason enough. 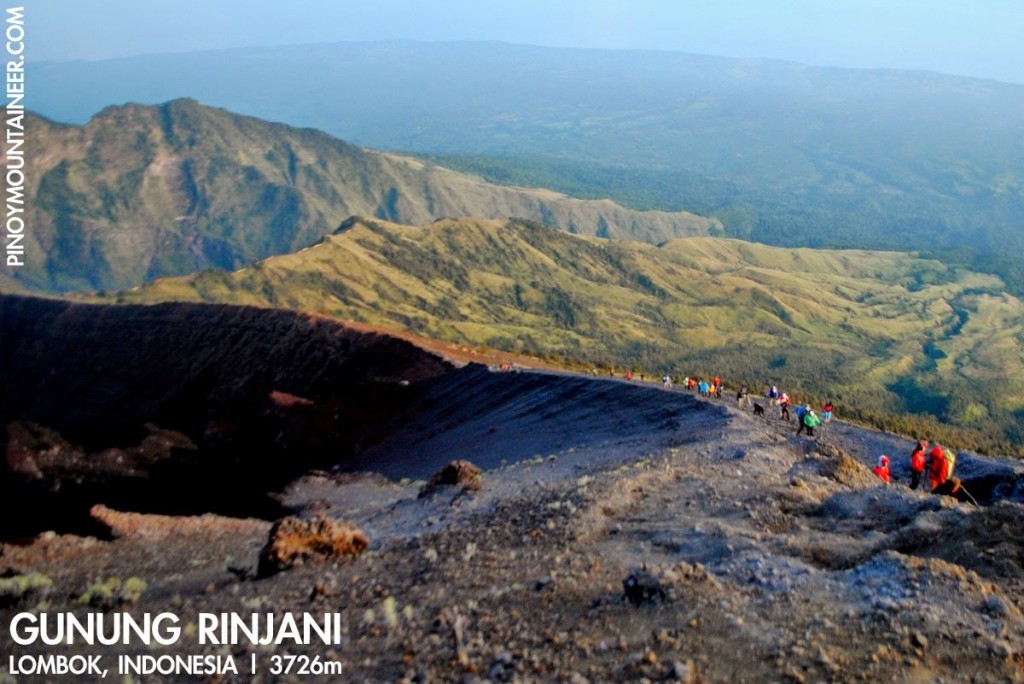 We started trekking at 0230H, approaching the end of the rim in ten minutes and then going for a steep hike to reach the start of the long saddle, taking 30 minutes. From the saddle the hike was gradual, and the scree – volcanic rock and sand – was beginning to reveal itself. Colossal yet coastal, Mt. Rinjani’s winds made the temperature much colder than the projected 8-10 degrees Celsius. But with adequate clothing, the cold can be confidently confronted. 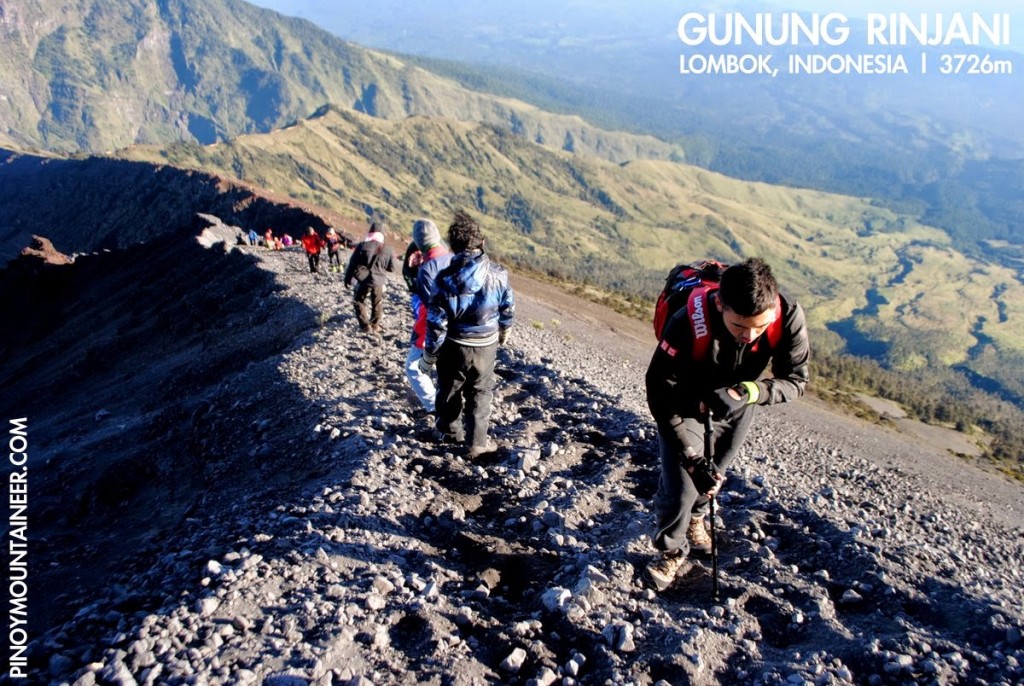 The scree slopes culminated on the final leg, which is much steeper; here, the “one step forward, one step backward” joke is no laughing matter; one must exert extra effort in every step. It reminded me very much of the Holy Ridge in Taiwan, Stok Kangri in India, or even Fuji-san  in Japan. In Fuji, though, the trails were so wide; in Rinjani danger is just a few meters away. Hence, I would call this the crux of the trail. 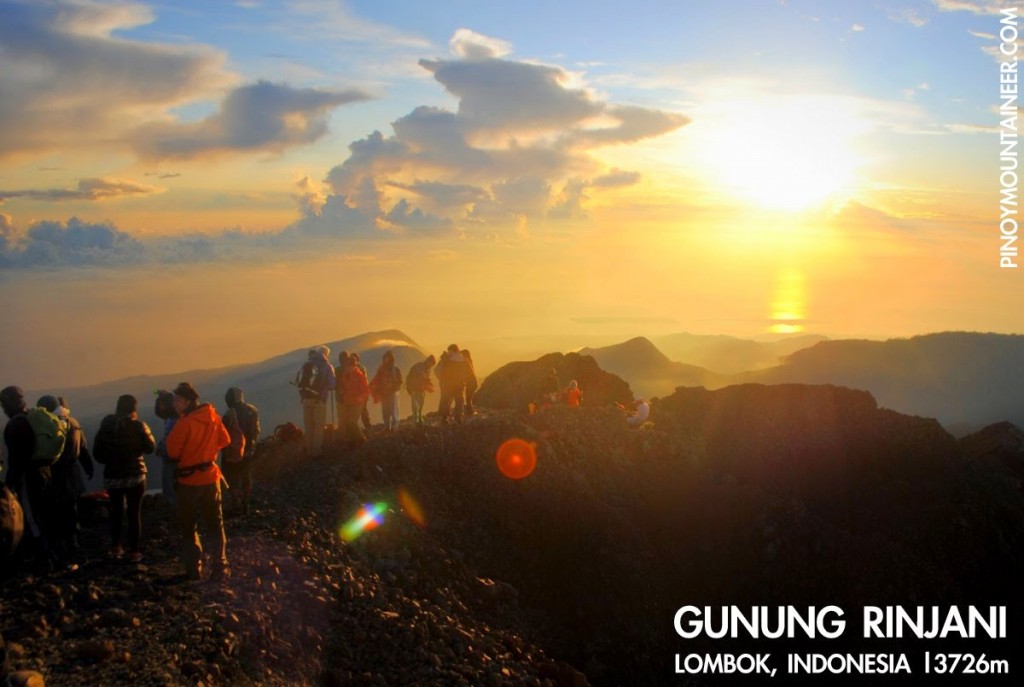 By 0625H, we had reached the summit. The sun had already risen, but the soft, early morning light still made for a wonderful panorama.  The view was expansive: We could see the entire ridge whence we ascended, all the way to the crater rim campsite – with tents looking like dots of orange and yellow. Then, beneath, the crater itself – Rinjani’s child – hence Segara Anak – came upon us, still in the shadows, but already revealing itself but the visual centrepiece of the mountain. 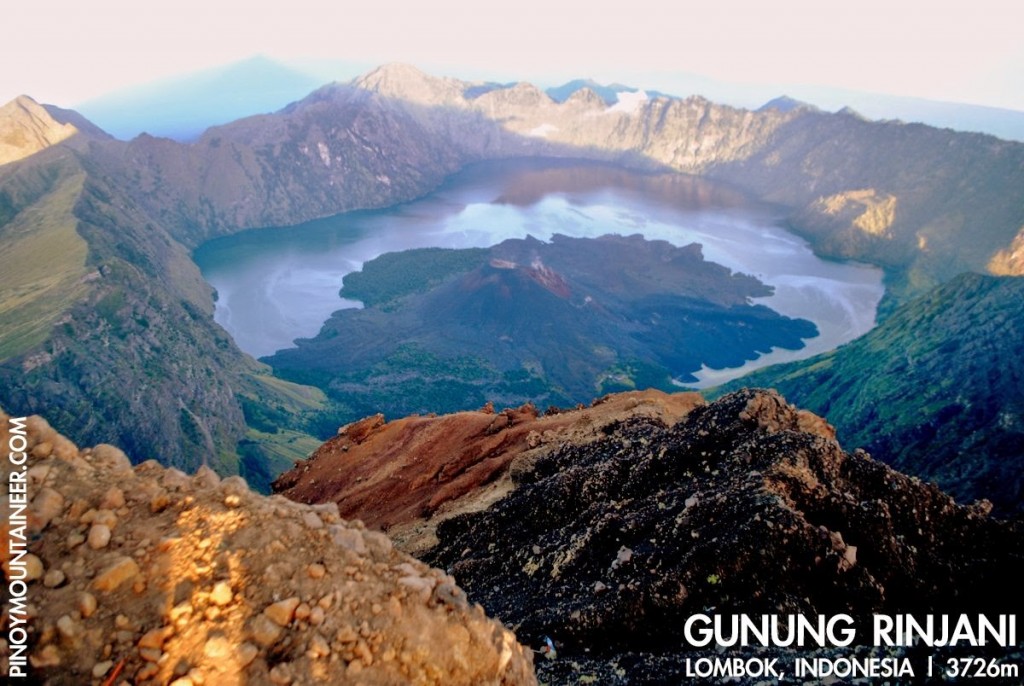 Perhaps the islands east of Lombok were too far for our gaze, but to the West, standing proud, was Gunung Agung, the highest mountain in Bali, which we already met in Gunung Batur. A more intimate encounter is in order, I hope, when we go back in Bali! 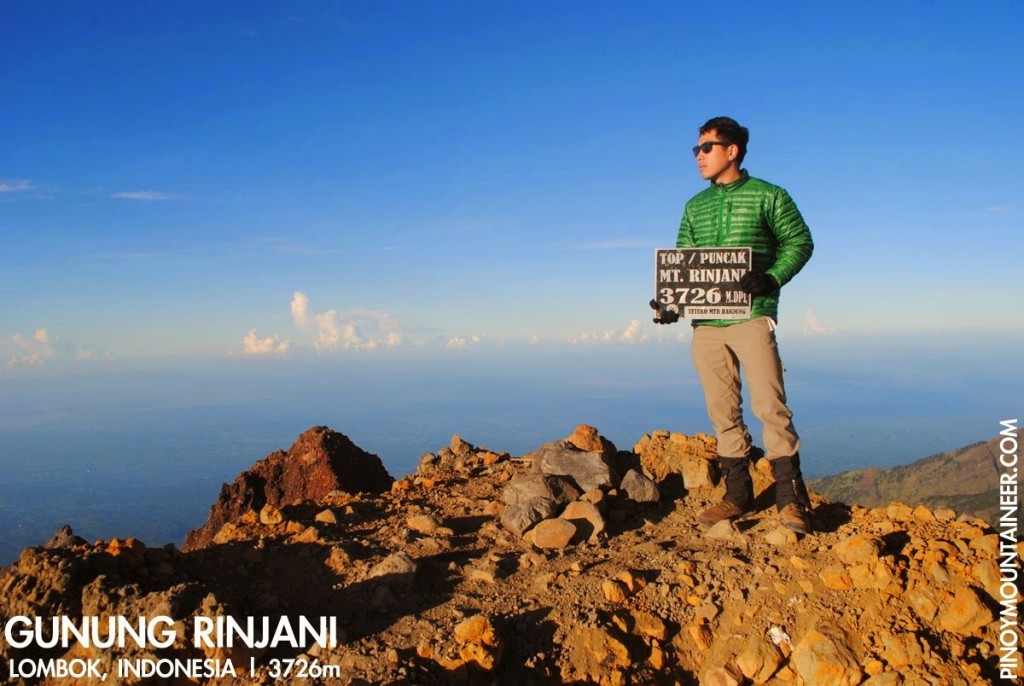 People had already congregated at the highest point, where two detachable (funnily enough) markers were at hand for people’s photos. Of course, we too had our share of photos – it was a triumphant moment for the whole team; and there was lots of reasons to find inspiration. 65-year old Edmund Padua, for instance, was at hand, inspiring Filipinos and Indonesians alike. I could see emotion in the faces of our arriving teammates: it was truly a challenging ascent but the summit made it all worth it. 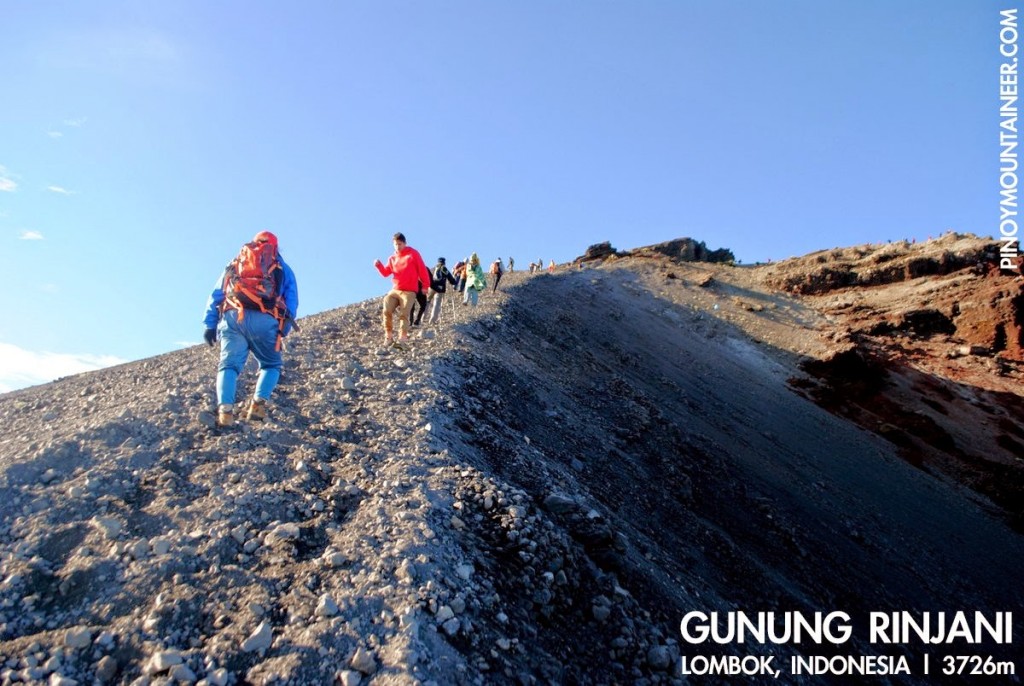 The sun rose, quickly it seems, and before long instead of the chilling winds we had to grapple with the nefarious heat of the tropical sun – or, as the Indonesians call it, matahari. The scree slopes made for an easy slide down the ridge, cutting trekking time significantly; it only took hour and fifteen minutes for us to reach the campsite – and en route, the sight of Gunung Agung at a distance and the lake beside us were most encouraging. 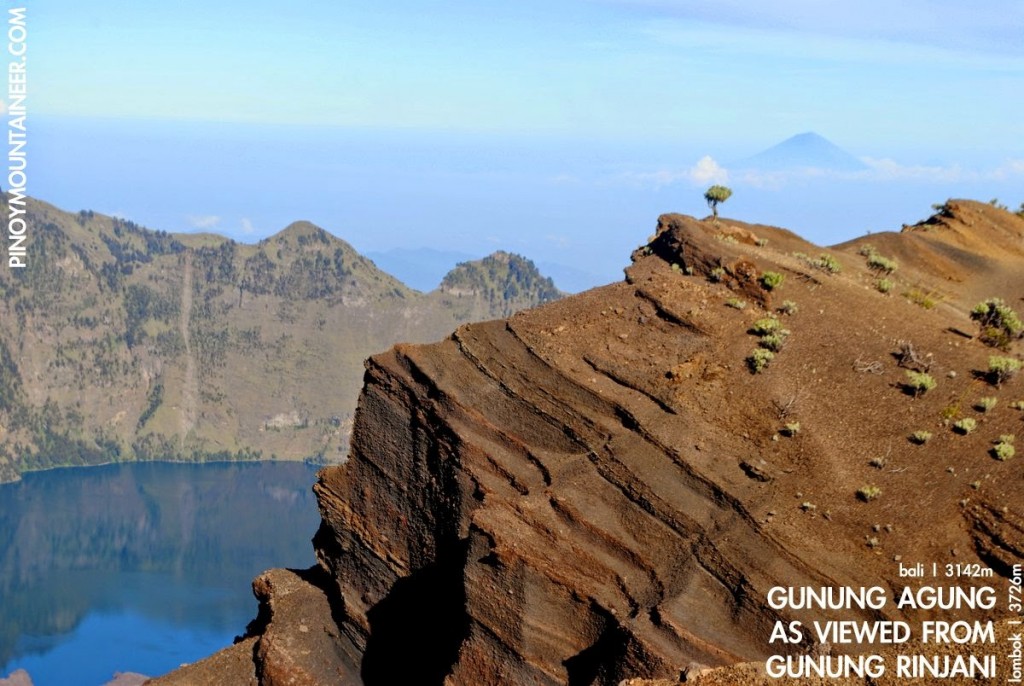 At the campsite, we were given a light meal – and a final opportunity to enjoy the view – before we started the descent back to Sembalun village. The descent was taxing, not because of the trail but again because of the heat. It was like descending from Cinco Picos or Balingkilat on a hot and cloudless April day – the higher altitude notwithstanding. 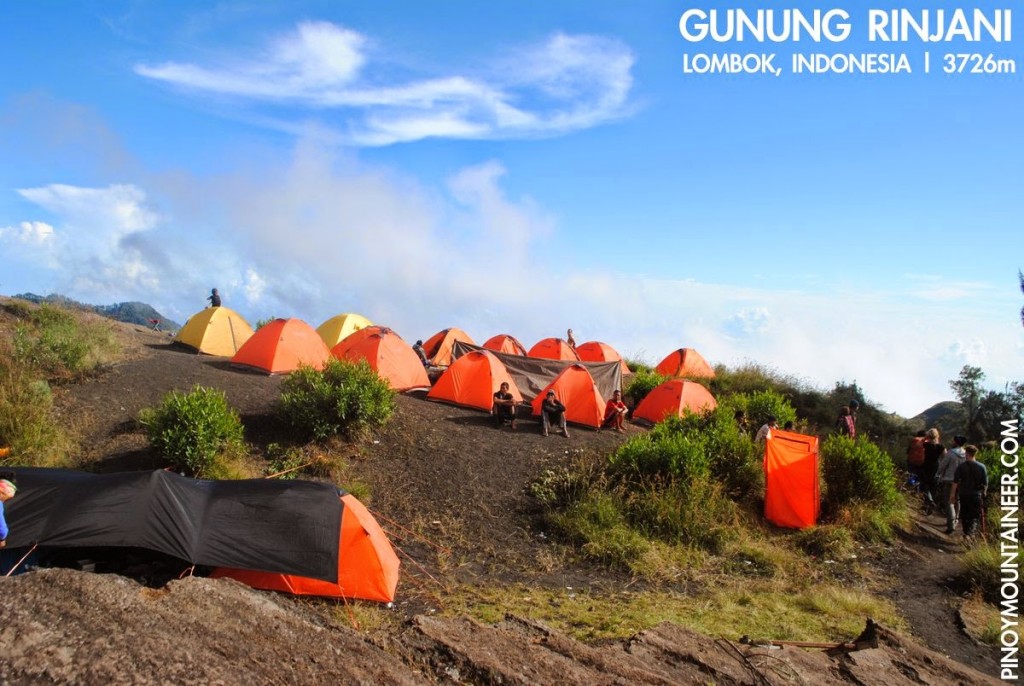 By mid-afternoon, we started arriving back at the village, and the discomfort brought by the heat quickly gave way to the fulfilment of having completed Mt. Rinjani – truly one of Southeast Asia’s most famous treks – blessed by good (at times too good) weather throughout our trek. A three hour drive took us back to Senggigi where we had a celebratory dinner and a well-deserved sleep. Thank you and congratulations to everyone who joined the hike! Terih makasih! 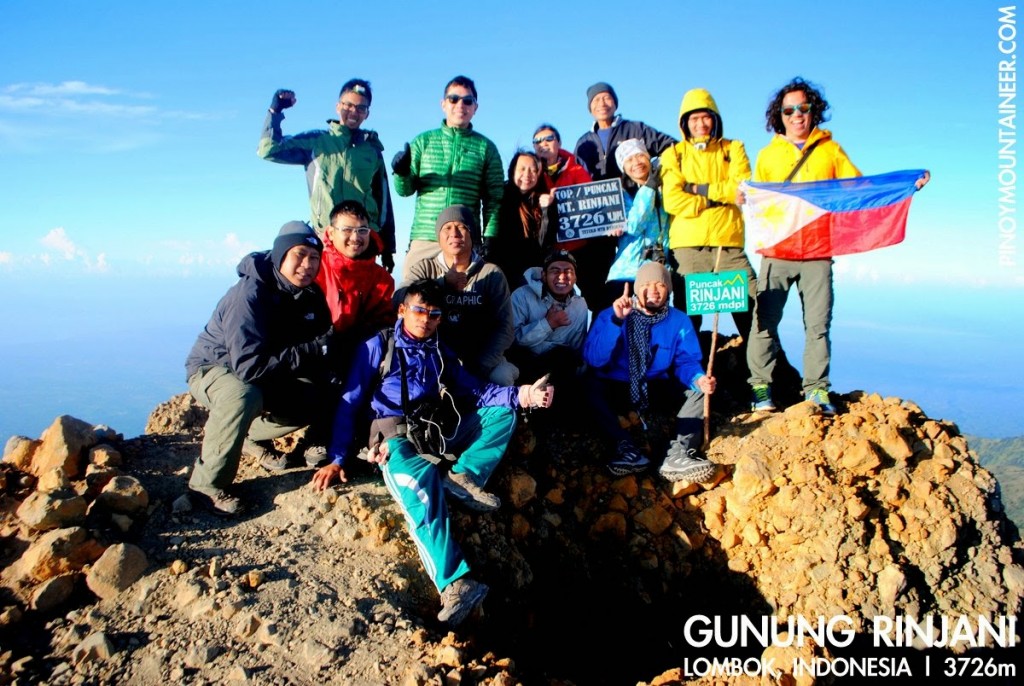 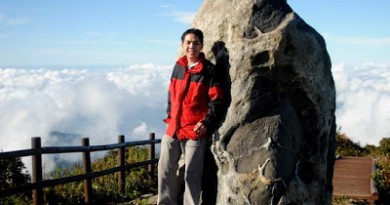 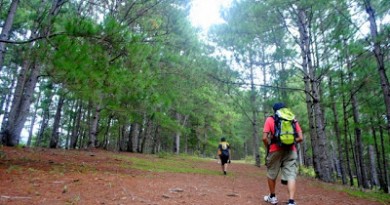 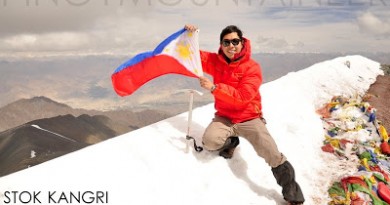