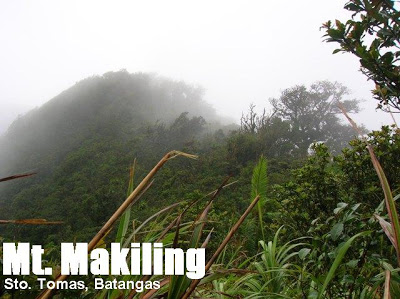 BACKGROUND
Much more challenging than the UPLB trail are the trails on the south face of Mt. Makiling, arising from Sto. Tomas, Batangas. The forests teem with limatik and poison ivy and the trails are labyrinthine, spawning a lot of entry and exit points. Moreover, the precarious location of the trails have taken its toll on climbers, causing injuries and even deaths in the past. These elements of danger must be considered by anyone who dare enter Makiling on this side. The rewards, of course, are great: after crossing this difficult trail, going down via UPLB is relatively pleasant, especially during the summer months. The sights along the way, especially in Haring Bato and later in Melkas Ridge, encompass much of Batangas province and the vicinity, including Mt. Maculot (S); Mt. Malipunyo (SE), and Mt. Banahaw (ESE).

‘Maktrav’ has become the nickname for the Makiling Traverse, and such is the itiner 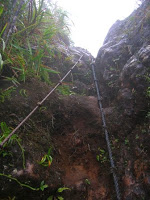 ary detailed here. It is commenced on plain ground of rural fields: patches or fields of bananas and corn, and segments of cogon grassland. PinoyMountaineer has isolated two major trail variants of the Sto. Tomas trail. The more often used is the west trail, which is more outlined in the internet as passing landmarks like the Palanggana campsite and peak. The other – the Sipit Trail, goes straight to the Melkas Ridge (Gubatan) campsite. The two have relatively similar time requirements. From the campsite, one will cross the Melkas Ridge itself – some of its parts have ropes to assist you since this is the most precarious part of the trip. At the end is Peak 3, from which another challenging part of the trek begins – the ‘ Wild Boar Trail’ which ultimately leads to Peak 2, or the summit of Mt. Makiling. From here is an easier, more familiar descent via the more commonly used UPLB trail.

After the UPLB trail was closed as an entry point in 2007, there has been renewed interest in the Sto. Tomas trails. An action-packed dayhike, traversing Mt. Makiling, is likewise gaining popularity. Considering the difficulty of carrying heavy packs across Makiling, a dayhike is a good option — and although there have been several failures in the past (including the blogger’s), it is worth a try.

Notes: (1) There is confusion as to where the real Haring Bato is — whether it is part of Melkas Ridge or down the line in the Palanggana (West) trail. (2) Gubatan campsite is assumed here to be the same as the Melkas Ridge campsite. (3) The clearing surrounded by cogon right after Melkas may very well be Peak 3, and perhaps this is also Mt. Cornites. Accounts in the internet are conflicting and PinoyMountaineer will update labels in this itinerary as soon as they are verified/rectified.

SPECIAL CONCERNS
The full establishment of the Sto. Tomas trails have yet to come; as of Jan. 2008 the trails are still in poor shape and there are many reports of getting waylaid along the way. Others may attribute their experiences to spirits dwelling in Makiling but in truth, the trails are really confusing. Trails signs are present especially the West trail, usually in form of ribbons, so be watchful (other ribbons have become faded). You can try arranging for guides in Brgy. San Miguel, although no established guide service exists.

Limatik and poison ivy are major concerns also. You may want to have a look on the Limatik FAQs page for more information. As for poison ivy and other noxious plants, a full-cover clothing is recommended. Insect repellant is also highly recommended.

Wild boar traps are said to be in place in some of the hunter trails, so you have to watch out for this. This is also one of the possible pitfalls (literally) of following an alternate track.

As of Jan. 2008 the ropes at Melkas Ridge are still in good condition.

TRIVIA
The blogger unsuccesfully attempted a traverse of Mt. Makiling on Jan. 12, 2008. It was day of continuous rains, and two limatik entered his eyes, one on each eye! The other was manually removed by a friendly villager on his way down, and the other left on its own during his sleep on that night. He also sighted a vine snake (2 meters long) and a horde of goats sheltering from the rain.

Reportedly there are also cults in the Sto. Tomas side of Mt. Makiling, akin to those in Mt. Banahaw, and sometimes they can be hostile or unfriendly. 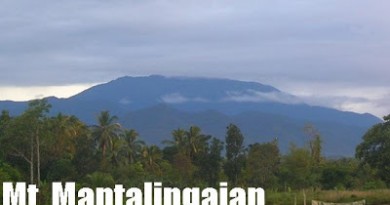 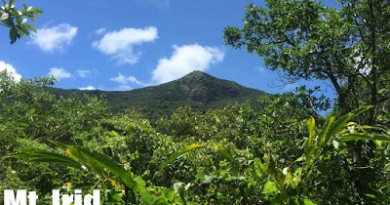 As of 18 JAN 2015, the traverse trail from san felix ecopark is not allowing treks to makiling even if you don't intend to do a traverse (peak 3 and back). I commend the people manning the entry as they are very law fearing and respect rules that are set by the governing body of the makiling park – that is UPLB. Kudos to these government foks, at least someone from the government is abiding by its laws despite the financial gain that they may have had if they do otherwise.

This post should also provide a solid update on the status of Maktrav. Hope this is of help to anyone who's looking for an update.

many Thanks Mountaineers and Sir Gids.. 🙂