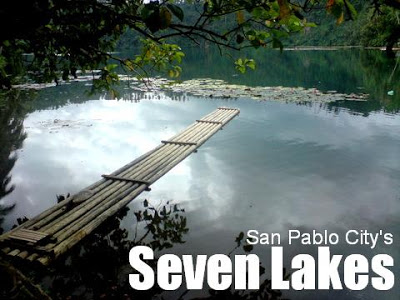 This destination is available in PinoyMountaineer Tours. For 2009 tours, the blogger, Gideon Lasco, himself will guide participants to his hometown. For bookings and inquiries, contact us at info@pinoymountaineer.com. 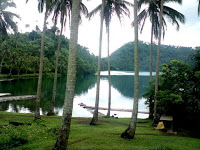 A beautiful yet undiscovered trekking destination near Manila are the famed ‘Seven Lakes of San Pablo’: Sampaloc, Bunot, Calibato, Pandin, Yambo, Palakpakin, and Mohicap. These natural wonders are set in the backdrop of San Pablo’s rural outskirts, surrounded by mountains such as Mt. Cristobal and Tayak Hill, Mt. Kalisungan, and Mt. Mabilog. Their pristine quality range from Sampaloc Lake whose cleanliness is still a work in progress, to the serene cleanliness of the twin lakes Pandin and Yambo. 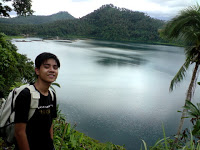 The seven lakes hold a cultural significance for the old folk of San Pablo, and legends are ascribed to each of the Lakes. The most famous of these tales is that of the “Legend of Sampaloc Lake”. It tells of a couple who owned a sampaloc tree bearing sweet, delicious fruit. They refused to give some fruit to a passing poor woman. Actually a fairy, the woman punished the couple by drowning their domain, giving birth to Sampaloc Lake. As for the fruit, it turned sour ever since. Each lake will have its legend – Pandin and Yambo were said to be lovers once, and Calibato was a princess who would rather drown her own domain rather than be destroyed by man’s activity.

Meanwhile, the geologic explanation of the lakes’ origins is equally fascinating. The lakes, scientists say, were craters of ancient volcanos. They form part of what is known as the “San Pablo Volcanic Field” – which includes other mountains in the area such as Mt. Makiling, Mt. Kalisungan, Mt. Atimla, Imoc Hill, and Mt. Mabilog.

All seven lakes can be visited in a single day, in a roadtrip that will take you to the beautiful wonders of San Pablo. The initial lakes line the road to Nagcarlan and other towns in the eastern, more inner section of Laguna. First is a quick stop to Bunot Lake, then proceeding to the farthest lake, Calibato. It is said that there is a small waterfall nearby this lake. Then comes the highlight, the twin lakes of Pandin and Yambo. Here the waters are clear enough for swimming; the view is truly pristine and refreshing. You can rent bamboo rafts to go around the lake. Yambo, the further lake, is perhaps the most untouched all the seven lakes – and also the most beautiful. A trail leads to this lake from Pandin. Two other lakes are close to each other, Lake Palakpakin which is just beside the road and Lake Mohicap, another lake clean enough for swimming. A visit to Sampaloc Lake wraps up the day.

While at the lakeshore taking pictures, take note of the mountains in view, most notably Mt. Cristobal. If you are in Sampaloc Lake, the green slope of Tayak Hill stands out against the blue mountain. Mt. Cristobal is also nice to view in Calibato and Bunot. Take note also of the smaller mountains around, such as Mt. Mabilog, Tayak Hill (it is exposed from Cristobal when in Pandin/Yambo), and Mts. Kalisungan and Atimla. 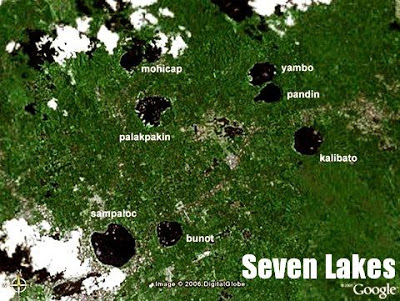 SPECIAL CONCERNS
No guides/permits/fees are necessary for any of the lakes, although the locals of the Pandin/Yambo area offer to guide visitors. They also offer to rent bamboo rafts (P75?) and a large floating raft where you can have a picnic (P500,negotiable) that will take you across Lake Pandin to get closer access to Yambo, and back. Some groups in San Pablo also offer guide services. But taking public transport will eliminate the need for guides since the tricycle drivers can show directions. On the other hand, going around by one’s own vehicle is very relaxing. If you have questions, just ask around. And don’t forget to bring a roadmap.

The above itinerary can be achieved faster if taking private transportation. If so, the same sequence and itinerary applies, although it will be quicker. When navigating your way across San Pablo, be sensitive to one-way streets (there are many of them and there are no signs).

Don’t forget to bring a change of clothes for swimming. Although people swim in all of the lakes, in terms of cleanliness PinoyMountaineer only recommends the following lakes for swimming: Pandin, Yambo, and Mohicap.

The trip only involves minor trekking – most notably the trek to Lakes Pandin and Yambo. Except for possible muddy sections, the trek is very easy.

TRIVIA
All seven lakes can be viewed from at least two mountains in the area. From Mt. Kalisungan, the direction is S; from Tayak Hill it is NW. You can also see the lakes in Mt. Banahaw (W); theoretically you can also see them from Mt. Cristobal (NW) although viewdecks are scarce.

Check out also the blogger’s account of his trip to the Seven Lakes in Hiking Matters #20 and Ivan About Town. 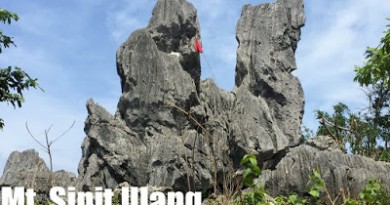 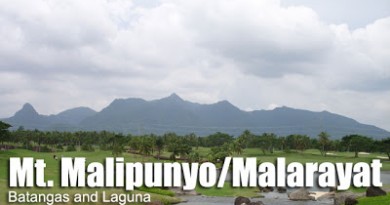 30 Comments on "The seven lakes of San Pablo"

Is it possible to visit the lakes when you are in a wheelchair?

my kids and i (total: 4 pax) are interested in this nature trip by first week of april, most probably.

just a breather after school, and before we go full blast preparation for my daughter's may wedding.

how much will this cost us? we need a knowledgable tour guide; we opt to bring our car to the meeting place.

thanks very much.
Prof Liza

My brother, his son, their dog and I did the Yambo, Pandin and Calibato circuit in November last year… cross country, no maps, relying on the kindness of strangers to point us on our way. We started in Sto. Angel and bushwacked our way through Nagcarlan, to emerge next to the highway in Rizal, Laguna (no Globe signal in this neck of the woods)… some seven kilometers… took the jeepney down to Calibato, and through the old quarry cum firing range, down the gorge to the Lake of the Stone Sword (Calibato). A thrilling experience… only took us five hours and we were back at our house in San Pablo by lunchtime.