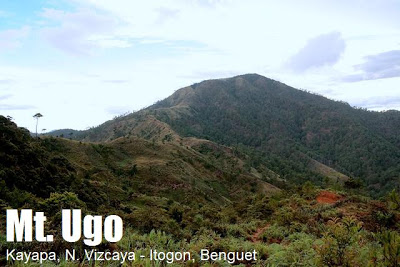 Considering the improved road conditions and easier access to Kayapa via rented jeepney or even by public transport, as well as an expedited descent with the jeepneys able to reach all the way to the “waiting shed”, PinoyMountaineer.com recommends a two-day itinerary for Mt. Ugo starting March 2012.

BACKGROUND
Mt. Ugo (sometimes Ugu) is a major destination in the Cordilleras. Although its elevation is low compared to the lofty heights of Mt. Pulag and Mt. Napulauan, it has stately pine forests and spectacular views similar to its higher counterparts. Also, the traverse connecting N. Vizcaya and Benguet is a challenging trail that serves as the southeast entrance to the Cordillera mountain chain – opening possibilities such as a traverse to Mt. Pulag.

This mountain was “discovered” in the aftermath of a PAL aircraft crash on June 26, 1987. Flight PR206, a Hawker Siddeley HS-748, bound for Baguio, crashed in the slopes of Mt. Ugo while attempting to land in a monsoon, killing all 50 people onboard. Rescuers, including mountaineers, found the wreckage five hours after the crash, 200 yards below the summit. Subsequent operations paved the way for trails, and soon, word spread about a new hiking destination. Today, hundreds of climbers climb Mt. Ugu yearly; there is an established guide system, and the mountain is one of the more popular hikes in the Cordilleras, together with Mt. Pulag, Mt. Amuyao, and Mt. Napulauan.

Another plane was said to have crashed in the mountain during the 1960’s…ghost stories are often attributed to the victims of these crashes. Long before the age of airplanes, however, Mt. Ugu has been associated with danger. Jovanie Claver, writing in the provincial website of Benguet, explains that the name “Ugo” was derived from the Ibaloi word “Ugoan” which means “to cut the neck”. Oral tradition has it that Mt. Ugo was the site where the invading Spaniards were killed, in the fashion in which the mountain was named. Although with a somewhat violent etymology, Mt. Ugo can be seen as a monument to the fierce determination of its people to defend their freedom and way of life. In many ways, they have succeeded: until now mountaineers can have the experience of interacting with the locals’ unique culture. The villagers are very hospitable. They would even offer food — including their delicacy, goat meat. 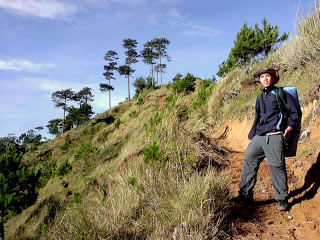 The Kayapa to Itogon traverse, pioneered by AMCI, is a 2- to 3-day trek. It begins at Kayapa proper. The first leg, requiring 4 hours, comprises of open trails with some pine trees and a steep latter part. It leads to Indupit village, where you can have lunch or stay overnight at the elementary school. Beyond the village, an hour of trekking will pass you by Mt. Samiento (1730 MASL) before reaching a major stopover, Domolpos village (4 hrs from Indupit). Here you can refill water being the last source before the summit. From Domolpos, the summit is just 2-2.5 hours away. The trails in this last leg are set first on pine forests, and then a brief stint on a mossy forest before reaching the summit (2130 MASL). A metal sign marks the summit, indicating that it’s within Brgy. Tinongdan, Itogon. The measurement is 2086 MASL although wide discrepancies exist.

At the summit, major Cordillera mountains can be seen as you face north: Mt. Singakalsa (N), Mt. Pulag (NNE), Mt. Tabayoc behind and beside it, among others. The other Benguet mountains NW may be obstructed and are too distant; Mt. Napalauan (NE) is eclipsed by Mt. Pulag. Prominent also is Mt. Sto. Tomas (W) and Baguio City. On a very clear day, a faint Mt. Arayat (S) can be seen. To orient yourself at the summit, the trail from Kayapa is NE; the trail to Itogon is W. The marker can be found at the south – where scenic views are also visible.


The return trip commences with a steep descent on pine forests, followed by rolling trails. First major landmark is the Old Sawmill, around 3.5 hours away. From there to Lusod village is another 30 minutes. Finally, the final 3-4 hours will take you to Itogon, and then to the barangay hall where a chartered jeepney can take you to Baguio City en route to Manila.

ITINERARY
KAYAPA-ITOGON TRAVERSE
(This is a reversible itinerary: you can choose to reverse the sequence of this itinerary for a Itogon-Kayapa traverse) 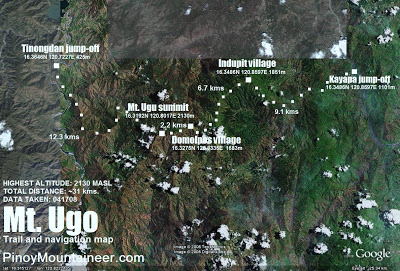 SPECIAL CONCERNS
Active in promoting tourism and managing Mt. Ugu as a hiking destination is Ma’am Liza Diase, tourism officer of Itogon. She may be contacted through following numbers: +639167445628 or +639105482678. She can help you charter a jeepney and arrange guides.

A jeepney can fetch you in Lusod, on the waiting shed; however, if the roads are muddy during the rainy season, the jeep may not be able to go all the way to the end of the trail; you have to walk further down. Although there are steep parts, the trails of Mt. Ugo are generally benign. There are basic facilities in the villages (i.e. CRs, faucets) but electricity is non-existent in these distant parts. As for water sources, the villages have them but none in the summit. Cellphone signal is present in the summit and parts of the trail.

Cold weather is a concern but temperatures don’t go as low as those of Mt. Pulag or Mt. Amuyao.

TRIVIA
Iowak and Kalanguya tribes inhabit Mt. Ugo whereas Ibalois in general are the major ethnic group of Itogon. The main livelihood is mining; this is evidenced by the mines such as the Balatoc gold mines. Logging was also a major industry, nearby nearly denuding the mountain. The old saw mill is but a remnant of this past- in which, allegedly, cable systems transported wood down the mountain.

An interesting feature of the Mt. Ugo trails is the wooden gates that you have to open and close. Perhaps this has something to do with the cows which use the sloped grasslands as their grazing area.

Wild berries, called dusong (Vaccinium barandanum) grow in Mt. Ugo. More interestingly, a land crab (probably Cardisoma sp.) was spotted on the forests of Mt. Ugo! This was reported in 2007 by Sir Emman Palacio and his team. If confirmed, this is a great biological find! 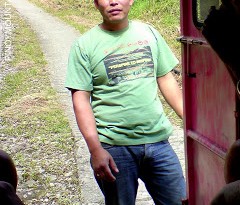 Hi. Would like to know if in Mt. Ugo they also have tents for rent like in Mt. Pulag? How much? Thanks.

At Tagpaya Campsite in Kibungan Circuit, we saw "Cardisoma"crab. We were wondering how does that crab managed to be in that place, but after reading this blog, i was surprised when I read that there's such a "Land Crab" in this region.

sir!,, what if i'll be the one who climb mt.Ugo without guide and regestration fee, accept ba?..