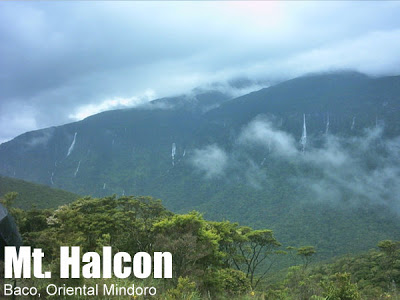 Blogger’s note (March 12, 2015): Mt. Halcon is now open! Until May 31, that is. Given the fact that the new rules might take some time to “stabilise”, sending an advance party to get permits on a weekday seems like a prudent option rather than just going there directly. If going there directly, best to arrive on a weekday and allot an extra day for contingencies. Thank you Kat Ocol for the updates!

BACKGROUND
Rising to 2582 MASL in Mindoro island just south of Luzon, Mt. Halcon is one of the majestic mountains – and best hiking destinations – in the Philippines, featuring long, often steep trails through dense jungle, crystal-clear waters from its rivers, as well as a magnificent ultramafic summit. Halcon’s biological profile is equally prestigious, being home to a lot of endemic flora and fauna.

Mt. Halcon is also one of the most storied hiking destinations in the country, being traditionally regarded as the toughest hike in the country and an “initiation” for serious mountaineers. Indeed, many “old school” hikers will have tales to tell about the mountain. At the height of Typhoon Katring in November 1994, hypothermia claimed the life of 25-year old Neptali Lazaro, and ten years later,  21-year old Prana Escalante was reported as missing while on a solo hike attempting to follow her teammates and her body was found a week later. Halcon is a long and challenging hike most of the time, but these accidents speak of the fact that it can turn treacherous in bad weather.

In 2006, the local officials and the DENR closed Halcon, purportedly to give the mountain time to recover from trash left by climbers. In 2013 and 2014, hiking activity resumed intermittently (the blogger managed to hike via the Mayabig Trail on May 2013). In March 2015, new policies were announced that would make the mountain seasonally open, from February 1 to May 31 to each year (see more details below).

One significant shift is that from the traditional trail, there is another officially sanctioned access point at the moment is through Brgy. Bayanan. Either trail takes roughly a day, passing through  tropical, sometimes mossy, forests before reaching the beautiful Aplaya campsite, which is surrounded by the mighty peaks of the mountain, from which numerous waterfalls trickle down.

The following day would be either an day-assault of the summit to make a three-day itinerary, or a day of trekking to camp at the campsite to make a four day itinerary. Past Aplaya, the next highlight would be the beautiful waters of Dulangan River and its upstream sources. Two small campsites are found near the river, one downstream (Camp 1) and one upstream (Camp 2). Beyond Camp 2, the trails are still well-established but quite steep, as I wrote in Hiking matters #344:

From there, the trail involved continuous ascents that were akin to the ‘Wild Boar Trail’ of Makiling – only with much longer, steeper ascents. The only way to go about it was to keep moving, keep climbing.

Finally, the hiker would go past the forest line to reach the ridges, which offer breathtaking views, stunted trees on ultramafic rocks, and spectacular, narrow trails. Though known as a “Knife Edge”, it actually doesn’t feel intimidating when you’re already there; the trails are not as narrow as the ones in Guiting-Guiting. There is, however, a bit of a crux in the form of a wooden ladder than one has to climb to continue the trek. Past the ladder, there is an epitaph for Neptali Lazaro, and a final 15-minute trek to the summit. Up there, on a clear day, the view is fantastic, opening up to the Southern Luzon mountains including Mt. Banahaw. As the highest mountain in the Philippines outside of Luzon and Mindanao islands, it is truly a lofty place, Sialdang in the local tongues.

In keeping with the traditional place of Halcon in the Philippine hiking scene, it is fitting that we allow the description of Long Henson, the father of itineraries, to stand. In his honor we are preserving his writeup for this respected high and formidable mountain:

During the rainy season, climbing may have to be aborted when flash floods sets-in making the trail crossing the rivers unpassable. Another factor that adds up to the difficulty of climbing is the presence of the Philippine limatik on almost 90 percent of the trail. These small leeches silently clings to your boots and makes their way to any exposed skin where they begins to suck the blood of their host. The bite however is painless but after sucking the blood, the blood then flows continuously from the victim for about 30 minutes due to an anti-clotting substance it injects when it bits you. It’s more of a messy uncomfortable feeling than pain. Last 1994, Halcon was in the headlines of the national newspapers due to the death of one of its climbers. It was caused by hypothermia due to the cold winds of typhoon Katring and inexperience in the part of the novice climber. Because of this incident, locals began monitoring and requiring permits to the climbers of Halcon.

It also proves that Halcon is not your ordinary “hike-in-the-park”. Climbing Halcon really demands months of preparation and proper planning to make the ascent not only a successful climb but more importantly a safe one. Though years of experience have shown that it’s not only preparation and planning that counts but it seems like the mountain chooses who will be able to set foot on its sought after summit.

Nature will always be a factor in the success of this climb. So it is best advised to climb it during the summer months of March to May to make the chances of success of the expedition the better. The hardship in conquering Halcon has a lot of rewards other than the feeling of conquering the Philippines hardest and setting foot on its sacred summit. The entire hike has a lot of wonderful sights and sounds to offer. It has unique and exotic flora and fauna, countless rivers and waterfalls, spectacular views, particular from the summit wherein you can see the entire island of Mindoro and the surrounding islands. In a clear day, you can see Banahaw, Maculot and even Mayon from the summit. Different terrain from rain forest to mighty rivers, mossy forest, bonsai forest and a wide variety of highland floras are some of the unique encounters. The contact with the natives will also give you a new perspective in life that is why it is advisable to take them as your guide.

Definitely, climbing Mt. Halcon is one of the ultimate in Philippine mountaineering. There you will come face to face with the question of why do you climb. And maybe come into conclusion that “mountaineering is the art of suffering!”

ACKNOWLEDGMENTS
Long Henson for providing information for the previous edition of this itinerary.
Kat Ocol for the updates in March 2015 (see more details in her blog post)