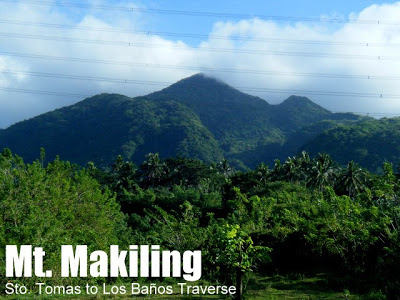 LATEST UPDATES
On February 21, 2015, after several months of closure, Mt. Makiling Traverse is open again. However, the Traverse will be closed during the Holy Week — but only for the duration of that week.

BACKGROUND
Perhaps the most challenging dayhike within the vicinity of Manila, the Makiling Traverse (which we first dubbed as ‘Maktrav‘ in 2008), pioneered by Sky Biscocho in the early 1990s, remains a popular dayhike, eventually leading to its recognition by park authorities as a legitimate trail that enters from Sto. Tomas and exists in Los Banos, Laguna. Through typhoons and other changes in the mountain, we have alternated our preference between two trails – Palanggana and Sipit – but this year, the authorities have declared that Palanggana Trail can no longer be used, as it sits on private property.

The attraction of Mt. Makiling lies in the well-preserved state of its forests, considering its proximity to Manila. Thus you will find it teeming with wildlife – not just the limatik (leeches) that make the hike interesting, especially during rainy season. Moreover, the Makiling Traverse includes a somewhat precipitous ascent in the Melkas Ridge (named after three early explorers of the trail) which is the most challenging part of the hike. The trails are narrow, requiring holding on to branches and trekking on root-scaffolded steps in the upper reaches.

The trail starts at Sitio Jordan in Brgy. San Miguel. The first part can be quite confusing, given the plethora of community trails. The approach up the mountain should be clear of agricultural activity, and is marked by ‘stations’, starting with Station 1 which lies beside an eroded river. Take the trails left of the eroded river. Station 5 up features steep trails, until you reach the covergence point with the Palanggana Trail (Station 7). Follow the rightward, ascending, forested trail that leads to relatively flat portion of the forest which include the Melkas Ridge Campsite.
MELKAS CAMPSITE TO PEAK 2

Melkas Campsite can accommodate a large number of hikers – perhaps this is evidence that the MakTrav was once a very popular destination for the mountaineers in the 1990s (camping is not officially allowed by park authorities as of 2013). In 2008 when the MakTrav was being rediscovered, mountaineers usually arrived at Melkas Ridge past lunchtime so they had meals here. However, with the improvement of the trails mountaineers can now easily reach Melkas by 1100H so the best (and more scenic) place to have lunch is now either the Melkas Ridge (which is 10-15 minutes above the campsite) or Peak 3 (1020 MASL) – the pinnacle of the ridge and one of the peaks of Makiling. Elder mountaineers used to refer to this grassy clearing as ‘Mt. Cornites’.

The trail continues, getting narrower yet still distinct. It takes two to three hours to connect from Melkas to Peak 2; the distal portion has come to be known as the Wild Boar Trail. This part of the trail is like an obstacle course which will require you to do contortions, body flexions and extensions in order to negotiate the paths. Finally after around 2-3 hours from Melkas (1-2 hours from Peak 3), you will reach the familiar grassy flatland that is Peak 2 (1090 MASL) – the summit of Mt. Makiling. 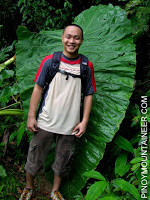 THE DESCENT FROM PEAK 2
From Peak 2 there are 30 stations marking the way down the UPLB trail; for a total of 8.4 kilometers. Landmarks include the roped segments at Stn. 28; the start of a big landslide at Stn. 26; etc. Occasionally, one would be offered glimpses of a northern view encompassing Los Banos and neighboring towns, as well as Laguna Lake. Still, however, the main attraction remains the beautiful forest.
After two hours of descending, one should be at the Makiling Nursery, which has stores that sell buco juice (P10) for a very nice and refreshing treat. The famous Mudspring – sulfuric vents of Makiling which is a dormant volcano – is just a 5-10 minutes’ walk away and could be a nice sidetrip.
From the Nursery one has the option to rent a jeep to take you down, or walk another hour to reach the UPLB College of Forestry. Since 2013, it is also possible to take a motorcycle (P70/person).  If you start the traverse from Sto. Tomas at 0700H, you can expect to reach UPLB by 1600H, but given the length and difficulty of the trail, bringing lights is a must, therefore, especially since snakes are known to periodically cross the rough roads. At the park entrance you can take tidy-up or take a shower. As of 2015, the UPLB side does collects an  exit fee for climbers taking the Sto. Tomas trail.
ITINERARY
Via Sipit Trail (as of 2013) 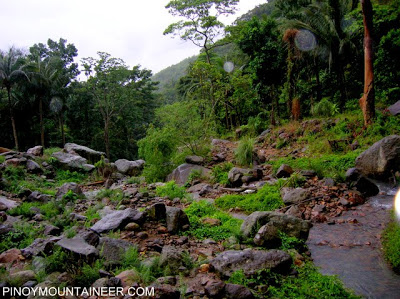 The Sipit trail is laden with rocks eroded from the mountain (Jan. 2008) 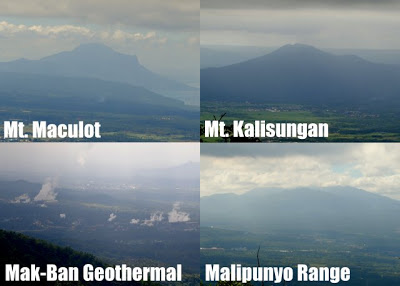 Views of nearby mountains from the traverse trail (Feb 2012) 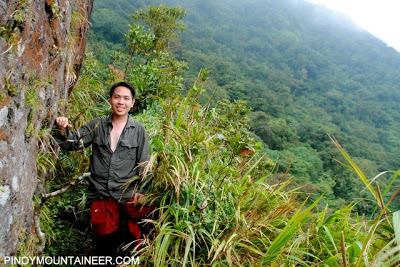 As the trail progresses towards Peak 2, it gets more and more narrow hence the term ‘Wild Boar Trail (Feb. 2009) 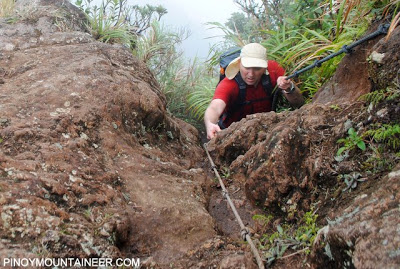 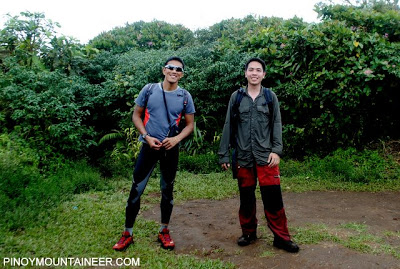 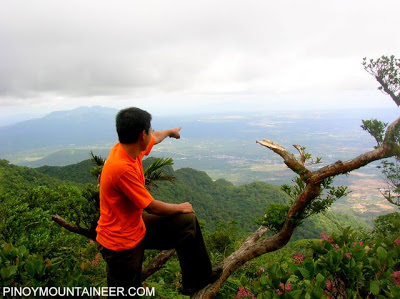 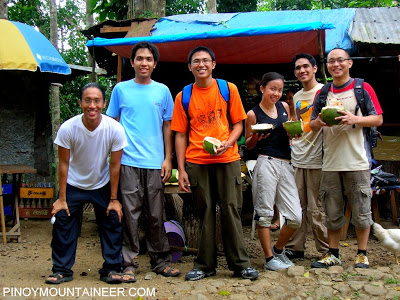 Enjoying fresh buko juice at the Makiling Nursery (May 2007) 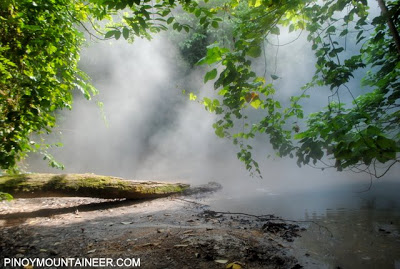 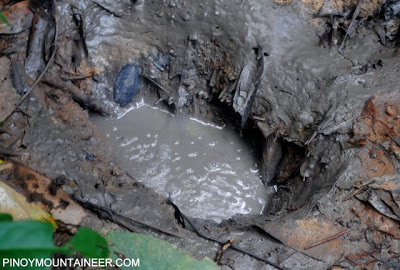 At the Mudspring – a nice sidetrip if you have enough time (Feb. 2012) 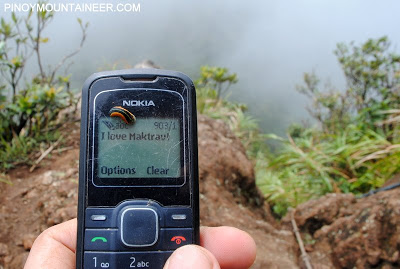 Loving Maktrav in spite of our ‘slimy friends’ that often accompany the hike. (Feb 2012)
TRIVIA
There are three peaks in Mt. Makiling. The traverse trail connects Peak 3 and Peak 2. Peak 1 has two locations. The Peak 1 known to mountaineers is also along the traverse trail but the official Peak 1 is only 900 MASL and can only be accessed at the UPLB trail at around Stn. 15. It is currently closed due to research.

The blogger unsuccessfully attempted a traverse of Mt. Makiling on Jan. 12, 2008. It was day of continuous rains, and two limatik entered his eyes, one on each eye! The other was manually removed by a friendly villager on his way down, and the other left on its own during his sleep on that night.

HISTORICAL FOOTNOTES
A previous version of this page (2009-2013) described the Palanggana Trail in these terms:

Two major paths converge to form the traverse trail, the Palanggana trail from Sitio Palanggana, Brgy. San Bartolome and the Sipit Trail from Sitio Sipit, Brgy. San Miguel. In the 1990s, the Sipit trail was the one more commonly used. But a series of landslides, culminating with Typhoon Milenyo in 2007, has made the Sipit trail difficult and at times inaccessible. Although Sipit is still passable (the blogger climbed up and down Sipit in 2008), PinoyMountaineer.com is recommending the Palanggana Trail. 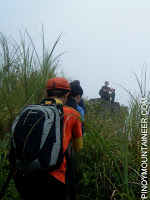 This trail originates from the barangay hall of San Bartolome where you will register for free. Take the cement road which goes on a northeast direction (bear in mind that NE is the way to go for MakTrav). It transitions into a rough road which narrows into footpaths that meander around dead creeks. The first landmark is the Bahay Kubo about 60-80 minutes from the jumpoff; this also counts as the last water source. Then, continue northward to reach the Palanggana Ridge – a series of elevated slopes with breathtaking southeast views and a ravine to your right. After Palanggana Peak, highest point in the ridge is reached, a descent into more forested areas is done and during this descent the convergence point with the Sipit Trail is reached. The combined trail then reached the Melkas Ridge Campsite. 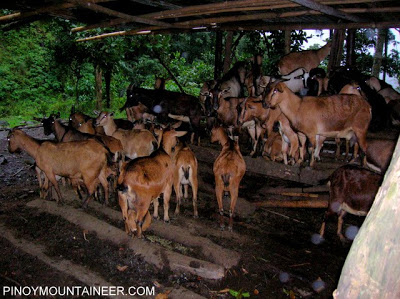 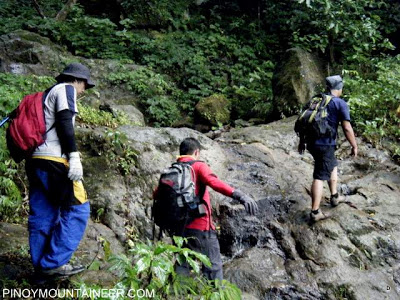 Fording the rocky formations up the Palanggana Trail (Nov. 2009) 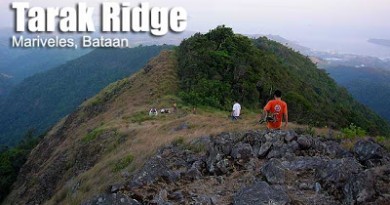